An Artist Exploring Her Guatemalan Roots 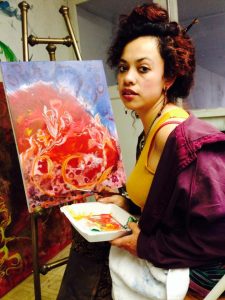 Evelyn was born in Quetzaltenango, Guatemala during the time of civil war. As a child, her mother stayed at home with the family and her father worked for someone trading Guatemalan currency into USD, often traveling to the Mexican border for work. Soon, however, word got out in her town of her father’s finances, and life became dangerous for him as people targeted him for muggings. She and her siblings were mostly insulated from what was happening on the streets or in the city and attempts to ask her father questions have been unfruitful because he doesn’t like to talk about it.

Her parents made a difficult decision to leave their children behind with their grandmother while they went to establish a safe and supportive home for their children in the Bay Area in California. This is when Evelyn’s experience as an immigrant began. It would be 2 years before Evelyn would see her parents again. Her only idea of America she had, was her parents telling her about Disneyland and promising to take her and her siblings there once they all moved there.

Finally after two years her parents came back to Guatemala to bring their children back to California with them. They started from nothing but had the help of her father’s family. In the Bay Area with various family members on her father’s side. Her mom and dad went through a revolving door of many jobs in the fast food industry until finally finding something more stable.  She became a Certified Nurses Assistant (CNA). Her dad ended up working in fancy restaurants where he made good tips. With both parents working, they made enough money to be comfortable and support the family.

In 1991 Evelyn and her family moved to California. As a 7 year old, Evelyn had to learn to navigate in a new culture and place. Her first impression is that she remembers being “fascinated by the escalators and street lights” which she never experienced in Guatemala. She found school challenging and felt like she was always one step behind because of the language barrier. Just as she was beginning to understand the lesson, the teacher would move on to the next one. Eventually she was enrolled in an ESL program and by 4th grade she was fluent in English.

Despite being uprooted from her culture at a young age, over the last few years Evelyn has used art as a means to connect to her culture and as a “catalyst to understand where she’s come from.”

She says, “I have acclimated to my environment by using my Art as a tool for survival, to create connections, and most importantly as a way to explore the trauma of being uprooted again and again. I have come to realize that I can use my art to be aphysical example of how Art can be used to transform oneself and to actually be what you want to see in a world that is becoming harder and harder to thrive in.”

In 9th grade she had a teacher that told her she could make money off her art, and that concept opened our perspective about what was possible with this talent and love for art she had.  At first she would sell small pieces that were made without a specific intention. Recently she says that she’s, ”Making pieces that help to tether me to the idea I have of where I come from.  Mayan textiles and customs represent the culture that I grew up in as well as the catholic deities I remember seeing on my grandmother’s altar. I’m now painting with more intention, using color schemes inspired by Mayan textiles and trying to understand the history of what was happening in my country around the time I was born.”

She and her siblings were mostly insulated from the war happening on the streets or in the city and attempts to ask her father questions have been unfruitful because he doesn’t like to talk about it. She says now, “I am using my art as a way to heal and tie the loose ends I was unable to mend as a child. I believe that I can also use it magically as a spell to get me back home. It is my goal to return to Guatemala.”

Because of her DACA status she has been unable to travel back home and is currently seeking citizenship so she can go back. Evelyn is the only one in her family that she knows of who has artistic passion. She uses this gift to tell her story as an immigrant and connect to a cultural identity she feels distant from.

Currently Evelyn works within the gig economy to make a living. She does everything from mural art and gardening in exchange for her rent, to playing music at local venues. During the summertimes she works full time offering henna body art at fairs, festivals, and events, sometimes traveling as far as Washington.

Between the intersection of ancestry and descendents, Evelyn finds herself, like many immigrants, desiring to stay connected to the culture and roots from which she comes from, and integrating into a new culture, environment and language. As an adult with DACA status and working towards citizenship, she has yet to visit her home that she left when she was 7, and uses art as a vehicle to explore herself to her Guatemalan identity as it relates to her American Identity.

Evelyn was interviewed by Lara Noel, a Santa Cruz, CA based volunteer for the Made Into America project.