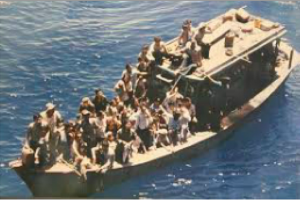 “We left our house with our small bag to go to the cargo ship knowing that I may never see my house again, and that we could be shot for walking the streets during the curfew.”

My uncle Tai was born and grew up in Cholon. Cholon was a district of Saigon which was the capital of old South Vietnam. His father was full blood Chinese, and his mother was half Vietnamese and half Chinese. Tai was a twin and the seventh child of his family, along with his 6 sisters and 3 brothers. Tai’s family lived in a one-story home where they all slept in one large bedroom together on the floor. There was no air conditioning or heater, so they had to open up the doors widely to let the breeze in their house during the day, and then at night they would close it for safety.  It is hot and humid in the summer and then cools down in the winter (there are only dry and rainy seasons in Vietnam as it is a tropical climate). They had no distinctive seasons just like we do here in the US.

Tai grew up during the war from 1962 to 1975. It was somewhat peaceful in Saigon (except for in 1968, when the Tet offensive happened where the North Vietnamese communist soldiers invaded Saigon for a short period of time). Every day you could hear the sound of the Huey helicopter flying back and forth to transport the soldiers to the front battle and wounded men back to the hospital. You also could hear the sound of bombs and cannons in the distance. Vietnam is a small country where the battle fronts were only about 40 to 50 miles from Saigon, but it seemed so far away at that time.  There were lots of orders and laws in South Vietnam at this time, and it was very stressful as well as it being scary every day.

Tai’s parents owned a building material business where they sold sand, cement, bricks and stone. They only had about 3 to 6 employees because it was very difficult to get employees where most of the young men were in that kind of service. Tai helped out during the busy days. For example, when they were low on employees, they had to ride tricycles to deliver material to all of the customers. Their business was open 7 days a week and it was never closed. They had a very good business and his parents were able to support all of their nine kids.

Tai’s family wanted to leave Vietnam and live with freedom in the USA but, they did not have any relationships with the American government. They could see the Chinooks flying on top of their head, evacuating the Vietnamese and American personnel from Saigon all day every day. They felt like caged animals that couldn’t get out. The North Vietnamese communist troops were coming fast. The South Vietnamese were poorly equipped as well as poorly armed, and they had also lost their will to fight. The communists were only a few miles from Saigon. But fortunately, him and his family had a friend who was a mechanic, who was one of the people to be on a cargo ship.

He came to their house during curfew (by this point the curfew had been 24 hours a day) so that they could let others know that his ship was planning to leave the country soon. The next day, everybody in his family started to pack one small bag with only necessities that they would want to have with them. They then left the house to Saigon port in a hurry, and then they boarded the cargo ship after they had packed up all of their necessities. It was an eerie trip to get to the ship because of the curfew where the streets were deserted. They knew that they could get shot for being out.

Once they boarded the ship, thousands of people started swarming the ship. They too really wanted to leave. It was about 6 pm on April 30, 1975, and Tai was 16 years old when this had all happened. All of his family, except for his father, decided to stay behind so that he can protect him and his family’s properties. Neighbors would loot your house if nobody was there, and in case they had to come back, they had to have a home. About 8 pm, the South Vietnamese naval fleet started leaving the Saigon port. The captain and the owner of the cargo ship decided to join them. They left Saigon via the Saigon River. The following day, thousands of people on the ship were transported to American ships at sea. It was a very chaotic time. His family and a few other families decided to stay on the cargo ship and sailed to Singapore. They ran out of food almost immediately and had to fish for survival.

It took about a week to get to Singapore. Once there, they were instructed to go to the American naval base in the Philippines where they had refugee camps. They stayed there for close to a month and then soon learned what their future would be like. They would be going to go to the USA and then were elated.  Finally after a month, they were flown to Guam in C 123 air crafts. They stayed in Guam for one week and were sponsored by the Church of Christ. This was the church that they were members of in Saigon. Soon they were flown to a refugee camp in Fort Chaffee, Arkansas. A week later, they rode a bus to the Church of Christ in Oklahoma City, Oklahoma.

Tai arrived to America in the summer of 1975 in Oklahoma City, Oklahoma on a Greyhound bus from Fort Chaffee, Arkansas. They stayed in small summer camp cabins which were rented by the Church of Christ. There were a few Vietnamese refugee families in these summer camps as well. After a few weeks, each family was sponsored for the Church of Christ. This system was designed to help the refugees assimilate to life in America. Now they were living among other Americans. They helped his older brothers and sisters to get the skills they needed to find full-time labor jobs. Tai was not old enough to get a full-time job, so they found him part time jobs and helped him enroll at Oklahoma Christian College when he was still only 16 years old.

He spoke a little English but it was a very rough time in college and a new life in America, because of the language barriers and severe culture shock. Everything there was totally new and different. Thanks to grants from the government, his brothers and sisters were able to go to college, and then his two younger sisters were able to go to elementary and high school. Tai worked many different part time jobs during his years in college. At one point, he was once a busboy, cook, garbage collector, an apple picker, and a math grader.

After a few months, and pooling all of their job incomes together, they were able to buy their own house and be independent of the Church of Christ. They had to assimilate to American life, food, culture, and weather fast, in order to survive. Their sponsor helped them from the very beginning, but they had to help themselves to be successful and to survive through it all. The American population had a good understanding and sympathy from what the Vietnamese refugees went through. Basically, Americans and South Vietnamese had lost the war together to the communists. There was some resentful prejudice and discrimination against Tai and his family and other Vietnamese refugees in general, but for the most part, they felt like they were treated like typical American students in college.

His family really believed in education and felt that with the kind of education that they got, their future would be so much more brighter. After a year at the Oklahoma Christian College, he transferred to the University of Oklahoma in Norman, Oklahoma. He graduated with a Bachelor’s degree in 1979, a Master’s degree in 1981, and then a Ph.D. degree in chemical engineering in 1984. He worked for Morton Thiokol, Inc. for two years as a senior engineer to help develop a solid rocket propellant for the Navy, Army, Airforce and NASA.

His twin graduated with a Ph.D. in Electrical engineering, his older brother graduated with BS in Mechanical engineering, one sister graduated with a Bachelor degree in Business and his younger sister became a Radiologist. Tai married my aunt Marilyn in Ogden, Utah in 1986. After two years of working for Morton Thiokol, Inc., he went back to school to earn his medical degree from Oklahoma University medical school. They now have four children and live in a house that overlooks the Puget Sound in Gig, Harbor Washington. Looking back, Tai appreciates what he has very much, as well as what he and his family has had to go through to get to where they are today.  Their life would be totally different if they did not make it to the cargo ship that day. He is currently working as a neuroradiologist in Seattle, Washington.

This story was written by a family member of the immigrant, a student in Palo Alto.