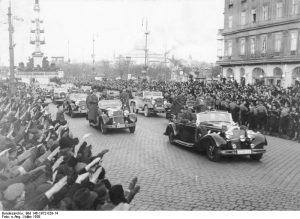 In 1938, a small humble family of Jews in Vienna, Austria, enjoyed their supper, but in a matter of seconds, their lives changed forever. A neighbor called them and told them to turn on their radio. They all listened closely to the static sound of the radio. Austrian President Wilhelm Miklas, announced that Hitler of Germany had given him an ultimatum to merge into Germany or be conquered.  Hitler and the Nazi army planned to bring Austria “home” to Germany, and all Jews were to be rounded up.

The Nazi army forced Jews to dig ditches and build roads. Paul Kent was the only boy in the house. He had to leave his home – leaving behind his parents and his five older sisters. Under difficult circumstances Paul was able to lie low a couple of days at his friend’s house. 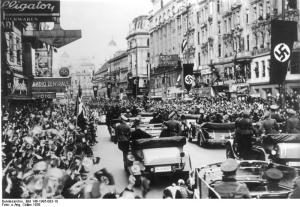 Paul  had family in the US and they agreed to send him an affidavit to enter the U.S legally. When the affidavit arrived, Paul immediately went to the US Embassy trying to stay out of sight as much as possible. At the US Embassy he was told that the US had already taken in the full quota of Austrians that year, so  he was unable to leave.

In less than a month, he was able to contact his grandmother’s brother in London. Once his visitor’s visa arrived he was finally able to be free and safe in England. On the other hand one year after he left, the Nazi army came to his family’s home. His parents, oldest sister and nephew were forced to leave everything behind – packing whatever they could into one small suitcase. They were squeezed into a small room with four other families with nothing to eat for a couple of days. Later, Quakers arrived and fed them. They were placed into cattle wagons and shipped to Poland. In Poland, they were put in trucks, with forty other people and were gassed to death.

In 1939 Paul received good news from his three younger sisters. Their postcard said they were able to get a visa to the U.S. from Genova, Italy.

When Paul first arrived in London, he was not able to work because a visitor’s visa did not allow that. He took on jobs that paid him under the table such as tailoring. He’d learned the basics of tailoring back in Austria including studies of materials, sketching and creating a garment.  After a couple of months he was able to get a job making women’s clothing. In London, he was able to obtain significant tailoring  experience with women’s clothing and men’s uniforms. After the war he worked exclusively in the men’s clothing business.

While, in London Paul met his future wife, Elsie, and married in 1945. Two years later, they had a daughter named Rosalind. In 1948, ten years after he arrived in London, he received a call from the US Embassy. His visa had finally come through. He would finally be able to reunite with his sisters.

When Paul and his family arrived in California, he recalls the beautiful mountains. The sun was rising as he read a “Welcome to California” sign. He settled in San Francisco with his sisters for the first couple of months. He worked at a men’s clothing store store for a while. His daughter  was diagnosed with polio, and the doctors recommended that they move to a different area. They bought a house in Palo Alto and they would go fruit picking on the weekends. It was a paradise of fruit orchards, where they would pick apples, cherries, apricots, peaches and more.

One evening, he was driving on the freeway and he fell asleep at the wheel. The car was demolished, and he woke up in a hospital. His wife Elsie, told him that he should no longer commute to San Francisco. Paul then decided to open a tailoring business. He went to Bank of America, but was not able to get a loan. The banker then suggested he partner with an existing tailoring business. He did so, but unfortunately, three years later his partner had a heart attack and passed away.

His partner’s son became the new partner,and they worked together and made the company flourish. Later, Paul bought his partner out, and he ran the business for a about thirty years until he retired. While, Paul was closing his store he suffered a heart attack. Seven years later he suffered but survived another heart attack.
Now, Paul and his wife Elsie live in the Moldaw Residences in Palo Alto enjoying each other’s company, their children, grandchildren, and great-great grandchildren.