Vietnamese Family After Escape Gets Sponsored by Church

When Lang opened the door to her new home, she found the house fully furnished, the refrigerator and cupboards stocked with Vietnamese food, rice, bowls, even chopsticks!  The church would take turns sitting with the kids whenever they went to ESL classes, even giving them a ride to the classes. 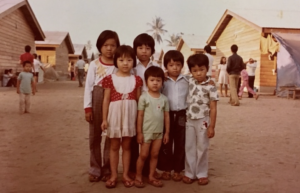 Back in Vietnam, “we lived a very good life,” said Lang. Her family were hardworking business owners who sold wood sealer, the kind that is used for sealing boats. At the time, the main mode of transportation was by boats, so their business prospered.

In 1954, Vietnam was divided into two Republics: The Republic of North Vietnam, which was led by a Communist government, and democratic led Republic of South Vietnam. Lang’s family lived in the South. The two countries were at war with each other, until finally, in 1975, the North conquered the South.

After the Communists invaded the South, they took over all businesses and banks, freezing their accounts, and rendering their currency invalid. The government told them to turn their money in or face jail time. The Communists took everything away from them, and gave each family the equivalent of $200 of “Communist” currency, and were rationed at the supermarkets, limiting their food purchases.The communists controlled everything. There was no freedom to worship. No freedom of speech. No freedom to do as you please. If anyone said something against the government, they would be arrested. There were many reports that their loved ones committed suicide while in jail, but the truth was they were beaten to death while in custody. Many who tried to escape out of the country either got caught were shot to death by the police; or died at sea when their boat capsized; or ended up in jail without trial.

They took over the churches and businesses, and installed loudspeakers on every street corner and ordered the South’s military and government officials to report to the communist offices. They were to be sent to the jungle to “re-education camps” where many died. For those that died, their families were not allowed to recover their bodies for burial. Millions of her people suffered and died because of the cruelty of the Communist regime. “This is why my family and millions of Vietnamese people risk our lives to leave the country,” said Lang.

Lang’s in-laws had said that they cannot live this way any longer, so they decided to escape. Back then there was a big wave of people leaving Vietnam. Because her family had bought gold, they were able to pay for the boat to help them escape. They had to leave everything behind, just the clothes on their backs. At that time, Lang had four children, and was also pregnant with her fifth baby. Her oldest child Jackie was 8 years old, with another daughter, aged 6, and two sons, ages 4 and 3. So Lang escaped with her family, in total there were 14 people on the boat: Lang, her husband Hung, their four children (plus the baby she was carrying); her husbands’  two parents, and her husband’s five siblings.

On January 8, 1979, Lang and her family left Vietnam and arrived in Malaysia seven days later. But their journey was not without tribulation. After being on the ocean for a day, the boat hit a rock leaving a gaping hole. They thought they were going to die. Her father in-law took his shirt off, and asked everyone for their shirts so that he could  seal the hole. Everyone had to keep throwing water out of the boat. After seven days at sea, not knowing if they would make it or not, they finally arrived in Malaysia. The Malaysian government transported them from the boat to shore, and then arranged for the family to stay at a Refugee camp in  Kotabaru, a small town in Malaysia. The Refugee camp which was formerly a nursery home.

There were about 300 people in the Refugee camp. After a year, there were over 1000 people. The United Nations gave money to the Malaysian government to help care for the Refugees. So, they were able to have food, clothing, and shelter. The UN sent a lot of canned food, which the Refugees would use to barter with the local people, who would bring vegetables to the gate. “The Malaysians liked the canned food,” she said,  which was mostly canned sardines and chicken. They ate sardines so often, they learned to cook it several different ways. “We called it our seven course sardines!” she said. “If you buy or make an exchange for some flour, you can make deep fried sardines!”

There was no privacy at the camp. They were given tools to make their own beds and had to sleep next to their neighbors. Each family made their own dwelling area with the whole family sleeping in the same bed. “You are like a chicken in a barn!” said Lang.  “You just go around the area, but only inside the gate. You are not allowed to go outside the gate.”

After ten long months, they were finally sponsored. In the United States, the Lutheran churches were instrumental in sponsoring many Refugee families. Lang’s family had been selected to come to the United States! While the fourteen members of their family were together at the camp, they were all sponsored by different American families, and arrived in the US separately. Lang and her husband thought that they would never see her in-laws again, because no one knew where they were going to end up.

Leaving the Refugee camp and being separated from their family left Lang with mixed feelings. While she was happy to escape Communist rule, and grateful for the opportunity to come to the United States, she was worried about the language barrier. “I didn’t know English. I did not know the culture. It was like being a newborn baby. Like being born a second time,” she said.

The Lutheran church made an arrangement with Lang and Hung to advance the money for their family to fly from Malaysia to Bremerton, and the Huas would repay once they got on their feet. On October 2,1979, the Huas arrived in Bremerton, WA, and were taken to a home right next to Emmanuel Lutheran church. The house next door to the church used to be used by the pastor, but the church had decided to use the house to help Refugees. They could stay there for free for one year while they got on their feet, and the church came together to help them secure their needs. When Lang opened the door to her new home, she found the house fully furnished, the refrigerator and cupboards stocked with Vietnamese food, rice, bowls, even chopsticks!  She would never have guessed how welcoming people were. “I couldn’t imagine how loving, caring, and giving the people were to me and my family,” she said. The church would take turns sitting with the kids whenever they went to ESL classes, even giving them a ride to the classes. They helped Lang get her children registered at school.

Being new in America, Lang had no idea about various American customs. One of the women at the church, who was one of the people who helped Lang and her family get settled, was Judy Glenn. 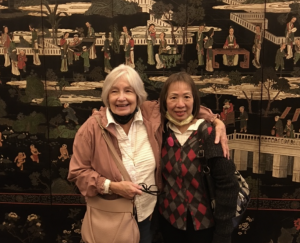 Like Lang, Judy was a mother, and they connected mother to mother. While at the Refugee camp, Lang had to have the baby first before she could travel, so here she was, in a new country with a new baby. Judy decided to throw Lang a baby shower. Judy even made a cake for her, which was overwhelming to Lang. “It was one of my first American experiences!” she said. Over time, Judy and Lang became close. Once the baby was sick with pneumonia, Judy stayed with Lang the entire time at the hospital, bonding through the experience. “What a terrible frightening experience for a mom,” said Judy. After that, Judy became “mom” to Lang, and “grandma” to the children, who call her “Moey” to this day. 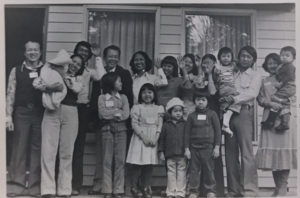 Being reunited with the entire family in Bremerton, WA, 1979

As Lang and Hung began to get settled, they found out that her in-laws were sponsored by another church in Washington, and were pleased to find out they were only 30 minutes away in a nearby town called Poulsbo. They were so happy to be reunited together. They thought they would never see each other again! It was a joyous reunion to see the entire family not only getting out of Vietnam, but reunited over 7,000 miles across the world.

Hung got a job as an auto mechanic and worked at Radio Shack, while Lang cleaned houses, and worked at a daycare while their children went to school. One day, her mother in-law saw an opportunity to buy an herbal store in San Jose, so she went and put a down payment of $200 and they moved to San Jose. Eventually, the Hua’s decided to move as well because they heard work was plentiful!

Today, Lang still resides in San Jose. All five of her children are successful and thriving, most of her children went to college, and her sons are all business owners. One of her daughters graduated from Santa Clara University, and is a graphics designer. Another daughter is married and retired from HP, to focus on her children. One of her sons owns two successful restaurants in San Francisco, one son is an Optometrist, and the other owns an Auto-body shop. Lang works as an admitting clerk for Radiology for 21 years, and is getting ready to retire. Lang says “My family were so blessed to get out safely and being sponsored by the Emanuel Lutheran church, with great love, we were helped by the wonderful people at the church. I will never forget all they’ve done for us, and I thank God for them. Thank you America!”

The interview and narrative were done by Christina P. Alo who is friends with one of Lang’s children and also a student at Foothill College in Los Altos Hills, CA.