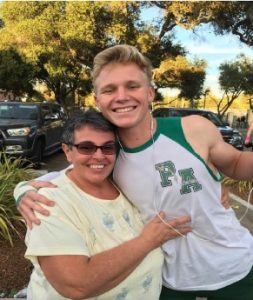 I needed my tonsils removed, but I was terrified of the doctor, Dr. Webb, which is why I brought my friend Maria with me. The thing that I was most scared of was the doctor, because I was unable to communicate and didn’t speak English. Everything had remained the same after I moved from Portugal forty six years ago, as an eager 17 year old, with my husband. As I waited in the little room, I reflected on the move and easing into every other aspect of life here.

Some of the traditions that stayed like the old parties we had in Portugal, festas. We still had those here in my new home here in Turlock, California. Many of my neighbors were even Portuguese immigrants, just like myself. We all carried the same sense of pride for our culture and heritage that we had when we were still in Portugal.

I certainly didn’t lose my faith, and attended mass at Our Lady of the Assumption Catholic Church near my home. My work life didn’t change. Every morning when it was still so dark you couldn’t see; I was forced to get out of my warm bed to start work on the farm. I put my boots on and went out to milk the cows. This was before all these new fangled inventions that can milk the cows on their own. Each year we would milk the cows and sell some while keeping the rest for ourselves. We also had to collect eggs from the chickens for our breakfast. Our farm was not a massive farm, but it was a good size. In addition to the cows and chickens, we had pigs and sheep, which we raised for slaughter. Even this didn’t change from my home in Portugal, where my father would butcher a pig for us to eat. I had lived off my animals in Portugal and I still did here. Farm life was very important to me back in my home town and will always be appreciated because of the impact it has had on
my life.

I had to adjust to the different and more modern lifestyle here in the US. At home in Portugal, laundry was an all day affair – my mother and my sisters would wake up and wash our laundry by hand and then hang it up to dry outside in the sun. If it was raining it was very difficult to do our laundry, so we would have to delay laundry days if it was the middle of the rainy season. Here, life got much easier. We bought a machine that could do the washing for me. All I had to do was put the laundry in, dump a few scoops of soap, push a few buttons, and let the machine do the work. However, I still dried the laundry on a line by hand, which was even better than in Azores because it was always hot in Turlock. I came to learn and accept the new machines while still maintaining some of my old habits.

Swimming has always been one of my biggest fears, I then decided to conquer this fear and learn how to swim. Always having a fear of water, at the age of 18, I cancelled every swim lesson I made for three years. I was always jealous of seeing my husband swim and being who I am, I hated not being the best in everything I did. After three years of being teased I finally started going to my swim lessons at the age of 21. I would sneak off from work every Wednesday and after mass on Sunday to go to my swim lessons. I was determined to learn this skill. I remember how, on my husband’s 33rd birthday (I was 22), I surprised him with a pool party and all the family came. I gave him some jeans and underwear for his birthday but the biggest present was yet to come; I got his attention when he was talking to his mom and hopped in the water. You should have seen the look on his face, he ran over to save me and jumped in the pool with all his clothes on. He was in shock that I learned how to swim but the best part was that I overcame my fear of water and that I was now one of the strongest swimmers in the family.

Having to go to the doctors was the most difficult thing for me until the age of 30. My biggest fear was needles and not knowing if I needed to get shots or not on the way to the doctor. In addition, I needed a translator – I couldn’t speak English because I didn’t have the time to learn and I was surrounded by people who spoke Portuguese. Not knowing any English, the only thing I ever needed help with was a translator at the doctor’s and that rattled me and was really one of the only reasons I learned the little English I know now. The first time I was ever going to get a shot, I passed out just looking at the needle. With all this stressful stuff happening at the doctor’s, I took into deep consideration to just stop going in and getting check-ups like my husband until I met my best friend Maria.

Maria looks like me, short, a little heavier set, with long brown hair. She has always been one of my closest friends who I can rely on. She was always honest with me and told me what was smart and what wasn’t. Having a great friend like her, I stopped having a translator and would force Maria to come with me and eventually overcame my fear of going to the doctors, which I never thought could happen.

Now, as a 64 year old mom, I have zero regrets. With all the help from my husband’s family making us feel comfortable in Turlock and showing us the ways, we had nothing to worry about which gave me the time I needed to overcome all my fears. I had overcame every fear I ever had including the doctors, needles, swimming and learning a new language and it may have taken 20 odd years but it was worth the struggle. Now I am currently learning how to ride a bike and never take anything for granted.

Moving to the US for most people is super difficult and for the most part didn’t work out, but was a different story for me and my husband. With all the perseverance me and my husband had to make make it work here in the US, the move really paid off. I am currently a mom of six daughters and two sons but most importantly a grandma to 40 beautiful grandchildren. I am now happily retired and can never repay everyone who has turned me into the person I am today and can truly say that moving to the US was hands down the best decision I ever made.

This story is based on an interview by Colin Giffen, a student from Palo Alto High School.