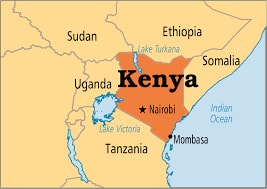 This is a map of Kenya and its surrounding countries.

I never knew God’s plan for me would’ve been this amazing until now that I look back and see all that I have accomplished through Him.

After three long months of boarding school, my seven siblings and I were surprised with the news from my dad that we were going to go visit our “[cucu] sho-sho”–grandma. Our grandma lived in “shags”–a conservative area in Kenya. The mud homes and the smell of “nyama choma and kachumbari” meat and tomato salad that my siblings and I smelled from her home made us excited to go eat and play in the farm all day with our family. As we roamed through “shags,” we would see children as young as 3 begging for food on the dirt soil, and busy people selling goods and materials throughout the streets of Nairobi. Years past and I graduated from Kenyatta University majoring in Literature and welcomed my new adopted sister, Munane, to the family. Since she was adopted into the family after a hard life of neglect from her mom, we had to teach her basic skills that she never had the opportunity to learn. Soon after, my siblings continued on with their lives in Kenya, but I didn’t really know what I wanted for my life.

One day, my friend Lidia told me she had a job for me at a bank in the Netherlands. I decided to book a ticket, and the day before I left, something in my heart, in my soul told me I should not go. I felt this was all too sudden. I was going to leave my mum and my family. I couldn’t do that. I talked to my mum and she told me I needed to leave, not to the Netherlands, but to America.

She had told me, “Wango [my Kikuyu tribal name], you are my third daughter, and you are ready.” From there, I decided to go. I took all my savings and all I could carry in my small black suitcase, and I left. I needed to go and figure out what I wanted for my future.

September 1997. I entered a plane for the first time in my whole life. As the plane gradually lifted off into the air, I reconsidered this decision but managed to push through. I would constantly repeat “Ninafunikwa na damu ya Yesu.” I am covered with the blood of Jesus.

After a long 15 hour flight, I landed in San Francisco, California. The sunny weather and fresh air was just like what I had read on magazines. My good friend, Mato, whom I grew up with, picked me up and kindly welcomed me into his home. The first night I ate something I would only see on American magazines and TV shows–pizza. After one bite, I surprisingly hated it! The stringy cheese reminded me of a time when I was younger when my dad told me to get sticks for a fire. In the pitch black night, I had not recognized that I had touched a huge slimy banana slug! After then, I always had a pet-peeve for slimy things.

After about a week in America, I needed to get a job and get my new life started. I got a job as a babysitter for a very wealthy and rich Iranian family. They were so kind and loving towards me and it was somewhat soothing to know I had people who I can relate with since they also came from a big cultural family. I soon became very interested in politics when I started to watch ABC news and CNN. Bush had become president and I remember how expensive things had gotten. I also then started to be interested in Kenya’s economic stability since I remembered how I would always see many low income people roaming around the streets. I learned that there was many riots and human right violations going on in Kenya once I left. I wanted to help, but I had to remember to be focused on setting a stable ground for myself.

Eventually, I began to apply for new jobs and started to go to Chabot Community College in Hayward. I met my husband,  now ex-husband, Kimani, who is the father of my two daughters. I had to stop going to community college because he would leave my 4 month old daughter, Shiru, at home by herself and would expect me to come out of class to take care of her.

After having my second daughter, Wairimu (named after my mum), I sent my 2 and 5 year old daughters to Kenya for a year so I could end my toxic relationship with their father. This was one of the hardest time of my life. I felt like a failure, but one thing I learned was to never depend on anyone but myself. I ended my relationship with my ex-husband and then I was able to bring my children back home. When I saw them I was so relieved and overwhelmed with love.

Now as a single mom, living in a one bedroom apartment, I would sleep on the floor so I could ensure that my two daughters had a bed to sleep on. One thing I always tell my daughters is to be strong as an independent person.

Eventually, I began applying for jobs in the Bay Area. There had been multiple times when I would apply for jobs and people would be confused with my race because by my last name, people would assume I was “Asian” and would be surprised when they saw me. From their eyes I would immediately know they wouldn’t take me seriously and I wouldn’t get the job. This really opened my eyes to “the real world” but I had no choice but to not let their rudeness affect me. Soon after, I was blessed with an office job as an executive assistant in Oakland, California that I worked at for 10 years.

Now, 20 years later, my eldest daughter is 18 years old and is on her way to a university in New York studying political studies, and my youngest is 15 years old and is in a college preparatory school. One thing I would always tell them is to work hard and do better than what I have done. I have my papers now and live in a beautiful home I am blessed with. I am very happy and fortunate. Two years ago was the first time after 18 years I went back to Kenya  to see my family. When I saw my siblings and new nieces all I could do was cry. Not from sadness, but from all that I had missed. Once mum died I felt a heavy burden on my chest and I had felt guilty for moving to America once she was sick. I have forgiven myself and will never forget her voice when she told me  I was ready to go to America. When my aunties and uncles would ask me how I did it all by myself, I would simply say, “Kwa imani katika Mungu.” By faith in God.

The story of Winnie Hiuhu was written and recorded by her daughter, Wairimu Kimani.