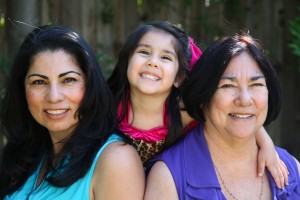 She worked two jobs to keep us fed, clothed and with a place to live . Sanjuanita worked in the fields in the morning and took the night shift at Hunt’s Wesson Foods a tomato canning company…”

Mom immigrated first to McAllen, Texas from Estación Aldamas Nuevo Leon, Mexico, where she worked as a maid. Due to poverty and your typical “machista” father, she and her older sister Matiana had to find a way to support the family.

In the United States our homes went from a garage, to a beat up trailer, to an apartment that we washed down with the hose where she caught an awful skin infection until we were able to buy an old home that we actually called our own.

After working in Texas, she came to Fresno, California to work in the fields where she met my father Cesar Magallon. Dad spoke English and had worked his way up to foreman. They migrated from the Fresno fields to the fields of Empire, CA where they lived at the migrant camp that still stands today. But the joy lasted little as my father died while drunk driving one April night. Although Cesar was a legal immigrant he was taken to jail and not to the hospital. He never made it out of surgery.

When dad died in 1972 she moved to Riverbank with me. She had only $10 and a third grade education from her country. A nice catholic couple from her hometown in México already owned a home in Riverbank and put it down as collateral so the bank would let mom borrow money to bury my dad. She worked two jobs to keep us fed, clothed and with a place to live . Sanjuanita worked in the fields in the morning and took the night shift at Hunt’s Wesson Foods a tomato canning company in the area. Through her hard work and dedication she managed to buy an old house on Texas Avenue in Riverbank.

Sanjuanita later remarried a man of her own hometown. When she became pregnant with her second child (Mariela) she made the decision to learn English and enrolled in adult education. Mom stopped adult education because the teacher made fun of her and said ” you should be ashamed you waited so long to come learn English”. That hurt her so much she quit. So I wonder if that educator had any cultural awareness at all? For after all she had done to keep her family afloat, always putting herself last, it was now she had the opportunity to do something for herself.

At this time we were still a migrant family but now we were traveling back and forth from Texas to California. In Texas we had managed to buy a prefabricated home in a lot better state then the one we had in California. We had no idea what a fire alarm was, we had never had one. I knew the sound of it, only because I attended school and was quite familiar with the fire drill process.

One night as mom was making dinner, she became distracted and burnt a tortilla on the “comal”. Immediately the fire alarm went off and mom started to run around the house with a face full of panic and screaming. I was shocked to see mom so scared and began to cry. I felt so much pain in my heart and huge desire to save her from her past. It was at that moment, I realized how much she had suffered due to poverty and ignorance. It astonished me to think that if a mere fire alarm had caused her that much fear, I could barely imagine the cruel and painful situations she must have lived in the past. It was then I knew she had not yet been made into America.

A lot has changed since those days; mom has now become a voting U.S. citizen. She owns her own home which is fully paid off and which she bought brand new. She even chose the colors and the floors. She is very close to paying off her brand new Nissan car. She retired from the tomato canning company and both her children are now professionals. I was a migrant until I graduated with my B.A. from UTPA in Edinburg, Texas. I never knew what it was like to be in one school all year until college. I thank mom for pushing education upon us and when I was awarded the Teacher of the Year in 2013, I handed over my award to the woman who made it possible. I hold an M.A. Degree and my younger sister has two B.A.’s. We both own our homes.

Although she doesn’t admit to it, she speaks a lot more English than she takes credit for. It is thanks to Sanjuanita’s pain, struggles and her fighting spirit to achieve a better life for her family that we are made into America.

This story is shared by Anna Maria Magallon.  She lives in Modesto, Ca with her husband and 5 year old daughter.