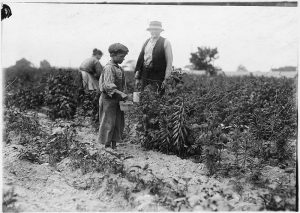 My family’s most recent immigration story occurred so long ago that, when interviewed, my mother had to recount the number of “greats” that came before grandfather. My great-great-great grandfather, Emanuelo Oliva, was born in Genoa, Italy, in 1840, and immigrated to the United States with his family, including his three brothers. The family eventually made their way across the country to California, where they were able to succeed and prosper as farmers. Through their journey, Emanuelo Oliva and his family proved that despite hardship and struggle, success and the achievement of the American Dream is possible for immigrants.

In ltaly during the mid 1800s, living conditions were far from ideal, especially for people working in agriculture. At the time, Italy was not yet unified and instead was made up of many independent city-states. This led to war and unrest throughout the country that damaged the economy, limiting opportunity for workers. As a result, Emanuelo Oliva’s parents made the decision that the United States was the best chance for a successful future for the family.

Emanuelo was just a teenager at the time of the immigration, and my mother recounts that it was likely devastating to him at the time, as he had to leave many loved ones behind. Also, due to his young age, Emanuelo probably did not completely understand why he and his family decided to move, adding to the doubt and hopelessness he felt. However, the majority of his family accompanied him on the journey, so he had love and support throughout the journey.

In the United States, the family moved almost immediately from the East Coast to the West Coast, which my mother speculates is because they had a decent amount of money. “If you had money as an immigrant, you moved to the West Coast,” so the family was pretty well off financially as far as most immigrants go. Specifically, the family lived in Santa Rosa and in parts of the East Bay, which at the time were great locations for farming and agriculture.

Emanuelo did not attend school, and instead helped provide for the family as a farm worker. The family worked for a company called “Del Monte Foods,” which was a very profitable growing and distributing company. The company was Italian-owned, which was likely how the Oliva’s were able to get jobs working there. Eventually the company became very successful, and as a result, the Oliva family made enough money to buy their own land, which was almost unheard of at the time for immigrant farm workers.

Unlike most immigration stories, my mother recounts that as far as major hardships and struggles go, “the Oliva’s never had any significant problems or limitations, and were very fortunate in how things played out for them.” The only possible limitation in their achievement of the American Dream was the ethnic segregation they experienced, due to the family staying within their Italian ethnic group for the most part.

However, in the end, this actually seemed to help them, as it provided them with a job and a support system. This ethnic segregation persisted for generations up until my grandmother, as before her, her ancestors all married only other Italian Roman Catholics, even while living in San Francisco. The success and wealth of the family also persisted for generations, eventually leading to opportunities for higher education that have contributed significantly to the success of my grandmother and my mother.

Of course I am very grateful that the family moved to the United States and to California, but more importantly I feel incredibly fortunate that they were able to have financial success and permanently settle here, because without their success, who knows where I would be living today.

This story was written by the immigrant’s great-great-great grandson, a student in Palo Alto.