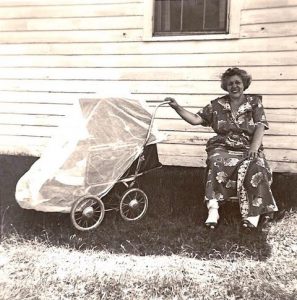 Lena Solomon, née Hurwitz, was Russian and Jewish, and was born in 1902 in the Russian city of Pskov. Although age was rarely discussed and remained mysterious within their family, it is speculated that she must have been the third youngest sister of eight sisters who survived through infancy. Various circumstances led to the eventual immigration of Lena and her family to America. For starters, the persecution of Jewish people in Russia was common, particularly through the practice of pogroms, which were violent riots intended to massacre the Jewish people. Furthermore, the father of the family had just died, leaving Lena’s mother to care for 8 girls on her own.

It was under this context that Lena’s family went to America. Already in New York City was a cousin, and a lot of available work for seamstresses for the sisters, who were proficient in sewing. First, Lena’s elder sisters went off, and then she and her younger siblings came later with her mother to America by boat. The family went through Ellis Island in 1910, commonplace at the time for many new immigrants to America. Currently, Solomon’s extended family has their family members’ names engraved at the now-iconic Ellis Island. At the time of entry, the family found that they could not communicate their birthdays, as they used a Jewish calendar. Consequently, Lena was assigned a birthday in March at random by the regulations at Ellis. The family moved into Washington Heights, a Manhattan neighborhood, after the immigration process.

Lena’s education once she came to America was very limited. She attended two years of schooling, learned to read and write in English, but then promptly went to work in sweatshops at around the age of 11. Although this may sound far too young to work to us, it was the norm at the time. After all, Lena came from a large family of immigrant women trying to survive in America, and this meant everybody had to chip in and do their part to provide. She later got married to an immigrant from Warsaw, Samuel Solomon, and from then on continued working domestic jobs like being a maid or a cook.

The tough labor she had to do was not the end of the hardship Julie’s grandmother would experience in America, however. America at the time was overtly anti-Semitic, putting quotas on the numbers of Jewish people allowed in many institutions, both public and private. Along with other minorities, Jewish people were often not allowed into certain schools, or allowed to apply for certain internships after finishing higher-level education. In retelling this story, Julie recalled her own great-uncle, a Jewish musician, being called into upscale restaurants and bars to perform, with the inherent irony being that Jewish people were not allowed to be patrons of those very same locations.

Still, for immigrants to America, there was an prevalent feeling that they not only were, but had to be part of the American culture despite the discrimination they often faced at the hands of American society. Julie told me at the very beginning of our interview that many details of the story of her grandmother’s immigration would be fuzzy. She remembered that in January of this year, she visited her 91 year old aunt, and asked about her grandparents to find out more. When she didn’t get very many detailed answers, Julie quickly realized that much of her family didn’t talk about those experiences.

She said she believed this to be in part due to the trauma caused by the amounts of suffering that immigrants, like her grandparents, had gone through before and during the migration process. Her sense was that a lot of the Ashkenazi Jewish people from Eastern Europe who had migrated to America came to really feel American, and would not talk about the lives they had lived prior. The focus of the families was that now, they were in a new place, and would adapt to their new environments. Especially in the case of Julie’s grandmother, given the pogroms in Russia and her father’s death shadowing that part of her early life, it simply became evident that the family had to leave. Sometimes it was easier to treat life in America as their true life rather than to dwell on the hardship that had caused immigrants to leave their own country.

Julie Solomon finds that there is a lot to learn from her grandparents’ experience, especially when looked at in the context of today’s America and our contemporary debate on immigration. To Julie, when the Trump administration began the assault on immigrants, particularly those of Latinx or Arab heritage, it promoted xenophobia. Most evidently and possibly most detrimentally, it riled up the people who already had those beliefs, and allowed them to be proudly open about their discrimination. Julie found she could relate to it, in the sense that it brought back what could have been the experience of her own grandparents.

She said that in today’s era, she was fully aware that she walks around with privilege because she is perceived as a White person. But in the early 1900s, Jewish people were not afforded the luxury of being counted as ‘white.’ They were treated as outsiders, and inferior to the people, mostly WASPs, who then were considered to be ‘real’ Americans. When her grandmother Lena arrived in New York City in 1911, she looked the same way that Julie does now, but experienced something entirely different.

She recognized America’s complicated history with immigration as a successive wave of the government and society determining which people from which countries would be ‘other.’ Through her grandparents’ experience when they arrived, she was reminded of the experience of many other people today who are going through something similar. Through Julie’s family’s story and others like it, we can learn about the recurring cycles of xenophobia that have occurred, and maybe learn a lesson and work to prevent it.

Julie Solomon is a member of the Mountain View Human Relations Commission (HRC). The Human Relations Commission focuses on numerous socio-political issues that concern the community. Our current social hemisphere is laden with discussion about the rights of immigrants and how we handle xenophobia in contemporary American society. Xenophobia is no new phenomenon, however, and Julie was able to draw comparisons between the occurrences of today with the experience of her immigrant grandmother, Lena Solomon, in the early 1900s.

Julie was interviewed by Roo Joshi, a Junior at Mountain View High School.