Education is the Bridge to US (Turkey) 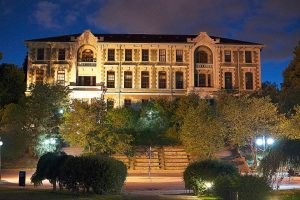 While growing up in Turkey, the obvious pressing issue concerning Haluk Konuk was that he was not born into a socioeconomically well-off family. He always had to move around with his mother and older sister to live with various other family members in Istanbul. Basic necessities were hard to come by as he even recalled that “eating meat was like a feast”.

Nevertheless, Haluk still had the opportunity of having a childhood. Every summer, he would go to his grandparents village 100 miles away to play soccer with the other village kids, ride around on a bicycle, play make-believe games with friends, shoot a bow and arrow, learn more about Turkish and Abkhazian history and culture with his grandparents, and overall live out a pleasant childhood. In other instances, his older cousins would take him to amusement parks or his uncle would drive him around in his truck. His fondest memories were always from living with his uncles or grandparents.

Most notably, he had an uncle who would always call young Haluk, “Haluk Abi” which directly translates to “big brother Haluk” as a show of love and respect. This one simple instance is the embodiment of Haluk’s childhood as the manifestation of goodwill displayed by his nearest family members was the foundation for what Haluk was built upon. They were always there to inspire him to be respectful, energetic, spirituous, humble, and motivated.

Ever since he was young, Haluk knew he wanted to become an engineer. At 7 years old, while moving into a new apartment due to his family’s ongoing financial struggles, he heard about one of his many neighbors talking about how their oldest son had become a mechanical engineer. When Haluk heard about the job, and more notably how much money the son made, he was set that it would become his career.

Once he had his sights set on mechanical engineering, Haluk focused everything into his academics to ensure that he could achieve his dream. He placed into one of the best middle schools in Istanbul, won national exams, applied to the undergraduate program at Boğaziçi University, the most prestigious college in the country, and got in; it was truly an incredible milestone pushed forward by the passion of himself and his family. While mechanical engineering ended up being boring, Haluk came across the relatively new inventions of the time such as mainframe computers, videotapes, and recorders. He was so impressed by these products that it compelled him to transfer into electrical engineering after his first year of college.

Haluk was able to successfully graduate from the best college in Turkey under electrical engineering, but he still wanted more. He noticed that all of his peers at college were in a much more economically stable lifestyle, and most students wanted to pursue graduate programs in America. Since Boğaziçi was the first international American college, it offered the students there exclusive connections with America that could not be found anywhere else in Turkey. It was here that Haluk was able to learn English and gain more opportunities to further pursue his education. Haluk was impassioned on furthering his education to be a part of what he regarded as the forefront of the world’s innovation, but he could not stomach the idea of leaving his family behind. In the end, the culture of the college and the encouragement from his family ultimately pushed Haluk into immigrating to the United States of America. Thanks to the Fulbright Act, he was offered scholarships to many top American colleges and decided to attend Case Western University in Cleveland, Ohio. Within a week, Haluk was on an airplane towards his future – the US.

Leaving Turkey was very tough. Haluk saw his mother as “the embodiment of love and affection”. In fact, Haluk said that “The most traumatic event in…[his] life was leaving…[his] mother”. Although his family had set him up to become the successful student that he was at the time, he now would now have to let go of their immediate support.

As it turned out, Cleveland turned out to be a “run-down” and unpleasant city to live in. To Haluk, the whole experience there felt cheerless and depressing. Despite the gloominess of it all, he managed to push through and obtain a master’s degree. His professors took note of how much effort Haluk had put into his master’s thesis, and they gave him opportunities to attend the best schools in the nation to obtain a Doctoral Degree. Haluk ended up getting a Ph.D. from UC Santa Cruz which in turn allowed him to enter into the workforce and finally become financially stable.

With everything considered, Haluk managed to obtain his dream of becoming financially stable, but it definitely wasn’t without many sacrifices. He lost ten years with his family. Every time he spoke to Americans about Turkey, he would be saddened that many American-born individuals had seen more of Turkey than he had.

Nonetheless, Haluk had gained so much from his entire experience. His gratefulness for the socio-economic milestones living in America cannot be understated; he gained a wonderful family including two kids who he puts everything into. Furthermore, he also was able to grow closer with his sister after the passing of his mother as he began to really see her more as a mother figure. Through all the hardships and sacrifices Haluk was put through, his family was the ones who set him up to push through it all and achieve his childhood dreams.

This story was written by Evren Konuk, the son of Haluk and a student at Palo Alto High School.