Dumplings and Music Can Overcome Differences 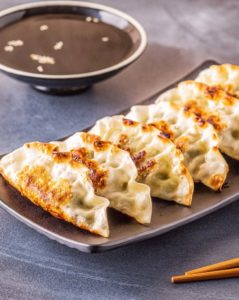 Linda Yan was born in Beijing, China and immigrated to the United States at the age fourteen as an international student. Initially, she planned on completing her education in the U.S. and going back to her homeland. However, she stayed in the U. S. to pursue higher education at Stanford University and is now a graduate student.

She explains that while living in Beijing, although there was government censorship, her family still felt safe to talk about politics and to criticize their government, but many communities living in the U. S. may not be comfortable to ask for government aid. Yang is passionate about technology being used ethically to help immigrant communities and in the criminal justice system, including immigrant detention.

She is also passionate about music– she considers music as a common language that can be used to connect and communicate with others from all over the world. When she first arrived in the U.S., she used music and theater as a way to make friends. Yang’s first arrival to the U.S was in Connecticut where she attended a private boarding school. She began to recognize the prevailing racism and classism in her school.

Throughout her schooling she observed that Asian people were forcefully grouped into an Asian American identity even though Asian people who did not grow up here have very different experiences. She was challenged to break away from many stereotypes of Asian people that often made her feel reduced or tokenized. This caused a struggle and differences in how she saw herself versus how others perceived her. Over time, she became unaccepting of her culture and invalidated her own lived experiences.

Yang’s transition from Connecticut to  Santa Clara County played a significant role in becoming unapologetically herself. As a college student Linda became involved in the Santa Clara County governmental internship, non-profit organizations, collaboratives, and community outreach spaces that focus on human rights. As she spent more time in the county, she began to feel safe and comfortable to embrace her identity because of the large Asian population and their influence. She found ways of keeping her traditions and culture alive. This centers around food like Dumplings and Hotpot. Yang hosts dumplings parties with her friends and family; an assembly line is formed where people fill, fold, and pinch the dumplings, learning how to make them into delicious samples.

During the COVID-19 pandemic lockdown Yang lived with her parents and experienced both a time of hardship and a time of healing. She engaged in difficult conversations with her parents caused by cultural and generational differences in views and values. With spending more time together as a family, she was able to create a closer relationship with her parents and this became a healing experience. Her family also experienced financial stress. Her parents own a business in China that supports her grandparents, who decided to stay in China. Throughout the pandemic their business struggled to stay afloat due to tariffs, cost of production, and people no longer buying products. Her grandfather experienced two strokes and she could not go see him due to COVID-19.

Linda Yang strongly believes in the value of giving back to the community and helping those who have helped us, especially the elderly members of the community. She also highly values humility, justice, and listening to everyone in the community while also knowing our own boundaries.

The interview and narrative were done by Guadalupe Vazquez Mendoza.