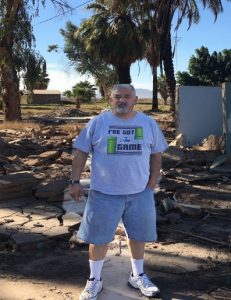 People call me “El Canoso” but my name is Carlos (changed for anonymity). I was named after my father for having so much white hair, but oddly enough my beard and mustache was very dark. Every morning at 5 AM I wake up “regando” everything in my “Ranchito” with my father. We also feed the chickens, check our chile, and we throw rocks at a date palm tree to eat as a snack every morning while my mother cooked breakfast. It was almost a ritual.

My mother always had high energy in the morning, but for some reason, I did not feel it. Later that same day she was pronounced dead. I don’t know how, I don’t know why still till this day. When my mother died my father fell apart. My father always had shiny black hair but this time it transformed like a before and after picture. Most of the impact was taken on my dad because I did not understand what was going on at first because I was only 4. But I then realized I was being fed real food most of the time. It was great but I was so used to drinking out of my moms “Chichi”, which means breast in English, that I knew something was wrong.

Seeing my Father struggle as much as I saw him was devastating and frustrating for me. My parents always used to talk about the opportunities there are in California, and that one day we would all move there together. Now that my mother was resting in paradise that wasn’t ever spoken about. 4 years later, I come home from school one day, and I remember my stomach roaring ridiculously loud. I was looking forward to “burritos de frijol” that my father always makes. But this time I came home to my father crying on his knees saying he was sorry, and that he loved me. I was very confused and I started crying with him. I asked him what was wrong, and he said he was sorry he couldn’t provide food for me today.

At this point in the back of my mind, I told myself I’m going to America, period. I sit down with my father and I tell him, ” Apa, no me importa lo Que pienses, Pero voy a América para ayudarnos.” My father starting to tear up again but I can tell he tried to hide it. Then my father said, “Estoy muy orgulloso de ti hijo”.

On March 2, 1974, I was put inside a semi truck that was also packed with other immigrant people and families. It was called a “coyote” back then. The ride was about 5 hours long. It was hot, humid, quiet and stinky. Crossing the border was much easier than I thought but at the same time, it was scary. I had a lot of family in California, but I just didn’t know where except for my uncle that lives in San Jose. I saved his number inside a sandwich bag just in case. I remember asking an old man wearing a dark black suit where San Jose was, and he said, “that way”. He wasn’t much help but he then asked me in Spanish, “Y tus papas?” I couldn’t trust him since I just met him and just shrugged my shoulders. “Bueno, si necesitas un paseo, me dirijo a San Francisco para una reunión si quieres acompañarme.” Next thing I know, I’m tagging along with a complete stranger which I forgot to ask what his name was.

I slept the whole way to San Jose and when we arrived, I was left in front of a liquor store just before sunrise. There was a public telephone that I used to call my uncle. I had to ask a woman to dial the number because I couldn’t reach yet. I explained to my uncle where I was, and it turns out his house was a few streets away. My uncle was very welcoming. He gave me a place to sleep, food, water, a TV, and a job. I worked throwing newspapers. I remember making little money but it was enough to send to my father.

A couple of years later I quit being a newspaper boy and now I was a professional painter. On an errand to get bread for our homemade “posole” that my uncle makes, I run into my dream crush that I had when I was little. I knew it was her because she had the same scar we got together when we jumped off a bridge. It now looks like a hickey. That same day we went on a date. It felt so unreal to find my crush who immigrated from the same “rancho” to be here in the same city as me.

After our first “date” I found out she came here for the same reason as I did. When I took her home, we both knew we liked each other. About 6 years later I asked her to marry me. My best friend who worked at the same paint shop as I did, left to work at this highly paid school district which sounded way to good to be true. Turns out it was true. He did me the biggest favor of my life and said he talked to his “jefe” to give me a shot at an interview. I took the opportunity as a solution to help my father more. And I got the job. Starting salary at $25 an hour was life-changing. 5 years later, $30 an hour. Another 5 years later, $35 an hour, and now 16 years of life working there I am grateful to make over $100,000 a year.

My parents’ dream of coming to the U.S never came true, but for me to start from nothing to helping my father for life without any worries is just something that I would only dream about every day. This goes to show that the U.S is the land of opportunities.

This story was written by a student in Palo Alto, after interviewing his father.