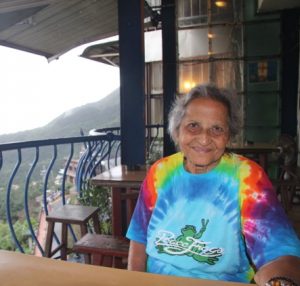 Amrutha was born in a small village in Karnataka state in South India.  She was the fifth of seven siblings.  While growing up she always admired the local doctor, and long story short, became a physician, the first in her family to attend college.  She married, and had a son named Ravi Chandra.

Amrutha and Ravi immigrated to the US, where Amrutha completed training as a physician. 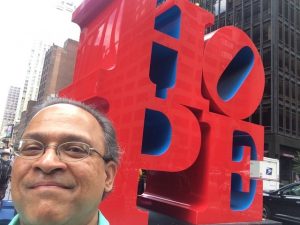 Ravi behind the famous “HOPE” sculpture in New York City

Amrutha and Ravi initially lived in Tuskegee, Alabama, a predominantly black populated city. Amrutha had to redo some of her training and exams to be licensed in America.  During her rotating residency, they moved around to different places from Tuskegee to Nashville to St Louis where she finally completed her residency.

Dr. Amrutha faced some discrimination for being a foreign medical school graduate. The biggest challenges were being a single mother , as well as being looked down upon for being a woman of color with an accent. Through it all, Dr. Amrutha had a lot of support from key mentors and family friends that helped her take care of Ravi when she was on call.

While Ravi was in kindergarden he remembers a white boy pointed at his skin and told him he was dirty. When Ravi got home that evening he tried scrubbing off the “dirt” from his arm using Ajax.  When he told his mom, she simply said “oh, that won’t go.”  He says it was hard to understand his identity as an Indian American. 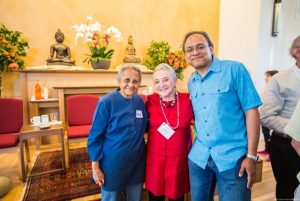 During the fifth grade, when they were in St.Louis, one of his teachers had Ravi take a couple of tests and he was able to attend a gifted school. He went to public schools until the 10th  grade, when his mother transferred him to a boarding school to avoid his being uprooted again when she moved back to the South for work.  This school, in Michigan, really expanded his appreciation for the arts and sciences.

All his life, he only knew Black and White people, and didn’t know where he fit in. However, that all changed when he attended Brown University. He finally had a connection to his identity as an Asian American and person of color.
Later, he attended Stanford University Medical School where he continued his political and social involvement, being involved with issues of racism and sexism on campus.
This interview was conducted by Maria Vazquez and then Ravi edited his family story.