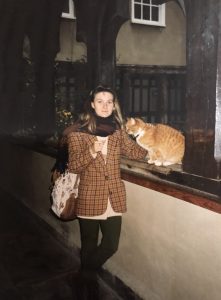 “Life was fine if you didn’t know about anything else” was my mother’s response when asked about life in her hometown. My mother, Monica Rosso Tabrizi, was an only child, born and raised in Italy by my grandmother and grandfather. She lived an average middle-class life in Italy: she went to school, graduated, and went on to college at Universita degli Studi di Udine where she got her degree in English language and literature and completed her dissertation.

Her first move came at age 25 when she moved to Germany to work as an au pair. The first move lasted about a year, after which she moved back home for another 6 months where she worked for a company as a salesperson for german speaking customers. Her second move to Germany lasted longer for about 3 years. During this time she worked for an importer and distributor of Italian products in the central European position of Cologne, Germany. This location allowed her the flexibility to travel much more easily within the Schengen Area, where participating countries did not require passports or other forms of border control along their mutual borders, and she was able help the company develop foreign marketing networking.

Her prior knowledge of the German language from school and the proximity between her hometown and Germany made so that she felt virtually no culture shock from her move. However, she described that “There was a glass between foreigners and natives.” This feeling of separation, though not very acute in her first move away from home to Germany, would become increasingly prominent with her future move to America.

Moving forward, during the time in which my mom worked for this marketing company she had the opportunity to travel to many different countries and meet new people, including my dad. Once she met my dad working for this company they hit it off and kept in touch thereafter, however, my dad lived in the United States (CA) while my mom still lived in Germany. Moving forward, she would periodically visit him. First starting off by visiting for a week and then going back home. After that a couple of months went by and my mom and dad decided that they would try living together in California.

Having her first move within a continent and territory that she was familiar with was a much easier transition than her move to America. The culture shock was far more substantial, although she first thought that “it would be much easier because I knew the language and I was with my husband.” The differences that she experienced came in layers- the different communities from the diversity in American society, becoming familiar with the cultural tensions that existed, etc. Coming from Europe, my mother had little to no experience with many of the new ethnicities that she encountered, “I didn’t have the concept of race that there is here.” She also was fascinated to see that “everything was brought down to english”, that “this language is the unifying factor when there are so many different cultural layers.”

However, it was these layers that created the diversity and lack of as much sexism as she had previously had to endure when she lived in Italy. This enabled her to pursue more individualized goals in a more liberated environment, it gave her “a better chance of being my own person.” This freedom to achieve led to several personal milestones, most of which also gave her better insight into American society and helped her combat the culture shock that she originally felt. These milestones include getting married, receiving two masters degrees, and becoming a mother, all of which educated her on the American opinions and policies that surround these crucial topics from motherhood to marriage to academia.

Being an immigrant, my mom is able to see the country through a different lens than most others, and the policies and perspectives that natives may often overlook and take for granted are more easily noticeable to her. Being an immigrant “allow[s] me to think about what it means to be on the ‘other side’”, and, especially now when the topic of immigration is scrutinized more than ever before, it is important to appreciate the significance of outside perspectives and meaning that immigrants bring to this country.

This story of Monica Rosso Tabrizi, is written by her daughter, Ariana Tabrizi, a students at Palo Alto High School.