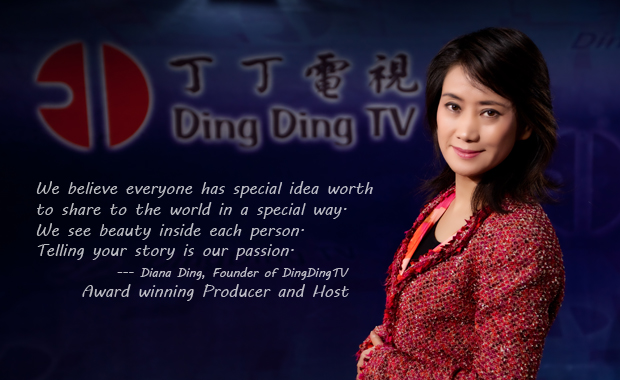 Ding Ding TV’s office complex is graced with photos. In all, Ding Ding TV founder and entrepreneur Diana Ding stands tall among other entrepreneurs and television guests, including Basho Technologies Chairman Chester Davenport, Congressman Mike Honda, Milpitas Mayor Jose Esteves. A letter from President Obama praising her work adorns the wall. Another photo set showing Diana’s evolution over the years hangs from the opposing wall. Inside the production room, an employee gazes intently at a screen and calls for Diana to turn up her microphone. Move in a little further, and you’ll find the stage set, on which Diana sits preparing her notes for the upcoming interview.

Ding Ding TV, an internet TV company, was founded only three years by Diana, but since then, its viewership has grown to over 200 million worldwide. It is the first and only livestream internet television station in the Bay Area, and Diana serves as CEO, host, and producer.

Diana Ding was first exposed to American culture as a child living in Guandong, China. A Colorado elder named Daryl visited the country every year and would teach English to Chinese residents. It was on one of these trips that Diana first met Daryl. “He was always surrounded by a lot of people,” she said. “But he found time to pray for me and sent me Bible materials for almost seven or eight years.” The kindness she found in him would later play a central role to her character and endurance in America. 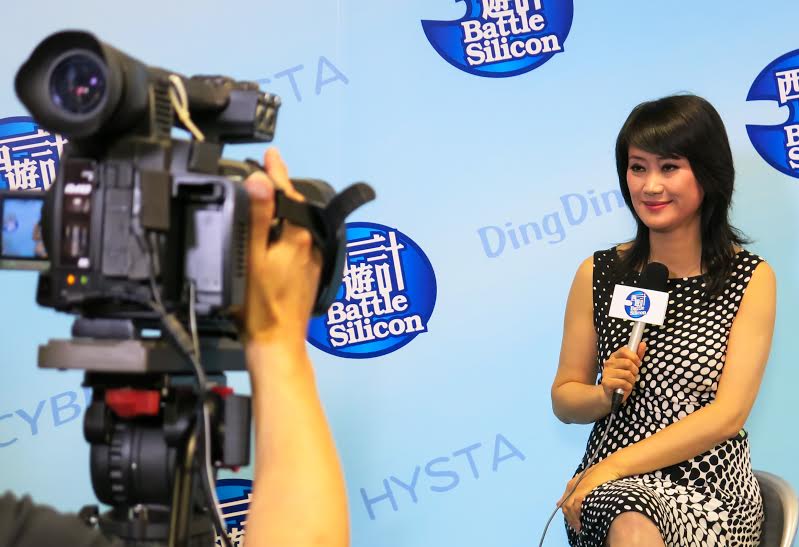 Diana grew up in a loving household with three other sisters. Her father was a professor while her mother was an engineer. After graduating from college, she sought work at a high-tech semiconductor in the management department.

In 1997, Diana was introduced to a group of Christians who took care of her after she was injured from an accident that forced her to stay immobilized for six months. Reminded of Daryl’s faith and moved by their compassion, she soon pursued her own relationship with God. Through God, she took the leap and decided to leave her home country for America. “Because I believed in God, I was willing to take risks,” she said. “If you are the kind of person who’s willing to sacrifice yourself and willing to take risks, you’ll find a position.”

In 2001, Diana immigrated into the United States. Shortly after, she purchased a club in Alameda and decided to open a fitness gym with her husband. “I would get up at 4 am to get there at 6,” she said. “We wanted to support the community, so we sent gift certificates inviting people to the club.” Even though people ignored them at first, eventually they started trickling in. One day, while trying to set up internet services in the gym, Diana became acquainted with the discrimination common in America. An AT&T serviceman arrived on the scene but soon began to argue with her about the position of the hardware. He sneered, “You don’t know anything,” but Diana, knowing the building better than he, continued to insist. Finally, he appeased, but not before throwing a derogatory slur in her face.

“Nobody knew it happened,” she said. “It was hurtful, but I became stronger because of it.” Diana became even more determined in her spirit of entrepreneurship, and in the end, her work paid off. The gym grew to hold more than 300 members. “It was unbelievable,” she said. “Everyone was warm-hearted; it just goes to show what you can do when you don’t give up.” 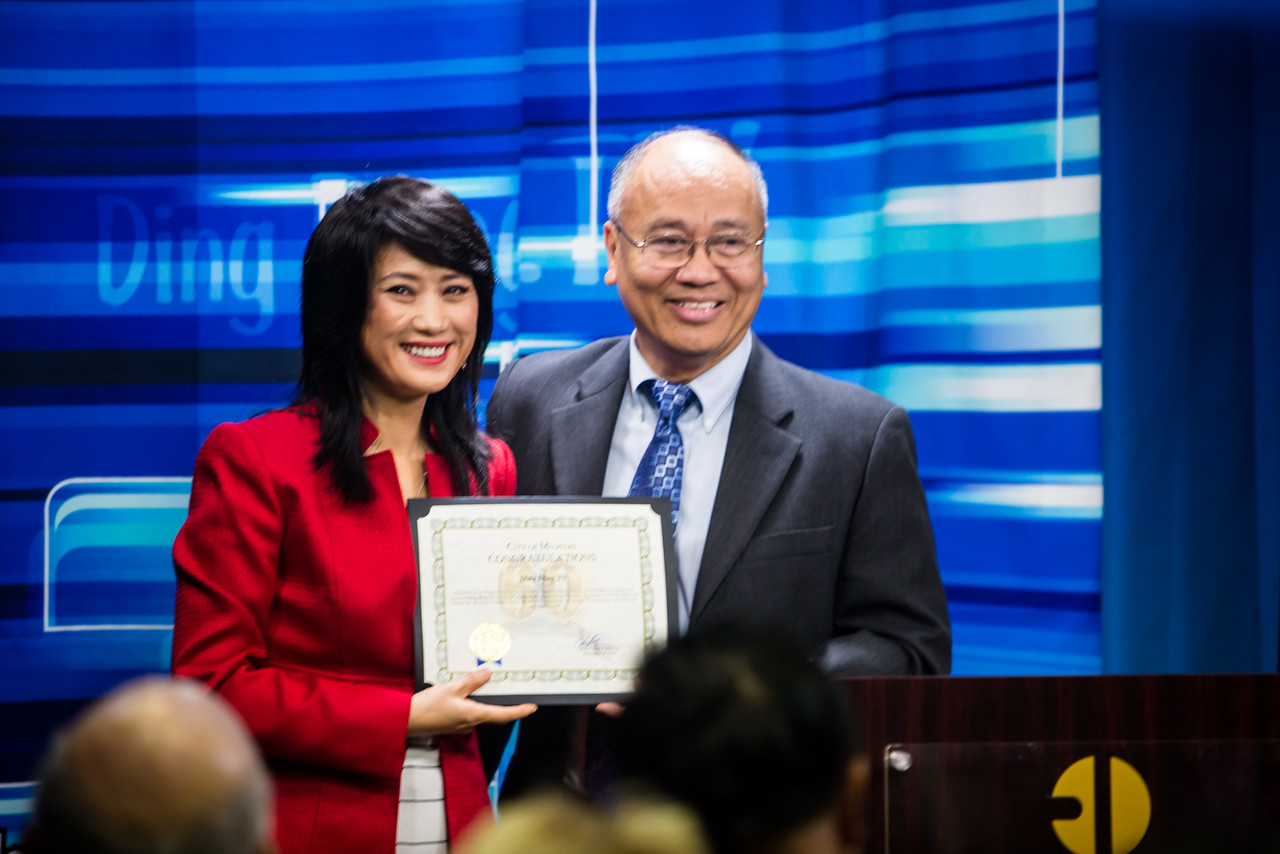 After starting out in industrial tech, Diana moved into the marketing department at a local TV station. It was at this TV station in 2009 that she had an epiphany about the future of television. “The internet was going to be the future of TV,” she said. “We could watch TV on the internet in real-time, and livestream tech could be a tool for phone conferences and interviews.” Though her employer did not agree with her, she was confident that she could make something of it. It was her trust in the Christian God that spurred her to leave her job and begin working on what would become her startup TV station.

It wasn’t easy. “No one believed in me,” she said. “I failed more than 100 times in the beginning, and I cried almost every week, but I kept going.” Diana started her station at home; her garage lights created the atmosphere for her home media, and she was the cameraman, editor, host, and producer. “It was a one-person company,” she said. “But I believed really strongly in this, and so I kept trying.” Every day, she searched on the internet in order to learn code and build her own website, and she often worked through the night into the next morning.

“I’m a very sensitive and blindly optimistic person,” Diana said. “I don’t see the difficulties; I just keep going.” Her endurance became the defining characteristic of Ding Ding TV, and after acquiring a few more employees, the internet TV station took off and became a platform for joint Chinese-U.S. business interests. Diana began to host more and more celebrity entrepreneurs and innovators, and soon Ding Ding TV was receiving awards and recognition for its work in connecting businesses across language, cultural, and ethnic barriers. Show segments such as “Innovation Dialog” and “Battle Silicon Valley” attracted more and more attention, and the Silicon Valley innovation channel known as Ding Ding TV rose to prominence both in China and America. 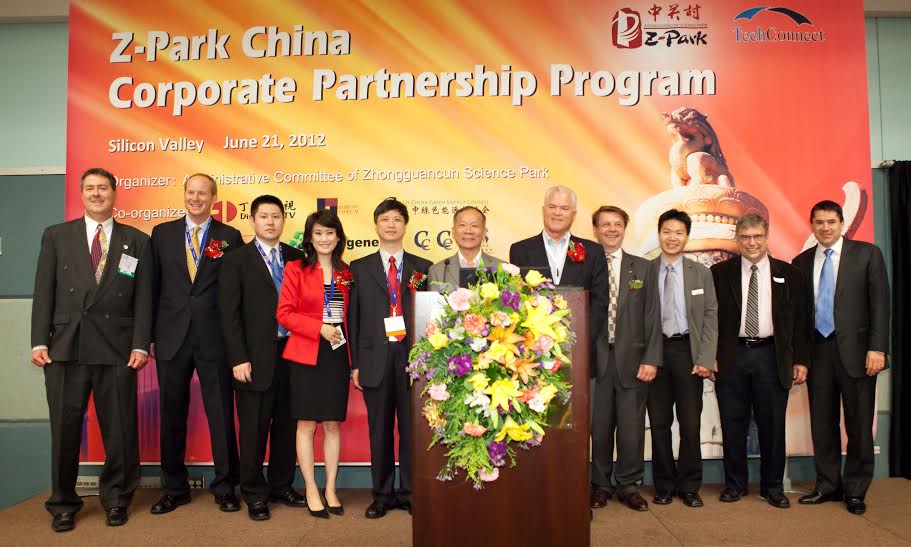 Today, Diana credits her family and religion for her determination and perseverance. “My grandmother had wanted a son, so when my mother was born, she treated life as a man,” Diana said. “She set an example because she was always the strongest.” Diana further points to God for all the good that has happened in her life. “I was so much happier after I became Christian,” she said. “God really blessed us.”

In the Sunnyvale office complex, the telephone rings. An employee calls for Diana to pick up the phone, and she does, saying softly, “This is Diana Ding.” Her eyes widen as she listens to the speaker on the other line. It is a company worker contacting every person on their list of America’s top female CEOs. “No, no, I’m sorry I can’t accept that honor,” she said. “We’ve still got a lot to do and a long way to go.”

She heads for the soundstage, dressed in a classy maroon dress and black heels. The production crew adjusts her mic, aims the stage lights, and tests the scene. “You’re on in 3!”

Silence comes over the room. Diana straightens her notes, looks into the camera, breathes once, and smiles. “Welcome to Ding Ding TV, this is Diana Ding.”