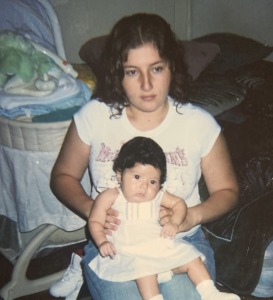 Rosalinda Cabrera (name changed), my mother who is 34 years old, immigrated from Michoacan, Mexico to Santa Rosa as a child. She later immigrated back to Mexico and immigrated to Los Angeles in 2005 when she was 17 years-old where she later moved to the Bay Area. For over 10 years, she has been committed to working in an Assisting Living Facility. In her free time, she spends time with her 2 daughters and friends.

Rosalinda was born in Apatzingan, Michoacan where she lived on a ranch within a poor community. Her father was a boatman where he carried passengers and her mother would wash clothes for their neighbors in return for money, food or any other resources. When there were no meals, her mother would make tortillas with salt for her, including her older sister and brother. Seeing the same problems everyday, her father decided to leave to the U.S. to earn money to be able to bring the rest of the family after.  He wasn’t there for too long and Rosalinda was only one and a half years old when she and her mom and siblings crossed the border to the United States to be with her father. According to her mother, Rosalinda and her siblings were holding on to her clothes tightly, terrified of getting lost in the hills. The journey lasted for 3 days. They arrived in Santa Rosa, where her father had a home for them. Her parents had a 4th child there. They lived there for about 8 years until they had to leave the U.S suddenly due to the I.C.E visits around them but her father stayed.

They didn’t have a stable home at first in Mexico, they stayed at her grandmother’s place until her mom could buy a house. When bought, her mother was able to open up a market that sold beverages, chicharrones, tortas, a little of everything. After a year, her father came back from the U.S since the family was “financially stable,” but he started to waste the money earned from the business, resulting in her mom having to shut down the market. With months of having no money, constant arguments, her mother decided to try to go back to the U.S. Rosalinda was 15 by then, only her and her older brother were going to go with their mother. Her older sister was already married and her younger brother was not an immigrant, which would be easy to go by plane. On their 3rd day of walking, they were caught by border patrol where she was separated by her brother and mother in the Detention Center. They were there for 3 or 4 days, in the cold place with no food given.

“I remember that they would yell at us constantly,” recalled Rosalinda. “They would yell the same things every time, ‘You don’t belong here! We don’t want you here! Why do you keep coming here?!’”

When they were deported back to Mexico, it didn’t take long for her mother to make the next plan. But with a small amount of money, she ended up having to choose between Rosalinda or her older son to pass the border using fake papers. At the end, her mother chose her brother instead of her.

“I felt horrible that my mom left me. As a woman I thought that she would pick me and not my brother, but she chose him because as a man, he would be able to work and take care of her,” she said.

Rosalinda had to stay with her father and younger brother, her mother would send them money for food and clothes but it wasn’t enough  so she decided to quit school to start working. Her father wasn’t much of a help either, became depressed, an alcoholic and had no motivation to work. Her younger brother was able to go to the U.S not too long after the others did, she wondered when she would be picked. On lonely days, she would visit her older sister who lived close by. After months of waiting, Rosalinda started to believe that it would take years or forever to be able to go to the United States.

Rosalinda worked in multiple jobs, a shoe place, markets, clothing stores, restaurants where she later met Alberto, the future father of her first daughter, she was 17 at the time.

“To be honest, we didn’t go out for a long time or learn a lot about him,” she said. “I don’t think it was love, I saw him as a way out and an opportunity.”

He promised Rosalinda that if they got together, he would take her to the U.S with her mother. Seeing how nothing was changing with her father, she decided to leave home. But before leaving her home town completely, she found out she was pregnant.

“At that point, it wasn’t just for me or to see my family. It was for a better life for my baby,” she said.

Rosalinda was 5 months pregnant when she crossed the border. The supposed 2 or 3 hours of walking, turned into 3 days. It was a group of 30 people together, the hills were rocky, it was cold and everyone ran out of water. They had to drink water from dirty puddles and others would wash their dry lips and faces. On the second day, Rosalinda started getting exhausted, she fell twice, she couldn’t walk anymore and at one point she wanted to give up. It was in the middle of the night, on the floor tired, telling Alberto that she preferred staying there until border control found her. 2 other men encouraged her to keep going and helped her walk along the way. The truck that picks up the people that are passing illegally, led by “el coyote” later came to pick them up. It was chaotic, a full car of tired people that were piled up on each other. “El coyote” insisted that Rosalinda should be on top since she was pregnant but others didn’t care, all they wanted was the journey to be over. They were only on it for a few hours before they had to get off since there was border patrol spotted ahead. They got on the truck again and got off again to be able to cross the freeway where there was another truck waiting for them on the other side. There were 8 lanes in total, everyone ran quickly and once Rosalinda crossed she fell on her stomach. It was painful, her body was sore, it was dirty, full of bruises, her clothes were all ripped but that didn’t matter. The journey was finally over. She arrived in Los Angeles at 5 in the morning.

On their first day, Rosalinda arrived at Alberto’s fathers place. She ate, bought clothes and went to the clinic. When she went to the clinic, the nurses asked multiple questions right away because of her appearance. They believed Rosalinda suffered from domestic violence but she didn’t want to say anything about her journey. She thought she would be deported back if she told the truth, but the nurses said that they wouldn’t share any of that information. Her baby was fine and healthy. Her first days in the U.S were not difficult, she didn’t struggle with English since she learned it when she was younger but it did take some time to remember some of it. She wasn’t allowed to work because of her partner. In April, 2006, her first daughter was born. After 2 years, problems began between her and Alberto’s relationship. He didn’t let her work, he quit his job, they only depended on his father and their relationship was disappearing.

Suddenly he got a job that he was dedicated to, he was a plumber working with his brother. But it didn’t take Rosalinda much time to realize what he was actually doing. After a few months, he was arrested for the possession and sale of drugs. Rosalinda didn’t know his exact location, it took 3 months for him to finally contact her. She hesitated going to visit him for a few weeks but her little girl would constantly ask for him so she decided to go. It was hard seeing him, her girl was 4 years old now, she would cry because she wasn’t able to hold him. She visited him for 4 months until she stopped taking her girl since it was too hard for her. Constant visits and days with a lawyer until Alberto decided to sign the order of deportation. She and her daughter never saw him again.

Since Rosalinda was not allowed to work, she was left with no money. The savings were wasted on a lawyer and other necessities. She was later kicked out of her house by her sister in law since they weren’t family anymore. Her father in law helped her for a while, she found a job and was financially stable for a while until she lost it. As Rosalinda saw how she didn’t have her desired life in Los Angeles, she decided to move to the Bay Area to join her mother and brothers.

Her little girl was turning 5 years old when they arrived in the Bay Area. It wasn’t hard since she didn’t start with nothing there, she had her mother that helped her. She was able to find a job, where she later met a very close friend. In 2011 she found a stable job in an Assisting Living Facility, this year will be her 10th year working there. In 2013, she had a 2nd daughter, 8 years younger than her first.

“Here, I can try to give my daughters a better future. I don’t want them to depend on anyone for their entire lives like me. I want them to meet people, go to places and never say ‘I can’t do it.’ I wouldn’t change them for anything,” Rosalinda said.

The interview and the narrative were done by Rosalinda’s daughter.