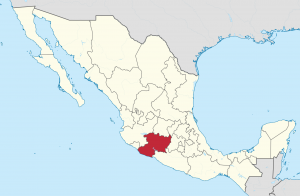 In 1994, everything went downhill for me in Mexico. I wasn’t getting enough money to provide for my family. If it wasn’t for the money, I would still be in Michoacan. My two friends and I decided to leave El Sauz De Magaña Michoacan the Rancho, where I was raised to come to the United States.

The jobs in Mexico did not pay well, and the plants that we planted did not sell for a lot of money. I wanted to provide my family with more money for a better future. And to do so, I had to cross the border to realize el sueno americano (the dream of an American). To come to the United States, I had to borrow money from close family, and I also had to sell and kill some of my cows. I know that if I had stayed in Mexico, I would have been broke and probably would have owed a lot of money, because it was hard to provide for my family.

I left behind my wife, my son, and my daughter, who was on the way. It took us 30 days to get to the United States. We took a bus to California. We got stopped by la migra a few times, but we wouldn’t give up. My mind was set on providing my family with money and a better future. When we got to California, it wasn’t what I expected. Everybody that had left the Rancho to come to the United States would describe America differently to us, that America was prettier and better.

I wasn’t satisfied with the jobs I was offered in California, so I got on a plane with my friends and came to Washington. My friends said that they had family here in Washington, and that they would help us find a job. When I first got to Washington, I lived with six other guys in West Seattle. We all paid one hundred dollars in rent each month and one hundred dollars for food. I was working at a Plant Nursery with a low wage. A few months passed and that was when I met my boss. He asked my friends and I if we wanted to work for him in his Landscaping Company. I worked for a few months under my boss, but it was hard to communicate at first. Yet, we managed to understand each other. I mentioned I wanted to bring my familia de Mexico (bring my family from Mexico). In October of 1995, I saved enough money and borrowed some from my boss to bring my family from Mexico. It took my wife and two kids a week to arrive in Washington. I had enough money to bring them with a coyote (a person who guides them).

I am still working in the same Landscaping Company, under the same boss. It has been 22 years since I left my Rancho and have been working in the United States. I am glad I left because I was able to provide my kids Miguel Jr, Elisa, and Kimberly with a good education and good jobs. Mis tres hijos an ido a (my three kids have gone to) Tyee High School. I would have not been able to afford education for my kids in Mexico. Although, sometimes I miss Mexico because I have family there. I hope that one day I can go back.

The story of Miguel was written after an interview by his daughter, Kimberly, a high school student.