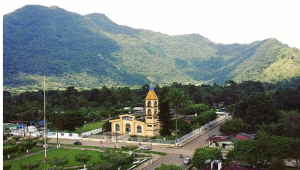 The local Zapoapan church where Beto would go to as a kid.

My father Beto Gustavo (name changed), was born in Orizaba, Mexico and raised in Zapoapan Veracruz, Mexico. Currently when writing this, he is 47 years old. He decided to immigrate to the United States from his birth place. He works as a handyman, having a wide range of skills. He enjoys playing soccer from time to time, while also teaching how to play instruments as a hobby. He currently lives in California, after moving from state to state. I chose this person because I’ve only previously heard snippets of his journey to the US, they weren’t detailed either, so I wanted to grasp more knowledge of his voyage.

Raised in the small town of Zapoapan, Veracruz, in a family of 7 brothers and sisters, Beto was the youngest of the brothers. With so many mouths to feed, the family struggled with payments. Though times were difficult, he would often spend time having fun. He’d go for a swim in a nearby river, construct canoes out of the stems of a banana tree, fly kites, play soccer, the list goes on. At the age of 12, Beto was taken out of school in the 6th grade to work in the fields with his father, having no education was really difficult for him. Up to the age of 16, he’d been working  in the field, planting coffee beans, sugar cane, and various other crops. At the age of 17, his father’s friends offered him a position to become a chauffeur. He had no experience driving cars, buses no less, yet he was able to become a pro in a short amount of time. As he was working in the chauffeur business, he found himself a girlfriend. She already had a daughter at the time but he didn’t mind that, he felt as if he was in cloud 9.

Beto worked as a chauffeur until the age of 24, where one of his friends introduced him to a recruit looking for people to come to Alabama and work for them. They would be provided with a work visa. That’s when he decided to move to the U.S. with a work visa for a better future. While preparing for the long journey ahead, he asked his girlfriend if she would like to join him on his trip to the U.S. Obviously she refused outright, she didn’t even know he had planned to go, it was out of nowhere. On Thursday, October 14, 1998, at 9 am Beto set out on his journey to the U.S. His family felt sad at the thought of their son leaving them, however none of them rejected the idea and wished him good luck. He hopped on a bus from the same line of work and traveled all the way to the border. Throughout the ride, Beto felt so many emotions. He felt sad for leaving his family but felt excited at the thought of exploring new places he had never been before. Throughout his journey, he kept in touch with his girlfriend, reporting everything he’d been through. Once at the border of Texas, the patrol checked the luggage of everyone on board, and threw away all the food. On Sunday, October 17, 1998, at 5 pm, he arrived at Eufaula, Alabama from El Pazo, Texas. Once in Alabama, he started to work at the company that wanted him to plant trees and harvest them to make paper, wood, etc. He worked from October 20, 1998 to February 20, 1999. The work was vigorous, so he tried to find a better place to work at. That’s when he decided to move to California to look for jobs there, and to be with his older brother. He crossed Mississippi and Louisiana in a van, it took him a whole day to reach Houston, Texas. As he entered the Airport, he found himself lost within the labyrinth of gates. Luckily for him, a lady who worked there helped Beto in finding his gate. There he finally boarded his first plane ride. He was in awe the whole trip there, seeing the magnificent puffy clouds, the shiny stars at night, and the thought that he was so high up made his heart race, in a good way.

Once he reached the San Jose Airport, Beto was finally able to meet with his brother whom he’d not seen in over a year. His older brother took him to his place to meet up with his friends. He also introduced him to his workplace so that Beto could also find work. He started working in an agency named Labor Ready in March, 1999. At the agency, he primarily worked in construction. Throughout his stay in California, he had various jobs, from a gardener, to cleaning cars in the SF airport, then as a plumber, going back to a gardener, then a carpenter, then remodeling apartments, later making basements, and going back to become a carpenter again. During his free time, he would teach how to play the guitar with his friends as a hobby. His little hobby turned into a side gig, seeing as he was rented for weddings, quinceñeras, mass, and to generally teach. As he was balancing work and his side gig, he found time to go back to school, which he hasn’t been for 10 years, to learn English. In the school, Sequoia Adult School located in Redwood city, from 6-9 pm, he would go to class and try his best to learn the foreign language of this new country he was in. It was challenging trying to balance all 3 things, plus learn a whole new language from scrap, but he managed to pull it off.

After months of planning, Beto’s girlfriend and step-daughter arrived in the U.S. with help of the Coyotes. He picked them up from Los Angeles and took them back to where he lived.

In the year 2006, his eldest son was born at 12:07 am. He was exhilarated, having created a new life. He was on the verge of tears out of happiness. My father’s top priority was to work hard to provide for his family.  When raising his son, every moment filled him with nothing but happiness. He was like a dog taking care of his newborn pup.

Everything was going well until a fateful day, during one of his carpenter jobs, he horribly injured his back. It felt as though someone had stabbed him with a metal rod to his back, the pain felt as if it lasted a lifetime. He worried he wouldn’t be able to pay rent, provide food for his family, and all the necessary needs in a home. Though with his back injured, he had friends who were faithful to him, providing food and money to him even though he couldn’t work. He’s still friends with them to this day.

During his recovery, he decided to go to Cañada College at the age of 36 to further study English. He didn’t need to pay a dime seeing as he had a scholarship to go there. He felt scared to go to college seeing as everyone there was speaking in English, so he felt as if he was an outsider, alone. Though in the year 2009, something exciting happened to him. The youngest child of this family was born. He was again in awe with this new creature that is his son. He kept going to college until the year 2011, where he finally was able to go back to work, so he dropped out of college.

During that same year, he decided to go back to Mexico to visit his father. He’d recently started to become sick, and not eat as much, so Beto felt worried that his time would soon be up. He took his eldest son with him to visit his father. We were there for 2 months ‘till it was time for me to go back home. However, Beto couldn’t go back with me seeing as his work visa expired a long time ago. On the 15th of August, Beto decided to go back to California by any means necessary. He first attempted to cross the border using fake papers. He was caught and taken to jail where he would spend 12 hours in.

His second attempt was to cross the border through the desert. It took 8 days to cross the desert, the journey was a perilous one, he ran out of food and water, the temperature was extremely high. It was so hot that he could no longer advance through and had to rest in the bushes near him. At night it was even more dangerous, it was still as hot like during the day, but it was pitch black outside. He couldn’t see much so he would often bump into cacti on his way through the desert. He would end up having over 300 thorns throughout his legs. His shoes were torn apart, his feet ached with huge bumps all over them. He finally reached Arizona, where he traveled in a Mustang all the way to California, it was around a 12 hour trip. He finally arrived home.

Right now, my father is at a stable point in his life. He went back to work in construction, but still does his side gig from time to time. Though he doesn’t have a luxurious life, he is living a more comfortable economic life. He still wishes he could’ve brought his family with him, that is what he misses most about his original residence. He appreciates having a home to return to, a family to spend time with, and being financially stable. Beto would like to return to his original residence, he wants to visit the family he left behind seeing as it has been 11 years since he last saw them face to face.

He believes that he’s adjusted to his new residence here, both in culture and language, seeing as he’s been here for more than half his life. He knows more states here than in his original residence. He had high expectations when regarding the U.S. He heard commentary that life over the border was much more different than in Mexico. There was a lot more money. He believed that once he was over there, his life would continue to go uphill from there.

Now after living in the U.S., all his expectations were quite the opposite. He’s grateful for taking the chance to immigrate to the U.S., if he hadn’t he would still be working as a chauffeur or a truck driver since he had family working in those same departments who wanted to take him in. His life would have been complicated with many dangers, he wouldn’t be able to go back home.

This interview and narrative were done by “Beto’s” son, a student in the Bay Area.