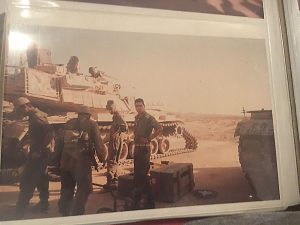 Ilan Hart during his IDF service in Israel

I was waiting for the security check back in Israel, clutching my Israeli passport that says, Ilan Hart. As the security guard looks at me, and then my passport, and then back at me, he asks if I was in Shirion (the tank corps in the Israeli Defense Force), and I tell him yes.

“I remember you Ilan, you were in my training class. I couldn’t forget a man with your build.” He says.

I exchange words with him and move on. After that checkpoint, we headed toward our gate. The airport was packed with people, all of them speaking Hebrew, and the feeling of being home struck me. I couldn’t believe I was moving to the U.S.

“How long is the flight?” My youngest daughter, Hadas, asked, as she was looking around, fascinated at all the people with pure curiosity. She is so young, how is she going to survive in America, not knowing anything?
“Around 12 hours for the first flight” I answer right away. My other children, Omer and Neta, learned some English in school, but what if that isn’t enough. My wife looked at me, she can’t see me worried, she needs to know I’m confident and that this is the right decision.

As we are waiting at the gate, I looked at our tickets to double check, I look at the gate screen and confirmed, it is Tuesday, and today will be our last day in Israel for a long while.

“Gate 24, time to board,” the announcer said. Immediately, everyone got up and started cutting the lines, pushing, and doing everything they can to get to the plane. I, on the other hand, was hesitant. This is it I thought to myself as I walked slowly, dragging my feet down the Jetway.

“This is so fun!” My son said, running enthusiastically between passengers to get to the plane. My wife, worried he will get lost, runs after them. I was even more scared, with every step I brought my family closer and closer to a new life, that might not even be better for them. But no, with one swift move I shake that thought away, the less I think of it, the less my family will see how scared I am. They can’t see me like this, they need me to be confident. They need to know they are safe and that I am here for them.

The flight went by really fast, without knowing it we land in New York and quickly rush to the second gate, to get on a flight to San Francisco. As we walked outside, I realized that there was no turning back, this is our new home now. My children won’t go to an Israeli school, they won’t enlist in the IDF, but most significantly, they won’t be around their family.

I walked out of the airport, breathing the air outside the San Francisco International airport. I was shivering, but it wasn’t cold. I stopped for a moment, taking everything in. I turned to my family and confidently told them to follow me. They couldn’t see my nervousness. It was a regular Wednesday for many commuters, but not for us.

We quickly hurried on a taxi and gave the taxi driver our address, our new address for our new home. In a new country. With every passing minute, the realization that we are here, and not back home hit me harder and harder. The drive was long and the kids were looking out with excitement. I was also excited for once. This is the land of opportunity. My kids were going to get a great education, go to college, make new friends. I thought to myself, this might not be so bad after all. For the first time in a while, I was genuinely happy. I didn’t have to mask my fear and show confidence, I was confident.

When we first got to our new home, our furniture was already there, as we sent it earlier. I was really happy when I saw the kids running around, finally having a backyard. Now that we didn’t live in an apartment, there was more room. Something was off though. The house didn’t smell like home, the TV sounded different, the mood felt different. This new house didn’t feel… like home.

We weren’t completely alone though, we did have some friends living in the area, so we went to visit them. It was still weird driving in a new country, the roads feel empty and quiet without the constant honking and people cutting. It felt peaceful yet disturbed. When we arrived the kids went on and played, while we stayed and talked. Throughout the whole conversation, I had to fake that I was settled in, to not show any worries about this new place. Once again, I had to appear confident to be there for my family. I was certain they were scared of what to come, so I needed to be there for them.

It was Friday night. Shabbat dinner. The most special day of the week. A day where we celebrate rest and God’s completion of Earth. This day is the single day in the week every single person anticipates in Israel. People drive to their families, sit around a table and eat dinner as a whole family, sharing how the week was, and being around each other. Almost like Thanksgiving in America, except that it happens every week. This day is special in Israel, and nonetheless, special to us today.

Yet, I was worried about tonight. This would be the first Shabbat dinner without the grandparents, the aunts and uncles, from the young and crying cousins to the more mature cousins. This was just us, my wife, my children and I. The room was full of light from the candles and full with people. But it felt empty. It felt as if it was missing something. I am sure my family was sad, but I had to show I wasn’t. I had to show I was confident. I had to let them know that they know they’re going to be alright and that I will make sure of that. I couldn’t let them see I was scared. And with that in my mind, we started a new life, in a new country. And I started the prayer,
“Yom hashishi, ve’yachulu ha’shamaim…”

This story written by Omer Hart, is based on an interview with Ilan Hart. Ilan immigrated from Israel to the US with his family in 2011 because of his occupation at Intel.