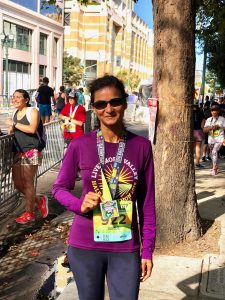 My mother, Vinaya Kavathekar, grew up in Pune, India. Unlike my own experience growing up in America, her culture and the traditional values of India were instilled into almost every part of her daily life. Yet, she had surprisingly little attachment to them. Vinaya always resented the way she saw women treated where she came from, despising the way she saw countless intelligent women relegated to a lifetime of picking up after their husbands and children.

Luckily for her, her parents wanted her to grow up to be educated and independent. She went to the Maharashtra Institute of Technology to study computer science. It was one of the few private schools in the country that even offered the course at the time, and my mom ended up graduating top of her class.

Later, Vinaya ended up at an Indian company called Godrej and Boyce. There was a running joke at the company that it should really be called ‘Godrej and Boys’, since it was predominantly men who worked there. Vinaya and a few other young women were the first women to be hired, and the company didn’t even have women’s restrooms. Despite the challenges it posed, the job was satisfying for a while. But soon enough, my mom decided she wanted to go further with her career.

Taking a gamble, she applied to a company that was sending people to work in America as temporary workers on an H1B visa. My mom figured it would be a good chance to take, since so many of her friends were already immigrating to America for greater opportunity, and the market for people in computer science was good at the time. They accepted her, and she went off to Massachusetts.
When I asked my mother if, as a teenager, she had ever thought she would leave India, she said no. It wasn’t that she knew for certain she would stay in the country her whole life, but that it had never really crossed her mind to leave. Similarly, when she first left for the United States, she didn’t really have a plan either to stay or to leave. She just wanted to see how it was.
And still, within 3 months, she had made up her mind. My mom knew she wanted to stay in America.

Most striking to her was the independence. Girls in India had it a lot different than what my mom saw in America. In India, there was very little independence for women, especially financially. They were expected to be the emotional forces behind the family, be responsible for the family and for friends, and they had to assume the role of ‘Housemaker’ much more than they had to in America. In India, women had to prioritize their families over their careers. My mother had never seen herself as someone who would have been able to fit that mold.

Even the story of her leaving for America was a significant one. My mother left of her own accord for her own dreams, while already being engaged to my father. It was my dad who would later follow her to America and continue his schooling there, and this disrupted a common pattern of the women in the family following after the men. From the start, my mom had made it clear that cultural conventions wouldn’t stop her.

This personality followed her into her graduate schooling. All while working full-time at a company called Digital Equipment Corporation in Shrewsbury, Massachusetts, my mom attended graduate school in segments from 1996-2003. First, it was a computer science degree at Worcester Polytechnic Institute that she got to further her career. While still significant, what I actually found most compelling about my mother’s story was her decision to try for her next degree: A Masters in English.

Boston University, where she was trying to get this degree, was put off by my mother at first. They told her she couldn’t actually take any of the classes at the school, since she hadn’t taken any other English classes in America. In fact, she hadn’t even taken the appropriate credits in India. As a result of this, she was only given permission to audit the classes at the school, not take them. This meant she could sit in on the classes and learn from them, but any assignments she did wouldn’t be graded, so she effectively wasn’t taking the class for any sort of credit.

Still, my mother did the assignments to learn from them. She would turn in some assignments, along with her midterm essay, despite knowing the professor wasn’t required to grade it. Still, lucky for my mother, her professor looked at it. A few months into her education, her professor told her she believed she was qualified enough to take the class as a real student, and that she could sign up and he would vouch for her. And so it went.

My mother graduated from Boston University at the top of her class. Her thesis was about Irish poetry, neither American nor Indian, just something she was passionate enough about to dedicate hours to. Which says a lot about her. My mom now lives in California and works as an engineer, which had always been her career goal. She has one kid who she loves dearly, and she always said one kid was enough. When I asked her what she wanted future generations to learn from her life, she had a few thoughts. 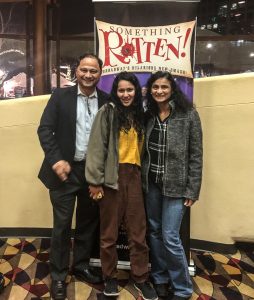 The first was that she believed immigrants needed to force their kids to be bilingual from the jump, being able to read and write in their Native languages. She and my dad raised me in English and Marathi, and although I could never read or write, even with the declining rate of use over time, I still understand my language. In a similar vein, she would ask them to have their children be more involved with any family they had back home. “That’s the only way to ensure that the old culture is carried forward,” she says. My mom, despite her frequent desires to escape India’s value, still wants to keep her family tied close to what she knew.
My mother says that immigrants should trust that the values that their experiences will instill in them are universal. She discourages people from second-guessing themselves just because they’re in a foreign land. 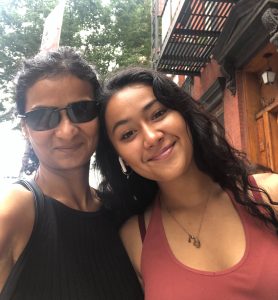 The author and her mother

My mom’s story has always fascinated me because of its complexity and the determination that shone through all of it. Although not unique to her, her story is telling of many aspects of the immigrant experience that she and countless others have lived and are still learning from.

Vinaya was interviewed by her daughter, Roo, a student at Mountain View High School in California.