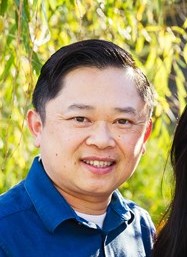 Don Long came to the United States as a refugee from Vietnam when he was a child. In reflecting on his journey prior to coming to this country, he talks about images from a refugee camp that was very crowded  with over 30,000 individuals in a limited space that restricted their freedom.

Although he was very young during this period of his life, he recalls the camp being very unhygienic, the food being very unpleasant, and the sound of the rain hitting the camp. His family, like several others, endured this hardship as part of their efforts to flee the war in Vietnam, eventually immigrating to the United States.

Once in the U.S., Long started school here in Santa Clara County. His family faced overcrowded housing at first, but over the years they overcame this situation by saving enough money to purchase their own home. Soon they began to rent out rooms and make the garage into a living space in order to also rent it out. This allowed them to pay off their home and to enhance their financial literacy.

Despite the obstacles he faced with discrimination and adjustment, Long succeeded academically and continued his education in Southern California at the University of California Riverside where he completed his bachelor’s degree in Psychology and Ethnic Studies. Long continued his education back in the Bay Area, earning a Master’s degree in Business Administration at San Francisco State University. Shortly after, he pursued another Master’s degree, this time in Social Work at San José State University. This kind of comprehensive education prepared him for a variety of  professions, and he began his career in Santa Clara County in 2001.

Later, he became a children’s counselor, analyst for the Office of Cultural Competency, and he currently works in social services as a program manager.  Don Long has achieved much throughout his 40 years of living in Santa Clara County, and he believes that it is important to give back to the people who work behind the scenes. He has volunteered to work on emergency response teams, volunteered in the PTA at his children’s school, remained involved in his homeowners’ association, served as a board member of several non-profit organizations and is very involved in civic service overall.

Long has worked in public service for over 20 years, focusing on child counseling, policy and data analysis, culturally proficient services, language access, racial and ethnic disparities, and equity work, along with office and program management. He works efficiently with diverse community members and is dedicated to breaking institutional barriers, while striving for equal access and human rights protections.

Among his many talents and skills, Long is trilingual in Vietnamese, Mandarin and English, skilled in photography, and adept at technical support. His coworkers describe him as being analytical, a great communicator, and skilled facilitator. He is also appreciated for his writing skills and his expertise in data and policy analysis.

Grounded in honesty and humility, Long’s 10-year plan includes aspirations of running for a city council seat after retirement and he is committed to continuing to engage in social justice efforts to remain a voice for those whose voices are rarely heard. He emphasizes the importance of giving back and shares, “As an immigrant, I am a beneficiary of a lot of people behind the scenes that I might not be aware of, right, that’s been there to help, and a lot of what I’m doing, I’m giving back. I benefit from those invisible hands that helped.”

His passion is powerful and his commitment to community and advocacy inspires the best in others. Long leads by example, encouraging others to work from a space of humility, living by the following guiding wisdom: know yourself, be honest with yourself, be humble.

Karla Venegas García, is a soon to be San Jose State University Undergrad obtaining a bachelor’s degree in Sociology with a minor in Human Rights. Currently she has been working with the Office of Immigrant Relations as a fellow.