Community Organizer with Roots in Portugal 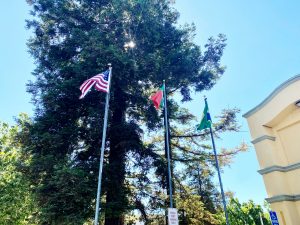 Carlos Da Silva is a humble man who is proud of the work he and his family have done here in Santa Clara County, including actively supporting and contributing to the Portuguese community. As a nine-year-old child, Carlos came to the U.S. from Portugal with his parents in the 1950s.

In Portugal, Carlos’s family owned land, a family home, and a farm. Even so, life was not easy. To add to the struggles, the Capelinhos volcano had recently erupted in his homeland of the Azore islands in Portugal. Shortly after, his family immigrated to the U.S. through a family unification petition under his uncle’s sponsorship. Within the U.S., there were additional difficulties as they initially did not have much. His parents had to rent their living space as they started working in the dairy industry. Fortunately, they were embraced by the local community, and a unified community made their life easier.

Carlos also reflected on the strength of unity between the Hispanic and Portuguese immigrants in helping each other succeed. The collective power eased their struggles and Carlos saw tangible improvements in his family over the years, such as succeeding in homeownership. Language barriers were another challenge for Carlos as there were no bilingual Portuguese/English instructional programs to support him in his studies. Over the years, he improved his English and professional skills through conversation by talking to his friends consistently.

Formerly, he was an employee of International Paper and Georgia-Pacific from which he retired due to a work-related disability and ongoing back pain. Like his parents, he invested a lot of hard labor over the span of thirty-five years. He held multiple positions, including being a supervisor to other workers and serving as president of labor organizations.

Currently, Carlos volunteers at the Portuguese Organization for Social Services and Opportunities (POSSO), based in San Jose. The Portuguese community often comes together to help each other as they celebrate their culture and organize volunteer drives. Carlos has also worked within the community through neighborhood associations, such as the Roosevelt Neighborhood Association helping with redevelopment and cleaning different neighborhoods, and he remains a member of Evergreen Community Action Team. He has developed unique leadership skills, supporting other community members from behind the scenes to become leaders. He plans to continue sharing his rich life experiences and knowledge with his community.

Carlos hopes people know that there have always been challenges when people arrive to the U.S. Many arrive with misinformation about the lifestyle here and are not aware of the immigrant stereotypes, such as the belief that immigrants take jobs from others. Immigrants do the work that others do not accept because they must work hard to survive. He emphasized that immigrants and others who are not paid a living wage could not afford to stay in the Bay Area and risk becoming homeless. Some affordable housing projects might improve the situation, but they cannot fundamentally solve the problem, he added. Carlos believes change can occur if politicians and communities start working with each other and calls for a “unification of politicians to work towards the same goals, instead of creating a divide in the nation.” His story, raw and authentic, is one of family determination, connection, community care, and the power of volunteerism. It inspires hope.

The interview and narrative were done by Enrique Rojas Sanchez.