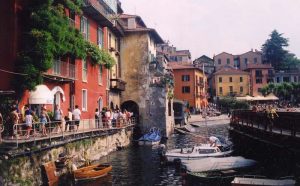 This story is based on an interview and the real experiences of Diana Modica, who immigrated to Johnson City, Tennessee for her father’s job after living all around France and Italy for 17 years.

The woman next to me kept knitting her blue-green sweater as I sat there in turmoil. The repetitive sound of her needles clacking grounded me as the plane did the opposite, roaring down the runway and into the air. We were leaving all I’d known for years to live somewhere I’d barely even visited.

I looked to my parents across the cramped aisle, watching them nonchalantly page through magazines and books. My little brother, only 10, sat a row behind, already fast asleep over his tray table.

I wouldn’t say my life had been a cakewalk until this point; moving constantly had kept me unable to form deep, trusting friendships that I knew girls my age should have. That said, living all around Italy and France for the first 17 years of my life was an experience I hope I’m always grateful for.

But I’d never been to Tennessee. I didn’t know what the people there would be like. My hands grew clammy as I clasped them in my lap. The thought of having to readjust yet again, to an unfamiliar school, an unfamiliar town, even a partially unfamiliar language, wound thick coils of dread deep in my stomach. I ran a hand through my brown hair, always cut short and practical. Weighed down by unease, I shut my eyes to sleep.

“Moh-dee-caw, Die-ayn-a?” I lifted my head, at first not recognizing my name in the school counselor’s Tennessee accent. Still jet lagged, I dragged myself the short distance from the beige waiting chairs to the blue office door. The counselor gave me a curt smile and backed into the door to let me through.

“So,” she drawled. “You’re the foreigner?” The little room was silent except for the hum of the fluorescent lights as she regarded me over her half-moon glasses.

Her expression didn’t change as she watched me a moment more, then shuffled some papers on her desk. “Well, here’s some registration papers, have your parents sign these, you’ll need to pick two electives, and that’s all about that. I’ll walk you to your homeroom.”

As we traversed the halls I peered into the narrow windows of the classrooms. I could make out girls and boys wearing bright colors and big jackets—a far cry from the more sophisticated and subdued tones of what the kids wore at my last school. Although it shouldn’t matter much; I never really did wear what the other kids were wearing.

The counselor stopped at a door marked Rm 105. “Class has already started, but your teacher will catch you up. Good luck.” With that, she marched back to the front office.

I swallowed, blinked, steeled myself, and, ever cautiously, pulled open the door. I was met by a silent field of unreadable eyes and faces, peering out at me from the factory rows of wooden desks. The teacher in front of the board paused in her lesson to join the masses in looking me over, assessing my external qualities before finally saying, “Hello, welcome to our class. Your name is…?”

I didn’t speak for a moment, still terrified by the 30-some students who were still staring at me, then shook my head and croaked, “Diana. Modica.”

The teacher swiped up her clipboard, scanning the list with a pointed face. “Is that a D-Y-A or-”

“D-I-A-N-A, M-O-D-I-C-A,” I spelled, becoming aware that my “accent”, however slight, might pose a communicative issue. The teacher found my name, making a mark on her page and placing her clipboard back on her desk, taking a glance back at me.

“There are open desks all along the back row,” she said, bored. “Pick whichever one you’d like.”

Lunch was the next block after homeroom, so I followed my teacher’s directions to the cafetorium. My eyes widened as I stepped through the doors; I hadn’t realized that high schools in America kept zoos. Girls sat on top of tables with their feet atop the benches that boys straddled. Soiled paper sailed through the air over vast distances, and shouts echoed violently in every corner of the cavernous room. A writhing mass of students was queued along the back wall. I could just make out windows behind them, through which women scooped unrecognizable substances into waiting trays.

I joined the back of the line, trying without success to avoid flying elbows and misdirected shouts. I shielded my head as the line moved forward, only breaking my cover to snatch up a paper lunch tray. I approached the first window cautiously.

Back in France and Italy, we’d been served a different dish every day of the week, each one pre-plated and accompanied by a succulent dessert. The prepackaged sandwiches and gloopy potato mash here did little to stir my appetite, so I dipped out of the line and swiped a plastic-wrapped apple from the basket at the last window. Without even considering sitting inside for lunch, I turned right around and headed out the door.

I found a quiet spot out in front of the brick wall outside the front office. The blue sky stretched out above me, unobstructed by trees or tall buildings. I leaned back against the wall, tipping my head to rest on the cool bricks. My sneakers slipped forward as I oozed down the wall until I crouched against it, resting my elbows on my knees to hold my paper lunch tray to my chest. I tore open the clear plastic trapping the apple, discarding it into my pocket to throw away later.

Munching on the apple, I looked disinterestedly around the schoolyard at the distant, jumping dots that were my classmates. They were organized into groups and separated by gender, it seemed, except for a few pairs on the outskirts. None were sitting close enough for me to make out their faces. I took another bite, my cheeks bulging around the waxy skin and tart juice as I chewed thoughtfully.

I could already tell that the next two years were going to be difficult for me. Between starting over making friends, different academic material and grading systems, and my trusted older siblings both being away at university, I was already feeling lonelier than ever.

Winter break rolled around and after a month and a half of American school in America, I was done.

“Don’t make me go back! Mama, please,” I pleaded, clutching my mother’s arm while she stirred the pot for dinner. She tsked at me.

“You need to finish high school. Otherwise you won’t get into college like Gina and Bobby!”

“But Mamaaaa,” I whined. “Can’t I do that back home? America suckssss,” I drew out the last syllable, at this point having all but melted to the kitchen floor, unwilling to support my own weight.

“Oh, now now,” my mother said. “Don’t you like anything about our life here?” I shook my deflated head, barely feeling the energy to muster a verbal response. “Not even your friends?”

“Mama, I don’t have any friends,” I said with frustration. “Everyone thinks I’m weird. No one sits near me at lunch. I’m the only person at the whole school who’s fluent in more than one language, and practically the only one who’s ever been outside of this damned country.” I sat up during my rant, crossing my arms over my chest and folding my knees. Mama just sighed, tapping the cuff of my blue jeans with her toe to shoo me out of the kitchen.

“I’m sure there’s someone else in the school you can relate to,” she said, turning back to her cooking. “You’ll find them.”

Christmas and New Year’s passed without much fanfare. Gina and Bobby visited, then left again for Brown and Vanderbilt. A week later, I stood in front of the school doors, my heart heavy with dread. A full semester of the monotone, lonely days I had gotten used to awaited me across the threshold. I bit my lip to keep my eyes from watering, startled by the sudden wave of emotion. Gathering myself, I adjusted my backpack on my shoulder, and hoped that something in my life was about to change for the better.

Just as I was about to pull open the door, a force from behind sent me sprawling to the concrete.

“Sorry!” A very un-American voice sounded from above me. My heart jumped. Scrambling to my feet, I wildly searched for the source of the sound.

A girl stood in front of me in a yellow cardigan, her hair as white-blonde as the hottest coals of a fire. “You are alright?” She asked me, her eyebrows knotting with concern. I stared at her in disbelief. Could my prayers have been answered? Here was the first person I’d met in this all-American town who seemed at first listen to not be from around here. Here was the first person I’d met that was like me.

My lips turned up in a wide smile. I stretched out my arm for a handshake. “I’m alright,” I reassured her. “What’s your name?”

The girl smiled in relief. “Bodil,” she said, returning my gesture. “I am an exchange student from Sweden.”

My smile widened impossibly more. “Hi, Bodil! I’m Diana. Do you want to eat lunch with me today?” Bodil nodded, falling into step with me as we walked into the school. “Great. I think we might have a lot in common.” 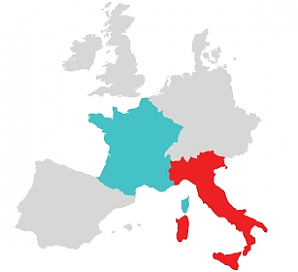 This story was written and recorded by Diana’s daughter, a student in Palo Alto, California.