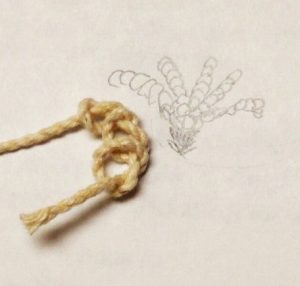 drawing of the crochet flower gift

Sunlight shines through the windows onto my desk. The air is filled with the whisper of pencils scratching out various answers to the problems the teacher wrote on the board. I am bent over my own paper, carefully planning out my next answer. I mark the paper with a single letter, then, “BOOM!”, a distant thunder of sound, I can feel the vibrations through my desk. As quiet falls upon the classroom, a classmate’s pencil is shaken just enough that it rolls off the edge of his desk, and clatters to the floor. We stare at the slowly rolling pencil, as if this was what had broken our ephemeral peace. I begin to bite my already torn nails. Our teacher clears her throat. “Okay, let’s -” another threatening boom, louder this time. It is quickly followed by a few more, but the sounds remained deadened by distance. Daiam stoops to retrieve his pencil. We are not in danger this time.

The civil war in Lebanon began when I was six, and has paused and started again multiple times. If there is too much fighting on the streets, there is always a chance school will be canceled the next day. It drives me crazy. My parents taught me from a young age: Education is the best ticket to a better life.

Our teacher’s voice pulls me out of my reverie. “Don’t worry, it’s too far away to harm us. Class is almost over, so please turn in your homework.”

Amid the shuffle of footsteps, chairs pushed back with a screech, and papers flapping about, Daiam raises his hand. “Yes, Daiam?” our teacher asks.

“I couldn’t finish my homework.” He grins. “You know, there was too much fighting on my street.” Daiam can’t keep a straight face.

The teacher sighs. “Right, of course there was… ” The class snickers. On which street was that? I thought, along with everyone else. This was the most overused excuse in existence! Then Daiam stood up and pulled out a sheet of paper, covered with neat writing. “Just kidding,” he laughs. “Here it is!!” The ensuing laughter calmed all of our nerves. That was the last day I saw him.

The street fighting had worsened, so school was canceled for the rest of the week. This left me at home on my 13th birthday. When the alarm sounded, my father grabbed my arm, and my family rushed down flights of stairs to the bunker underneath the apartment building. We were soon joined by many other people, because our building had the biggest bomb shelter in the neighborhood. The yellow fluorescent lights brightly light the area. Sounds bounced chaotically off the walls, and the air seemed to swell with noise. People were speculating about the explosions that might soon shake our cement-walled room. When thunderous booms began penetrating the shelter, my heart beat too quickly. My hands shook slightly as I began to chew on my thumb nail.

“Hey, stop that.” My mom scolded me gently. “Keep doing it and I might have to taste them myself, they must be so tasty!”

She feigned confusion. “What? You chew on them all the time!” I groaned, but she had succeeded in bringing a smile to my face. Of course, I didn’t let her see it.

One of my brothers pulled on my hand. He was only a few years younger than me, but his head did not quite reach my shoulder. “We are going to celebrate your birthday.” My mouth opened, and I just caught a glimpse of a playful grin, before he dashed away.

As the people nearest him quieted to survey the source of the call, a group of men listening to the radio news in a corner told us to quiet down. Others turned as well, curious as to the quickly spreading hush. His commanding voice surprised people, coming from his diminutive frame. I hurried up to him. “This really isn’t necess -”

“IT’S AISHA’S 13th BIRTHDAY!” He had shamelessly interrupted me, and grabbed my arm to hold it up. Short laughter billowed among a small explosion of grins. Some were only tiny smiles, but they were all there.

A young man I didn’t know pushed the moment forward. “Well Then!” He squeezed through the crowd to address everyone on the stage created by my brother’s pure audacity. “We Know What We Have To Do!!” With a cheery glance toward me, he raised his arms with his hands clasped around imaginary conductor batons.

“And a Haaaapppppyyyyy -” The song swelled and soared through our shelter as the crowd joined in singing Happy Birthday, different languages joining together as one under the same tune. The sound of the distant bombs faded into background noise before the tenacious song. I looked from my brother’s beaming face to the singing crowd before me, and I broke out into a full-face grin myself. I never would have invited this many people on my own! A while after the song ended, an old lady came up to me with a crochet flower she had made herself. It was a beautiful present.

Little did I know that when I went to school the next week, Daiam would not be there. He had been killed walking to school that very morning. I still remember the shock of hearing the news. I was doing school work in my room in the apartment building, and my dad came into the room behind me.

“Aisha.” Something about his voice made me pause and turn around. He walked forward and sat down next to me.

“The school posted a note, it’s about Daiam.” I knit my eyebrows. “I noticed he wasn’t at school today, but why would the school publicize that?”

Before my father could answer I drew in a breath. “Has he been hurt?” My father responded, but I couldn’t process the words. “Sorry, what?” He said it again but I could not hear the truth.

The room seemed to fade away until all I saw was his solemn eyes, and his mouth as it formed the words: “Daiam is dead. He died in an explosion, one of the militant groups planted a bomb in a car.”

“But… ” I could not finish the sentence. A hot painful lump of emotions had had choked off my voice. I turned away and tears began rolling down my face. My body tensed with as anger rose within me, in sympathy with my grief. “WHY?” I yelled. “Daiam Wasn’t Part Of The War!” My voice quieted suddenly and my voice cracked as I asked “Why did they leave that bomb there?” My question wasn’t addressed to anyone. I grew up in the war, but until then the casualties were those I heard about on the radio, separate from my own life. I was only expressing my shock at how the the barrier between those tragedies and my life had suddenly been revealed as insubstantial illusion. I had thought that we were separated, with those who flaunted their views as the unfortunate targets, and us as the quiet bystanders who flew under the radar.

Our family had always kept a low profile. Although we were Maronite Christians, we never wore the cross, or prayed in public. We lived in a place where our religion was the minority. It was only common sense.

The summer following Daiam’s death, my parents resolved to emigrate our family to a place where we did not have to fear walking outside. My parents left to France with my younger brother, and I continued my education in an American college. My mother had instilled within me the sense that women should be financially independent. It was this, and the fact that I had always been good at mathematics and science, that had led me to go into engineering. While I would miss Lebanon, America was the best place for me to pursue my future. It had the best engineering schools in the world, and it was safer.

My parents knew that college was essential for my siblings’ and my financial well being. They were kind enough to pay for our undergraduate studies, rather than keep money for us to inherit when they died. Still, they made it clear that that I had to pay on my own when I pursued graduate studies. Throughout my studies, there was a great pressure to earn top-notch grades. It wasn’t just from my family, earning the best grades was the way the the way I could become a citizen. Until I got my green card and officially became a permanent resident, I felt that I could not change my job. My company was the one who would pay for the lawyers to justify hiring an immigrant to the US. If I changed jobs, it would mean starting the process all over again. To gain citizenship this way, I had to be among the best of the best when it came to my grades and work. At the same, I continued to keep an otherwise low profile. I wanted to make sure that when the time came for my status to be decided, there was as little as possible in my file that might endanger my position. This meant that I did not start to discuss politics or religion, nor publicly practice my religion, until after citizenship.

I was aware that I had the freedom to wear the cross visibly, or even to criticize the president if I wanted, but I didn’t make the point of doing so until many years later. I became a citizen in 2002, fifteen years after arriving in the US.

The first time I discussed politics, it was a fully conscious decision. At the time, most people around me disapproved of President George W. Bush, so it wasn’t unusual for someone to join in a conservation criticizing him. Still, I was doing what I had never dared attempt before. I may not remember exactly what we said, but I can recall clearly how my heart beat with fear and exhilaration. I had to repress the urge to glance furtively around, half expecting to be caught and punished for my audacity. I calmed down slowly, and eased into the conversation. At one point I mentioned Lebanon, and I thought of Daiam. I had been slightly amazed by what I had seen as a certain level of recklessness in how he lived his life, but even he had not spoken in defiance of the government. Even if he had though, no one should be suppressed from speaking their mind, and definitely not killed for it. I mentioned Daiam aloud, and my anger at the militant groups. Finally, I was exercising the new rights I had gained through my pursuit of education.

The next day I wore the cross visibly on a chain link necklace, and stepped proudly into the sunlight. I’m not going to hide any more, and I’m going to speak my mind even when I go abroad. Education led me here, and my parents supported me all along the way. It is really true, education is the best ticket to a better life. It was me parents who set me on this path, and if not for them I would not have been able to pursue my education. I am grateful for that, and I’m not ever going to give this up.

This story is a story based on an interview by Allison Brand, a student at Palo Alto High School.