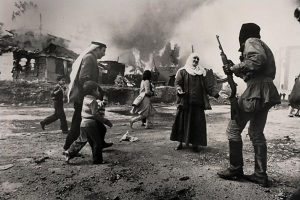 Born on February 28, 1961, Shahe Krakirian began his life in Beirut, Lebanon living in a small apartment in with his whole family. He shared a room with his two younger brothers. Though they sometimes got into verbal arguments, and even occasional physical fights, his younger brothers were two of his closest friends during his childhood. It was not as easy to find instantaneous sources of entertainment several decades in the past as it is today, which promoted the creativity that my father and his siblings and classmates used to allow themselves to have fun. My father enjoyed spending time with his parents and siblings, and one of his favorite things to do during this period was to go to the nearby beaches with family and friends. Other activities that he found amusing included going to the movies, playing guitar, and finding records from his family’s collection to listen to. All in all, life during this time was pleasant and lively.

What is so significant about this year, one may ask? The year 1975 marked the beginning of the Lebanese Civil War. There was fighting across the country, resulting in many schools being shut down, including my father’s. It was a time where all of the citizens of Beirut were living in constant fear of possibly being victims of collateral damage. Residents often needed to gather in the basements of their apartment complexes when there was fighting nearby. It was at this time that my father’s family decided to move to France until conditions in Beirut were stabilized and the residents returned to a livable state.

After a year of living in another apartment in Paris and attending an international high school, my father’s family decided to move to Canada. Living in a house in Montreal, they believed that this would be their new permanent living situation. My father was getting used to living in the area, and he had already become a part of a solid, tight-knit group of friends from his high school, which he graduated from later in the year. However, in 1977, their family received news that the war in Lebanon had come to an end, and Beirut was once again a stable living neighborhood. After hearing this, they decided to finally return to Beirut that year.

Because the school system in Canada was different than the one in Lebanon, he graduated high school once again in Beirut and was admitted to the American University of Beirut (AUB), where he studied engineering. During his time there, he made many new friends, and also discovered how much he enjoyed hardware engineering. After graduating from AUB, he decided that he wished to earn a master’s degree, so he applied and was admitted to Stanford University. After moving to the Stanford dorms in Palo Alto, he only went back to Lebanon once to visit his family. His family, on the other hand, came to visit him in California quite often.

During one of their visits to the US, his family received shocking news that the Lebanese Civil War had started back up. Realizing that their apartment had once again become an unlivable place, my father’s family settled in their new apartment in Los Angeles, while my father was still studying at Stanford.

My father graduated from Stanford in 1984 with a master’s degree in engineering, and began looking for work. Of course, he did not have to look very far due to his qualifications, and he began working for a tech company as a computer chip designer. The rest of his family was living happily in the Los Angeles area, and my father would occasionally take trips down to Southern California to visit his parents and brothers. During one of his trips to LA, he found out that there was a woman named Leda living in the area who he had gone to middle school and college with back in Beirut. They spent some time with each other, exchanging stories and experiences. One thing led to another, and they began dating. Only nine months later, they got married and moved to a condominium in Sunnyvale, CA. A few years later, they moved once again to Milpitas, and once more to Palo Alto into their final permanent home. They had three children, oldest sister Lori, then my sister Liana, and finally, myself.

My father spent a large amount of his life moving around, trying to find an area in which he could have a stable life. After living in many different locations, he was finally able to purchase our current home and raise a family comfortably.

The story of Shahe Krakirian was written by his son, Armen who is a student at Palo Alto High School.