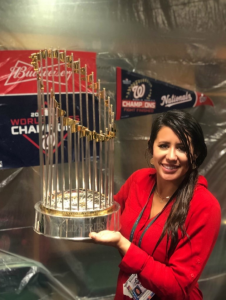 Melissa holding the Commissioner’s trophy that the Washington Nationals received when they won the world series in 2019.

Melissa Strozza was 5 years old when she and her family moved to the United States in the early 90´s. They were living in Cartagena, Colombia, but there was a tough situation in the 80´s and 90´s.  Colombia went through a big civil war, so jobs were hard to find.  Her family decided to move to the United States seeking a better life and education.

When she and her family arrived in the United States, they settled in Florida. Right away, she was aware that she wasn’t surrounded by her big family as she was in Colombia. That was a big adjustment to her, because the life she was beginning to have was different from the life she knew in her country.

The experience was scary and confusing. She was trying to learn English, different geography, tasting different food, but she took to it relatively quickly and was excited to try new things. She discovered wonderful things in the U.S that she’d never seen in Colombia. She also felt joy and happiness because her parents took really good care of her.

She remembers being intimidated in the first day in kindergarten, because she was not able to speak English.  She only knew a few words and she didn’t know how to use different tenses. Her teacher was very kind and pointed out things. It was a challenge to communicate with other kids, but as they were kids, they always played and had a good time. It also was a way to expand her vocabulary and learn English. Years later, she decided to study communication because she enjoys all the aspects of communicating, reading and writing.

Her journey has been tough, with lot of sacrifices, tough financial situations and feeling lonely without family at times, but it was for the best at the end. Though it hasn’t been easy for her and her family, it has been 100% worthwhile. She is proud to become a college graduate in the U.S and able to pursue a career she loves. Also, Melissa is very thankful for all the opportunities that arose for her parents by coming to the U.S.

Nowadays, she lives in the Washington DC area, and she works as a manager of communication for the Washington Nationals – a  major league baseball team. She describes it as an exciting job.  She works 7 days a week and gets to travel to different countries around the world.

She is bilingual, in Spanish and English. She is thankful that she is an immigrant that came here and got lost in books and reading when she was a kid – trying just to learn English.  Now she is competent in written word and public speaking and enjoys an exciting job.

This narrative was written by Maria Jose Ruiz Del Rio, who is Melissa’s cousin.