Challenges For a Young Immigrant (Mexico) 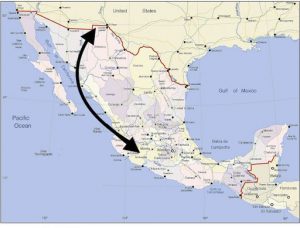 I was a teenager, only 15 years old. I was a person looking for a better future and a better way of living.  Me, my mom, and my stepdad left Michoacan, Mexico to live in the United States.

My parents and I were living in Mexico, Michoacan 1978, which was in the center. Durante este tiempo el aire estaba limpio, el población estaba pequeño, y los ríos estaban limpios, during this time the air was clean, the population was small, and the rivers were clean. También los locaciones estaban hermosa por sus colores, also the locations were beautiful for their colors. Times were very difficult because the government didn’t support the people. Especially when we had a huge family of 7 and other relatives too. Our family was humble while having no money. That didn’t matter to me, life was still good. It was like visiting an island that is magical, but you don’t have money.

My father and I went to a rio, a lake, where we fished for shrimp because we couldn’t afford to buy food. At the rio, it smelled like fresh brand new water and it was swim-able. I saw the fish swimming clearly and felt the fresh mist of water. Pollution was never a thing because the people in Michoacan around 1980 made a rule among the people to respect the rios.

Within the small area of Michoacan, the people took responsibility to take care of the Earth by not using automoviles, a car, as much. When I looked up in the sky I told myself, esta es la mejor parte de mi vida, this is the best part of my life. The sky was so clear you could see the clouds in a perfect form.

When I was 15, in 1994, my mother told me she was leaving for Estados Unidos, the United States. She told me in a melancholy tone that changed my mood completely that whole day. My mother said, “Mija, yo te amo pero me voy mover para Estados Unidos”, daughter I love you, but I’m going to move to the United States. I felt my whole world fall into a void. I told her, “Pero porque mama”, but why mother. She said, “Es porque necesitamos un manera para obtener dinero para ustedes”, because we need a way to get money for you guys. Then I took some time thinking to myself,“Quiero ir con mi mama o quedarme en México con mis hermanitos?”, do I want to go with my mom or stay in Mexico with my little brothers? So I decided to leave with her.

Yo no creo dejar mis cuatro hermanitos en México, I don’t want to leave my four little brothers in Mexico. I was really sad, but I knew it was the best choice I had to make because I can’t let my mom go by herself. I was the oldest so I needed to go while my brothers were still very young in around 1994. I would never think that day would come that I would say to my brother, “Hermanitos te amo mucho pero me voy ir de la país, cuidasen ok, te amo mucho a ustedes y no reuniremos de nuevo ok, adios”, little brothers I love you very much, but  I am leaving the country, take care okay, I love you very much and we will meet again, bye.

The first important step was that my mom needed to pay for a coyote, a person that guides us into the United States. For each person it costs 500 pounds. It was me, my mom, and my step dad.

We were taken to a tunnel in a gas station where it was abandoned, smelled like alcohol and gasoline. The windows were covered with wood barricades, broken pieces of glass on the floor, and bones from food. There we went in and there was already a tunnel setup. From there we went through an almost limitless tunnel which was very painful for my bony legs that were like a stick. There was dirt falling like it was about to collapse and I could even taste the dry dirt that was filled with rocks. I could hear my teeth almost breaking while trying to get it out of my mouth. After a long time, we reached the end and noticed it was very dark which meant something bad was going to happen. When it is night time anything can go your way if it is positive or negative.

There was a huge problem, the border patrol was checking the area from above with light. We needed to run from the end of the tunnel to the tomato plants near us. That was when the border patrol pilot found us running and caught us. They screamed, “Hey! If you move one more step, you will be shot and even killed!” At this moment I felt my heart drop immediately and started panicking in my head. “Como los van a tratar a nosotros?”, how are they going to treat us? When they reached our location, they physically threw us into the ground and pushed our faces in the dirt while putting handcuffs on us like we were a threat. But actually I felt that they were a threat to us. Then shoved us in a white van with a lot of patrol people in the back with us. We were beaten on the way to the immigration center to be deported back to Mexico. This exact thing happened four times in the same year 1994. Until the 5th time in October 21,1994 we made it through the exact way and escaped in a car while being in the trunk.

When it was our 5th time crossing the border on October 21,1994 , on that same day around 6pm we got to my aunt Trina’s house located in the outskirts of Los Angeles. After getting dropped off by the coyote in an abandoned alleyway, my aunt Trina picked us up and on the trip to her house we passed tby so many fast foods, buildings (offices and companies), and somehow a beach. Los Angeles was very populated and felt like the walls were more tight than Michoacan by having more buildings, more people, and less freedom. The beach was like the garbage can of Los Angeles which disgusted me because that showed the people are selfish.

Eventually I was starving so I told my aunt Trina, “Tia Trina podemos a comer hamburguesas”, aunt Trina can we eat hamburgers. She responded with, “ Esta bien pero no te va gustar”, ok but you won’t like it. Around 1994, this fast food place was getting very popular named McDonald. I remembered the exact order which was a cheeseburger, with medium fries, and a large coke. My first impression was that la carne sabia que no estaba recién hecha, the meat tasted like it wasn’t freshly made. The meat was greasy, juicy, and packed with flavors, but felt like it wasn’t natural. I thought to myself,“Tal vez les ponen químicos”,  maybe they put chemicals in them. But as time passed after eating my meal, I started to feel my stomach erupt like a volcano because it was my first time trying the food in America. When we got to my aunts house, I immediately went to the bathroom.

As time progressed, I felt the same struggle as in Michoacan from 1978-1994, that we don’t have money. So then I got my first job which was a babysitter. My mother, and step father were struggling to find jobs so I had to be the one to give them an extra hand. This caused me to lose a huge opportunity to have the best education. On October 31,1994 I started my job. This job helps us pay off the coyote.

Ever since I moved to the United States, I kept a thought of,“Como estan mis hermanitos”, how are my little brothers doing. And I always feel the need to cry because they are my world and not having them beside me is like a whole different world. Which brings me to that the discrimination I have received during 1994 brought me down as well. Whenever I went to a grocery store, I got the feeling of everyone staring at me like I was some threat. But at the end it made me feel even sad that people judge someone for their color and assume I’m a threat.

From looking back to 1978-1994 in Michoacan I would never have the resources and a beautiful family I have now. I currently live in the Bay Area. I recently had a decent job where I worked as a custodian in a vegetable packing company. But near the end of 2018 I had a terrible accident while working. I slipped on the endless wet floor because we worked in a cold area and we washed the dishes with hot water. I landed horribly on my right knee. The company didn’t want to help me pay my bill from the hospital. The accident took place in their company and they have to be responsible, but never once took a step. From the accident I would never work again because I can’t do a lot of movement with my knee injured.

A huge accomplishment was  Di a luz a mis hijos en Estados Unidos, lo que significa que tienen papeles y tienen una vida mejor de aquí en adelante, I gave birth to my kids in America which means they have papers and have a better life from here and on. After giving birth to my first child named Joaquin, it gave me a sense of purpose in life of being in America to realize that the best option for moms and dads to have a family without having papers themselves, should give birth in America where their kids can have papers. After years and years, I came to realize that having papers is like having 1 million dollars because you can do anything with papers the same thing with money.Estoy orgulloso de la vida que mis hijos han hecho en los Estados Unidos porque van a tener una vida mejor que yo y es por eso que me mude a Estados Unidos. No quería que lucharán como lo hacía para tener dinero todo los dias, I’m proud of the life my kids have made in the United States because they are going to have a better life than me and that’s why I moved to the United States. I didn’t want them to struggle as I did to have money everyday. I remember that risk of working because I used a fake security number just to work. Life is filled with risks so one can succeed in life. This is a life lesson I learned thinking back from 1978-2020.

This interview and narrative were done by the immigrant’s son, a student.