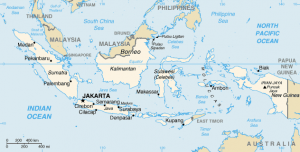 This project inspired me to learn more deeply about one of the people that has become such a massive help to my family over the past few years. Bridget came into my family’s lives when my grandfather was diagnosed with dementia. She is one of two full-time caregivers but has also become a symbolic member of the family. While I have spent a lot of time talking to Bridget, hearing about aspects of her life, and telling her about mine, I knew that this project would give me the perfect opportunity to learn more about her experience coming to America and creating a life here.

I started the interview by asking Bridget why she came to America from Indonesia. She looked up, and said, “Who wouldn’t want to move to America?” Hearing Bridget’s words, I was reminded of the reasons so many people move here: freedom and opportunity.

Bridget has been here for twenty years now, but even after that time, there are so many things to miss about home. She told me about family members that still lived there, who she had not seen for a long time now. She reminisced about how delicious Indonesian food is. It is increasingly difficult for her to find her favorite dishes in California, and while she can still make the food, it is not the same. Food makes such an impact on our lives.; it’s such a large part of home and we don’t realize it until we leave.

Even though this country has many problems, it also has a level of opportunity and freedom that people in many countries do not have. Bridget truly believes and understands that in America, she can have a better life. On top of that, Bridget already had friends and family here at the time of her immigration. “Because my parents and brother are already here, I had no problem finding a community.” They also happened to live in a place with a lot of Indonesian immigrants. Instead of having to start completely new, Bridget had pieces of home all around her. She could talk with her neighbors, family, and friends about their shared experiences. The community that Bridget had on arrival kept some of the homesickness at bay and reminded her why she was in America: for the opportunity and stability that she never had at home.

Bridget left Indonesia for multiple reasons, but a huge one was violence and conflict. There has been a religious conflict between Christians and Muslims in Indonesia since 1998 when a Muslim man was stabbed by a young, drunk Christian. Outrage from this sparked religious gang violence which eventually escalated into a Muslim militant group. “It was especially prominent in the village I came from,” Bridget told me, “But it spread to various islands in Indonesia.” She did not want to have to keep living surrounded by violence so she came to America.

“Over here as long as we want to work, we can have a decent life compared to my home country.” She went on to explain how difficult it would be to get something like a car in Indonesia because unless you were the boss or owner of a business, the salary is very small, and buying things like cars end up being very expensive. In America, Bridget lives in a nice house, drives her own car, and is able to support her family.

I could hear the pride in her voice when she began to talk about the opportunities her children will get in America. Here, there is so much hope for their future. They can get the best education, and Bridget can work to support their future dreams. “Here, I can work to provide the best education for my children’s future,” she said, smiling. Not only has Bridget been able to create a better life for herself, but she has been able to open so many doors for the next generation of her family.

“If it was very easy to get a visa to America, I believe my home country would be empty.  As an immigrant, I want to live legally in this country. But the process to become legal is not easy.”  Bridget did not immigrate to take something from Americans, she came here because she wanted to live the American dream, and she has been able to do just that. She is proud to be able to legally work here, but Bridget wants citizenship. Even though she has a good life here, she wants the stability being here legally would provide. Bridget wants to take all of the hope, opportunity, and freedom of this country and truly live out the American Dream.