From Cabugao to the Bay (Philippines) 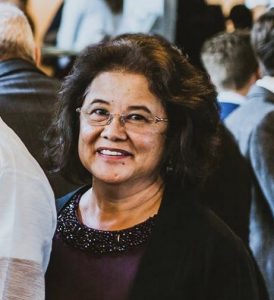 Elizabeth was born in Cabugao, a rural town in the Philippines. Recounting her memories of Cabugao, she told me, “There were a lot of poor people. It’s called the barrio, Padayog in Ilocano (dialect of this region). My grandparents’ house was next to our house, so we saw them everyday. I used to have a black cat, and my dad had a water buffalo named Galindo. One of my favorite memories was going to this little hill that my grandpa owned. I would sit there and I thought God was there — I don’t know, it was beautiful there, clouds were there. Now they say my cousin’s oldest sister is buried there, sometime during the Second World War. On my way to school, I would pass by my grandparents’ house and sometimes stay there.”

As a child, she helped her parents with the farm. “I watered the vegetables and picked them for my mom to sell in the market. I even harvested rice! That’s how I got my spending money. I used it all on candies (laughs). We only got new clothes when there was a special event. I was an only child for five years. I was jealous when your mom was born. She got all the attention, so I would think, ‘Why did you abandon me?’ I used to pinch her to make her cry. So when she moved to the US with my dad, there was nobody to torture.

“A lot of people were coming home, saying, ‘Oh, it’s nice to come to America and find a job.’” Convinced, Elizabeth’s dad flew to the Bay Area in 1969. Elizabeth’s younger sister soon followed. Her dad couldn’t afford for Elizabeth and his wife to join them until a few years later, when Elizabeth was 17, starting college in the Philippines.

“I was excited, because everybody was saying how beautiful this place is. When I got to the US, I wasn’t really surprised — except that in order to go somewhere, you have to have a car. We would always walk to Safeway because it was close by. We lived with Auntie Evelyn. I also heard that people were all very friendly here — and well, they were not really. But I was shy, so I wasn’t really friendly either (laughs). I used to not talk to people because I didn’t really have anything to say. Then I started to listen to the radio, and I’d get ideas. I thought, ‘Oh.’ I guess I learned a lot.”

When Elizabeth came to the US, her parents told her, “Go to school, be a nurse.” She continued college in the US, but decided to study pharmacy at De Anza College.

“In school, there was no one to talk to. It was a culture shock. I knew how to speak English, but my accent made everything sound different. There wasn’t really any Filipino community. The way of teaching and test-taking was totally different from in the Philippines. I wanted to stop going to school. I’m a person that if I’m not good at something, I stop. So I stopped college and started nighttime work. You know your grandma, my mom always worried. She would stay up and wait, and when I got back from my shift, usually around midnight, she would say, ‘Oh, you’re just coming home now?’

“My first job was in Palo Alto, assembling digital watches. I started sending applications to the Spectra-Physics office in Mountain View every month until I got hired in 1977. Forty years later, I’m still there. I like it because there are better opportunities to learn more things; it’s more interesting. And that’s how I met my mother-in-law.

“We started talking, and then she goes, ‘Can I go to your house sometime?’ Little did I know, she brought her son. ‘Oh by the way, this is my son.’ And he goes, ‘Would you like to go out sometime?’ I said, ‘I guess.’

“He brought a pizza, and we sat on the sofa, and Dad sat in the middle until he left. Can you imagine if you were on your first date, and your dad had to be there? (laughs) It was very uneasy but, well, we survived. After a year of dating, we got married in 1979. We lived with my parents for a while, and then we got a condominium. We had two sons. We moved here, to our current house, in 1987.”

Elizabeth’s two sons are artists. “I didn’t think they would both pursue art in college and for a job, but I told them, ‘Do what makes you happy.’ I was worried about how I was going to support them, but I didn’t want to force them to go to school for something they didn’t like. So they’re both artists now. And they’re doing well. That kind of career would not be possible in the Philippines. In the Philippines, there’s politics in everything; you get a job based on who you know. But in the US, I think that as long as you work hard, you can do well. But you have to have a positive attitude.”

This story was written by Elizabeth’s niece, Theresa, a student from the Bay Area.