Broken Bridge from Dreams to Reality 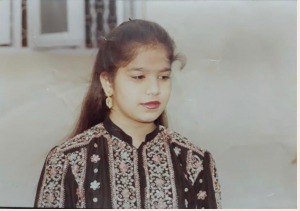 Mama before her marriage

I sat on the edge of the bed waiting for Mama to settle herself in the room. She sat down with her cup of green tea in her hands which she drinks at least twice a day. Her bedroom was quite small and crowded, but we had no other place but here to have a conversation without our guests and family members disturbing us.

We both observed the room for no reason and she sighed “Little did I know I was going to be spending my life in these tiny rooms.” I was a little confused why she said that because from what all I have heard while growing up was to be thankful for whatever we had.

Mama came from an extremely wealthy family back in Hyderabad, India. “My father and his brothers were all architectural engineers and earned a lot of money,” she said with a slight smile on her face. It was almost as if she was showing how proud she felt of being known as “Ibrahim Ghori’s daughter” and coming from a well known and respected family. Mama was used to her pleasurable life in her “mansion-like”home and she mentioned again, “Little did I know my life was going to change.”This time she said it very slowly and sort of stuttered as she spoke. I got a feeling that she was going to burst into tears.

Mama had always thought of coming to the United States. Growing up she’s been greatly fascinated by the “western wonders” as she says with a little grin.  Her obsession with some of the famous Hollywood actors and wanting to dress in western outfits was one of the main reasons she was interested in America.  Whenever she heard of America, she thought of luxuries, having several maids around her, and just living the best life. “Back in India, everyone was brainwashed into having false assumptions about the United States of America” and “they had no idea of its reality” Mama said with no emotion. People felt as if coming to America was just a way to escape India’s corruption.

We both looked at each other laughing knowing how stupid it was to believe our lives will become better in the United States. I told her to take me back to the time on how she actually ended up coming to the United States. Mama looked at me funny and said to me, “Let me tell you a stereotypical ideology in India.” I looked back at her quite interested in knowing what she had to say. Apparently, girls “died” to move to the U.S. in hopes of living their western dreams and the only way for them to do so was to marry an engineer or doctor that was working in the United States. And that’s exactly what happened with my mom. 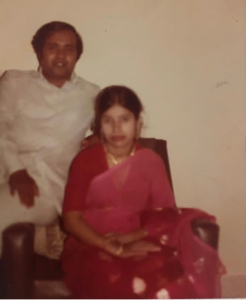 “I got a proposal from your dad’s family for marriage one day, he was working in Wisconsin at that time, my parents approved and I got married within two weeks” Mama said without hesitation and a single breath. I stared at her in shock. I thought to myself that she was joking, but it was completely “normal” for her back then and she was “happy” with it. And that’s how her journey towards making her dreams come true began.

Mama was boiling out of excitement when she found out that she will be moving to Wisconsin. She had started planning out all the places she wanted to visit for her honeymoon including the iconic Indian honeymoon destination: Las Vegas. Mama’s face lit up as she remembered each and every moment of hers. With a beaming and almost childlike smile, she said “I bought my first ever pair of jeans right the day after my family fixed my marriage.” I started laughing, calling her crazy. Meanwhile her family was preparing for her wedding in two weeks. My sweet Mama forgot that she was getting married and was only thinking about moving to the United States. It hadn’t really hit her that she was going to be married so soon.

Although mama had been getting overly excited, it wasn’t until at least another three years before she permanently moved to the United States. Her first few years of marriage were spent in India while my dad was working in Wisconsin. Mama was also studying at the time completing her med school and clinical rotations. She had gotten her visa when she got married in 1998. Meanwhile she “spent a couple months in the UnitedStates and a couple months in India.” In those days, she hadn’t really experienced the “true American” lifestyle and ways of settling down because for her it was just a vocational visit everytime she came.

In 2006 she received her green card or permanent resident card. She finally became a citizen of the United States in 2011. Since my dad was previously living in the United States, it was a much smoother process for Mama compared to many others. I hadn’t realized how many steps it takes in the process of just becoming a citizen here. I took a deep breath as I thought of how stressful and exhausting the whole procedure might have been. 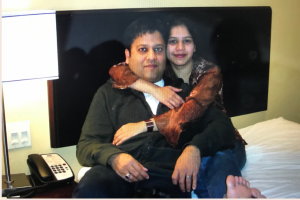 At first it was like a dream come true, she said. She was amazed by how fast moving the country was and how clean it was. The only thing she didn’t like was “how bland much of the food tasted.” We both let out a faint chuckle. But, she did really enjoy all the junk food including the typical pizzas, desserts, and eating everything in huge quantities. Mama was surprised to find out how there are no maids in the homes like back in India, and she had to do everything on her own. We both agreed that it was a good thing to be independent.

Mama had moved around the same time the 9/11 attack happened. It was very difficult to travel frequently starting from those years because of the discrimination she’d face. As a muslim, she wore the hijab. During security checks, she would get extra checks and have to wait longer in the security check area. Even with her last name she would face the same thing. She was “exhausted and annoyed” by this treatment in the United States. She felt as if she constantly judged in the public and eventually stopped wearing her hijab. This is perhaps why she had never forced me to wear one. As years went by, the muslim community has developed vastly in the United States and she says “alhamdulilah I can go pray at a mosque without fear.”

When Mama got married, it was done on the basis that she will complete her education afterwards. She moved to California after living in Wisconsin for only a few months. She completed her USMLE steps while she was pregnant with my siblings. It was definitely not an easy thing for her to do, but she still managed to pass them all on her first attempts. Both Mama and I certainly feel “proud” of her. Mama’s face was glowing with the immense happiness and feeling of accomplishing something.

Mama had four kids including me. 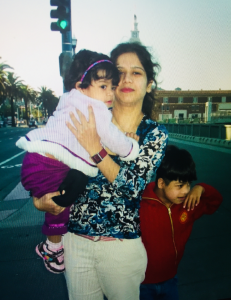 My older brother has Downs Syndrome because of his disability, mama had to give up on her goals of doing her residency for medicine just so that she can take care of him. Taking care of him without family in the country was the toughest job for Mama. There were many times where she felt so physically and emotionally drained doing everything on her own. My dad started facing financial issues as well causing us to make compromises on many things in life.

As mama said, back in India, life was super simple and at ease. Coming to the United States as an immigrant with no other relatives made her realize how her American dream was shattered. All she had imagined prior to marriage was just to “remain in her dreams” and that “was never to become reality.”

Mama and I got emotional talking about our struggles. Tears kept weeping off of Mama’s face and it was greatly difficult for me to see my Mama cry. I knew that I could never feel the immense pain Mama has had to suffer, but the least I could do was comfort her and assure her that my siblings and I were going to be there for her and my disabled brother at all costs. 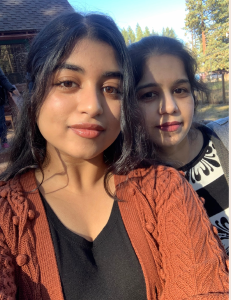 This led me to asking her why she never moved back to India. Mama had been living here for more than 20 years and has made her own community of friends which are like family here. She said she can’t just leave her kids and has to support them as they study and establish their own homes in the future. Additionally, moving back to India, would be another struggle to adapt to cultural standards once again and a different lifestyle. There aren’t as many advancements and proper education like in the United States in India.

Although Mama has faced several challenges in this country, despite coming with her dreams she had hoped to live, she still finds this country as her home now. It is a place where “I had seen my kids grow up” she said. She feels that she has more freedom in the United States to do what she wants to. At last, she can’t wait for her kids’ own families to grow and she wishes to experience that moment.

The interview and narrative were done by Zoya Syed, a student in the Bay Area.