Border Kept Her Separate From Family At Difficult Times 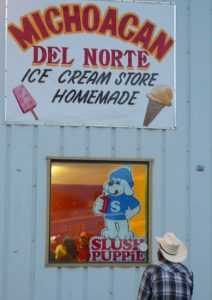 Photo is of a different ice cream shop; by Kit B.

One of the memories she has from when she first got here was her first shower. In Mexico she was used to taking bucket baths. In her first encounter with a shower here she was very confused because she was not given a container or bowl she could use to pour water over her head.

When my mother, Rosaura Cisneros Mendez, was 26 she decided to immigrate from Uruapan, Michoacan Mexico, where she was born and raised, to San Jose, California. I decided to write about my mother because she had already told me a lot of interesting stories growing up but I never took the time to ask about her full story. I was excited to learn more about the reason why I am where I am today.

My mom had heard good things of the U.S. back in Mexico but never entertained the idea of coming over here until her husband at the time brought it to her attention and she couldn’t find anything wrong with it. In Mexico she worked at the ice cream shop right next to her house which was also owned by her mother-in-law at the time. My mom was the oldest of five siblings, who she left behind in Mexico along with her mom and dad. She was married with no kids and when her husband suggested they come to the U.S. She had no hesitation. She knew he had been to California before and she trusted him. When she told her parents they were not surprised or upset at all because they knew she was married and she would have to go with her husband who they trusted.

Coming to the U.S. my mom feared she would get caught by border patrol. She was sad that she was leaving her family and she couldn’t bring anything more than the clothes she was already wearing to remember her home. Her first time crossing she crossed with her husband and her sister-in-law. She remembers her sister-in-law laughing while they hid under bushes at night from helicopters shining lights down from from above. The “coyote”, who was the person in charge of sneaking everyone across the border, would tell them not to look up because their eyes would reflect the light and they would all be caught. Her sister-in-law could not stop giggling because she had remembered seeing a movie similar to their situation and she felt as if she was in it.

When my mom first got here she recalls everything being so foreign and different. The food and environment were two of the main things she remembers finding so different. One of the memories she has from when she first got here was her first shower. In Mexico she was used to taking bucket baths. In her first encounter with a shower here she was very confused because she was not given a container or bowl she could use to pour water over her head. She didn’t know how to work the shower so she had to get down and put her head under the bath faucet in order to rinse her hair.

After four months of being in the United States her father passed away. She went through a lot of emotional pain because she was very close to her father. Being the oldest of her siblings, she felt horrible she couldn’t be there for her family. Her father was the man of the house. He held everything together and at the time of his passing her brother was too young to take charge. She wanted to go back but since she couldn’t she mourned his death alone. My mom often called home to cope with her sadness when she missed home. Time went by so fast for her here because all she did was work and go home. After three years her mom grew anxious because she had gone so long without seeing her. My mom went five years without going home and seeing her family.

My mom’s second time crossing the border was around 1990 or 1991. It was harder for her to cross because the border was heavily patrolled and she was crossing alone. By that time my mom already had two of my older sisters (toddlers then), so they crossed legally with her husband who had papers as well. While they flew into California my mom had to illegally cross the border once again. Just as she and the other immigrants were about to cross the border, patrol saw them so they had to go into a nearby lake to get away. The lake went up to my mom’s waist so she held up her sweater to prevent it from getting wet. The border patrol thought she was holding a baby and she recalls them yelling, “Señora salte de alli se te va enfermar ese bebé!” demanding that she get out before her “baby” got sick. They made it through to the other side of the lake and found an abandoned trailer to hide in. The trailer had no food, no restroom, no running water, and they were all in wet clothes. They left the cabin when it was dark out so they would not be seen crossing the border. They had gone from five in the morning to eleven o’clock at night without eating or using the restroom. After crossing the border my mom made it to San Ysidro where she spent four days living in a house with 70 people before making it to Los Angeles. The house had three rooms with blankets and pillows all over the floor and they ate eggs for almost every meal.

Today my mom has her papers and we live in Sunnyvale, Ca. She still misses home at times but at least gets to visit every year for the holidays or special occasions. My mom’s plan coming here was to work and make enough money to build a house in Mexico where she can retire. Now that she’s finally built her dream house, she is happy she has somewhere to stay when she visits but is no longer sure if she’d like to retire there after all. She has adjusted to her life here and is happy.

This story was written based on an interview of Rosaura by her daughter, Roxana Flores, a student at Eastside College Prep in East Palo Alto, CA.