Big Dream From a Little Village 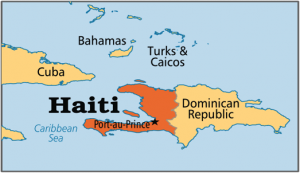 Having a big dream is hard for anyone especially when you are living in a poor hopeless place and where you would have to end up leaving your family and the place you were born. Living in Haiti was hard. It was scary. It was very dangerous. Anyone can die or get robbed or get hurt by the environment in that little country. We lived in a little house in a town. We spoke French. The reason why was because in the past we were enslaved by the French. My grandparents were enslaved by them they were treated really bad but never ran away. I never knew why.

We were poor as well and there were like three families living in that one little house. It was just so hard to live there and very packed. I shared a room with three other girls. But growing up I was happy. We were a big happy family and I went to school and got a high school education and after that my dream started to become a reality. 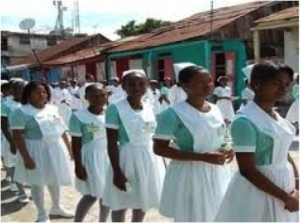 I wanted to be a infirmière – which means nurse in French. I was able to become a nurse in Haiti when I was around 17 and at the time I was working in hospitals throughout the island. I would take care of everyone and I loved being a big helper in the community. It made my day knowing I just helped a whole bunch of people and as I got older the younger people in the community would call me Maman Lolo. Maman means momma or mom.

The reason why I left was because I had a dream to become a nurse in America . I had a husband who was a doctor as well. So we decided leave Haiti and to go live in America to have a better future and to have a family in a “bon, sympa, sûr endroit” which means good, nice, safe place. I also want them to have dreams that can become true.

I came to America by airplane, the year was 1957. Upon my arrival, my first stop was Philadelphia where I didn’t get to be a nurse that quick like I hoped. I had to go to college. I went to a community college because I couldn’t afford to go to a big college but my husband started work right away and he was able to get me into the medical career also know as my dream. I began my nursing duties at a hospital known as Mercy Douglass Hospital. I also had two strong and handsome sons name Patrick and Hubert. Patrick was born in Philly but Hubert was born in Haiti when I decided to go back to Haiti for a while. I had to leave him there for 3 years because I was still kind of poor. But he came back the next year.

When I was in my 40’s my husband died. It was just me and my two boys and we would end up living a good life but we had our ups and downs. We stayed together and stuck it through. We were fort which means strong in French. Know it is just me and my son Patrick. My other son died in Haiti. He had an explosive stomach but now I live with my oldest.

Momma Lolo’s accomplishments include her nursing career in hospitals for many years. Her specialty was nursing elders throughout the Pennsylvania and New Jersey area. She would administer medicine to the terminally ill, provide first-hand nursing services for patients with cancer, and provide nursing care to patients with other life-threatening conditions. And also have a lovey family and be the great grand mother of two kids. She is 96 years old.

This story was written by Hakeem Musawwir, after interviewing his stepfather’s mother. Hakeem is a high school student near Palo Alto, CA.