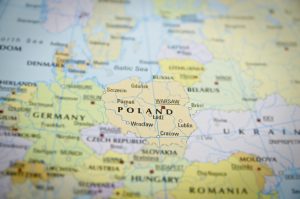 I moved to America for better opportunities in science and research. I was thirty four years old and only knew basic English words. In Poland, I learned how to read in English, but not speak and make conversations. I came to America from Poland for my job as a scientist. I was originally supposed to stay for three months for research, an experiment I was doing at Ohio State University. Three months turned into six and six months turned into a year. I left my daughter and wife in Poland and experimented being an “American.” I lived in a small apartment in the suburbs of Columbus.

I worked and grew up in Poland. I loved my job and wanted to pursue my love of science and research in America. I felt that there are more opportunities for me in America. In Poland, I was teaching science to college students ninety percent of the time and research the rest. Researching was way more interesting to me. I also loved traveling and experiencing new places and cultures.

My daughter was four at the time. She didn’t quite understand what was going on. When we landed in Ohio I surprised my wife with a new car. It was a 2002 Honda Civic. We drove to my apartment in the new car, my daughter sitting in the back, amazed with the clean leather seats, which would later be trashed by her. When we got to the apartment I gave a tour of the small one bedroom apartment. I gave my room to my daughter, my wife and I slept on the couch. That couch was the same couch we sat on and watched the news on. This is how I learned some of my English.

I watched the news with subtitles and copied what the people on the t.v. said. My boss was also very helpful with the process of learning English. He would give me tasks like phone calls with other scientists that would require hours of conversations in English. This sped up the process of learning. I am very grateful to my boss, because I would not have learned as quickly without him.

I made several friends from working at Ohio State University. Everyone was open and some even were in the same situation I was in. There was a couple from India, some people from Ethiopia, Russia and even Poland. I am, to this day (eleven years later), still in contact with some of the people I met in Ohio. Most have moved from Ohio to different states or even back to their home countries. One friend in particular , the family from Poland, my family and I continue to visit in Ohio when we are around the area.

Moving to America was a little shocking. When I thought of America I thought of big cities, like New York. I was later surprised to see there was more to see. The nature and landscapes were stunning. I was also shocked by the lifestyle of most Americans. In Poland, everyone would walk from place to place or take a bus, if it was necessary. In Ohio, I walked from home to work. It took twenty minutes. I would get honked at while walking, because it was so “weird.”

People that lived in the same apartments would the a bus or drive to work instead of walking. I did not want to be lazy and drive. It was also a great waste of gas and money. Most Americans also prefer sitting around and watching t.v. on the weekends instead of moving around and hiking or just walking around in the city. I was most surprised by how (mostly in the south) people don’t hike or make an effort to see what kind of beautiful places are surrounding them. The west coast is different, because there are many people from different countries, especially in California.

My first impression on Americans was extremely open. Americans were extremely kind to me and really helped with my adjusting to America. Most people were very curious about the Polish culture, lifestyle, and history. I was always happy to share.

As I was expanding my English vocabulary I was also expanding my interest in finding new jobs and places to live. My job required us to move. Like most scientist I had to follow the funding. I went to universities that could fund research. After three years of moving to Ohio, my family and I moved to Atlanta Georgia.

We had a very nice time in Georgia. Moving to Georgia was a very important part of my life, because this is around the time I started to get into running. There were a lot of Polish people that we connected with and met with very often. After three years of living in Georgia we moved to Tennessee. Tennessee is where I found my love for trail running. I was working at Vanderbilt University. Tennessee was a little more different than Georgia and Ohio, not as many immigrants reside in the south. Immigrants were so uncommon that I was once stopped by an officer in Tennessee and the officer wrote that I was Mexican because of my black hair and accent.

As I worked in Science at Vanderbilt, I ran everyday for as long as six hours at a time on weekdays after work. Around this time, I would create homemade gels out of potatoes and fruit that were all natural and did not hurt my stomach while running. I started putting these gels into plastic baggies and sharing them with my friends. Everyone loved it!

I pitched this idea to one of my good friends, Adam, who is also Polish. He was a graphic designer and soon became my business partner. An all natural running gel, it was one thing that needed to be on the market. We started working on a brand, names we would like our gel to be named. After weeks of thinking we came up with Lion or Spring. Spring won in the end and so the company was born. Throughout the next five years I would work at Spring and Vanderbilt and move to Stanford and back to Vanderbilt.

Running and creating Spring helped me meet so many new people. My family and I started to become more American. We stopped celebrating some Polish holidays and, in Tennessee, it was extremely hard to find Polish foods and people. People in America helped me so much by being open to help. Every state that I have lived in I have found so many people willing to help with whatever goal I wanted to accomplish. In this way I was able to start and run a company of my dreams.

This story is based on an interview by Maja Nazarewicz, a student at Palo Alto High School.