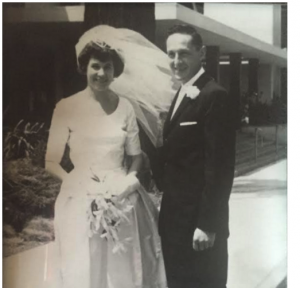 The world outside Sarnen called me to explore it; I boldly responded with a three year trip to France and then London, where I was a nanny to wealthy families.

It was 1960. While hiking on the magnificent mountains my home town was visible, pleasantly placed near a lake that glistened like glass in the afternoon sun. You could hear the children shrieking with excitement while swimming and playing. The mountaintops were invisible, consumed by a blanket of clouds that normally covered the sky with snow peaking out from under the dense cover. I was the youngest child and only daughter of my parents, living in Sarnen, Switzerland. I had curious brown eyes and short dark hair, the same as my three brothers.

My family lived in a small town of 9,000 people called Sarnen in Switzerland. We were a traditional Swiss family with wholesome values. My father had his own business designing and producing exquisite, well-made furniture. I loved to listen to my father play the cello in his occasional spare time. I had many hard working friends in Sarnen. There was always a play or concert taking place, some of which I was in. I often helped family friends by babysitting their children. My weekdays were always filled with long work hours, while my weekends were spent hiking, swimming, or skiing. Having limited income, my family and I could only participate in activities that did not cost extra. 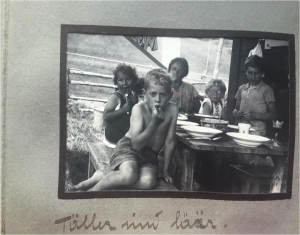 Beatley at age 5 with her brothers.

The world outside Sarnen called me to explore it; I boldly responded with a three year trip to France and then London, where I was a nanny to wealthy families. This is when I began to read and hear about America. I read all about the weather and the scenery, which instilled a longing to go and visit. But how could I afford a trip abroad?

At twenty-three years old I had returned to Switzerland and was employed in a jewelry shop, where there were mostly extravagant American customers. Having dreamed of going to America I was easily persuaded by the tourists to follow my dream. One of the things that attracted me to America was the climate. In switzerland it was always raining, snowing, or overcast, and I had heard that in California it was blue skies and fair weather all the time. In order to afford the lengthy trip to America I had to save all my earnings, which when accomplished made me feel very satisfied.

When I finally acquired enough money, I left Switzerland at the age of twenty-five. I waved “Auf Wiedersehen” to my parents, who stayed behind, since they had a good life, did not want to leave their home, and did not have the same sense of adventure as I did. However they did come to visit me while I was there. They were not pleased that I was leaving, and they hoped I would return.

Excited to finally explore America, I took a train to Paris with one of my friends, Margrit, who was traveling to America stay with family. It only took one night to get to Paris, and was great fun. Next we took another train to a town called Galais. Here we spent about two hours, though we did not have the chance to explore anything. Lastly we boarded a boat leaving for New York. The ride was long, scary, and rough because of a terrifying storm that followed us the whole way. All along the way we met more Swiss people and made new friends.

Noticing many big cars when I first arrived, which I had never seen before, gave me the feeling of being lost in that enormous city, especially coming from a small town. While in New York I went sightseeing with Margrit and her cousin. After two days and two nights in New York, Margrit and I departed on a large bus that drove all the way across the US from New York to California. We made various stops along the way, visiting many exciting and interesting natural and man-made things, such as natural structures, museums, and old towns. In the end the bus ride took about two weeks.

Now in San Francisco I acquired a job as a nanny where I was employed for a year and a half. My second job in America was in San Francisco in a jewelry store named Granite Brothers. I was later introduced to Louis, who is now my husband, by a friend at the local Swiss club. Louis was also an immigrant from Switzerland. We fell madly in love, which upset my plans of returning to Switzerland. When my parents heard of my new plans they were strongly disappointed. So much so, that they paid for a ticket for me to return to Europe. They thought that I would forget about Louis and stay in Switzerland. But instead I returned to California to be married to Louis.

After we were married we opened a ski shop. But the story behind this adventure is one filled with life lessons. Louis had always wanted to be self-employed. A friend of ours had the idea to open a ski shop, and offered for us to be partners. Louis and I gave all of our life savings to him, and trusted him to find a location and procure inventory. After a significant amount of time in which we did not hear from him we contacted him to inquire about his progress. Unfortunately, we discovered he had spent our hard earned savings on a new car and paying off his debts. We never recovered that money. Eventually we decided that we were capable of running a ski shop on our own. We were proud and delighted when we secured a loan, opened our own shop, and realized our goal of being self-employed.

I am now an American citizen and even though I always thought I would return to Europe, I am happy and content with my life; an interesting and exciting life at that. Now I wish for only one thing, that my husband gets healthier. I want to spend the rest of my life enjoying peace with my husband and family. I am thankful that I was given the chance to venture to America, own a ski shop with Louis, and raise a family with him. I am happy to be in America because this is where my home and my family are. I am grateful for the freedom I have in America, and I love the mild climate. My life has been an adventure I will never forget!

This story of Beatley was written by her grandson Thomas Buehlmann, a 9th grader in Redwood City, CA.