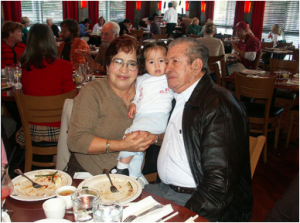 Soledad is on the left, I am in the middle, and my grandpa (the person telling the story) is on the right

as read by Ramon’s granddaughter, Jamie Garcia-Villareal, a resident of Palo Alto.

I wouldn’t say I had it easy, but then again, no one here really did. I was born and raised in Aguililla, Michoacan, Mexico on July 20, 1929. You see, growing up then, no one really had any money. Michoacan was filled with families living in poverty, as well as a lot of orphans. As for me, I was part of the population of kids who grew up without a parent. In 1929, the year the Cristero War broke down over the Catholic church, I had lost my father. Many kids grew up fatherless, just like me, due to the war. Those who survived the war and had met my father would tell me countless stories of the terrible, yet intriguing memories they had of fighting along my father. One story shared with me, was of the time my father had lost his arm and still managed to load his gun and fire with one hand. I had always wondered what life could’ve been like if only he had still been around.

Not only was this hard on me, but it was even harder on my mother, Maclovia, as well as my two older sisters. Growing up, my mother had always made her authority clear. She was very strict and firm with me, some would call it tough love. Trying to raise three kids as a single mother while living in poverty was hard enough, as well as trying to be a mother and father figure to your kids all at once. Due to the fact that we barely had any money, I wasn’t able to afford making it past the third grade. Back then, only those who could afford food on their plate while still having enough money for an education could go to school. For my family, having a full stomach and managing to keep some money in our pockets was more important.

As time went by, I spent my teenage years working at a bakery to help support my family. I helped prepare the flour as well as cleaning and other small jobs. During my free time, I would play baseball with the kids from el pueblo, the village, although, that wasn’t too often. I fell into the same routine in my adolescent years of waking up en la madrugada, early in the morning, at around 3:30 am to work at the bakery and selling the sweets we made to the people in the streets, this ended until around 2pm, when I would home to help my mother out. I didn’t really have much free time.

I was invited to a party one weekend, and little did I know I would end up meeting my future wife. I instantly fell in love with her, some may call it love at first sight. We were young, but I loved her so much I knew I had to marry her. My Soledad; She had the most beautiful light brown eyes, and dark brown wavy hair. She too had lost her father in the war, and had lost her mother while giving birth to her younger sister. Even though we were around 18 at the time, her Godmother, who had custody of her, was a strict woman with many boundaries. With this in mind, our communication was limited to love letters that were delivered to me and her by one of Soledad’s friends.

After all the letters, Soledad and I came to the conclusion that we wanted to get married without anyone knowing, especially her godmother, so we eloped. After years of being happily married to the woman I deeply loved, we started a family. First came Hector, and next thing you know, we had brought four more precious kids into the world; Bulmaro, Ana, Sergio and Jaime. Unfortunately, it wouldn’t stay that number for long. My second youngest, Sergio, got sick with Fiebre Tifoidea; Typhoid fever. At the time, there were barely any antibiotics and we didn’t have much money, so Sergio’s fragile body could not take it and passed away leaving us as a family of six.

I felt that as the head of the household, it was my duty to do something, I couldn’t let my family suffer any longer. I only had one option, the one place I could turn to; America.

One of my cousins who looked like me let me borrow a pass of his so I could come to the US. I found a driver who was willing to drive me as well as others trying to cross, and spent hours in a van on my way to California. The first couple months in California were hard, I missed the authentic, flavor of mexican food. Every English word I heard sounded like gibberish, and I terribly missed my precious kids and wife. As hard it was for me to leave, I knew it was for the better. My kids handled it well, because they knew it meant new toys, clothes on their back and shoes on their feet.

I got my first job picking apples in the crops near Santa Rosa, CA from sunrise to sundown and each day I was paid differently; they would pay me based on how many boxes of apples I had picked, and it was very little. My first impression of Americans was not great. I expected people to welcome me with open arms, but instead I was welcomed with pure ignorance and racism. I would see signs out of restaurants saying, Se proíbe las entradas a los morenos y los mexicanos, entrance to blacks and Mexicans are prohibited. This new life was extremely difficult, I remember one day while picking apples my co-workers screaming ¡La migra!, as they ran. I had to wear stilts in order to pick the crops, so I was not able to run. I didn’t even have time to take them off, so I hoped for the best.

Even though I barely knew a drop of English, when I was approached and was told, “sir, your papers?”, I automatically knew what they meant and pulled out a random piece of paper from my pocket in hopes of tricking them. In a way I was privileged when I came to America. I was blessed with bright blue eyes, darkish blonde hair and very fair skin. Therefore, because of my “American” looking appearance, the immigration officer nodded, gave me a warm smile, and said, “Don’t worry sir, you’re all good”. I didn’t look like an “illegal Mexican” to them.

America was a confusing place, I continued sending money to my family, but I knew I wanted more than to be poorly paid for loads of hard physical labor. I decided to rely on the one thing that I was good at and grew up with all my life-working in a bakery. At the bakery, I was able to earn more money making bread, selling it, and cleaning up. My kids were much older then, they were adolescents and young adults. At this point, I was able to bring my wife and kids to the United States and start a life here. Not all my kids made it to the Bay Area at once. They all came one by one once they found a partner and got married. After my family all came to the US, we all settled down here and started over. I don’t really remember much after that. I retired because my family could maintain themselves and my grandkids, which are too many to name.

Unlike many grandparents, I was never able to have the privilege of retelling my story and life-lessons to my grandchildren. I was diagnosed with Alzheimer’s at the age of 81, although, I showed the symptoms years before, My memory was still greatly affected. When I began to realize I was losing my memory, I distinctly remember writing a letter to my wife and hid it in our house, but I had never told her about it. I wrote something along the lines of, Querida viejilla (this is what I used to call her), perdoname por haberte ignorado casi toda una vida, siento que fui muy joven para casarme, as well as many heartfelt and personal things. I told her, Guarda estas palabras en tu corazón, (Dear woman, forgive me for ignoring you for almost a lifetime, I feel as though I was too young to have married someone… Save these words in your heart). I do not regret any of my actions, and am grateful I got to see most of my grandkids and kids flourish to the people they are, though sometimes I forget their names, even though I don’t mean to. My disease got worse once my last grandchild was born in 2002. Everything after that seems like a blur, I began feeling guilty for forgetting basic things such as my grandkids’ names. My heart knew it, but my brain and mouth could not catch up. 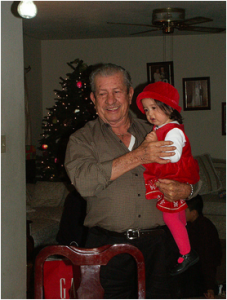 My grandpa holding me, his youngest grandchild

Throughout my whole journey, I had always tried to become what I believed the best father I could be to my kids, although it was hard trying to teach something I never had, but this encouraged me to become the best father I could be. I will forever be grateful for the hardships and experiences I had to go through that helped shape myself as well as my family. As for the rest of my story… I don’t quite remember…..

This story was written by the granddaughter of Ramón Garcia. Jamie Garcia is a student in Palo Alto, CA.