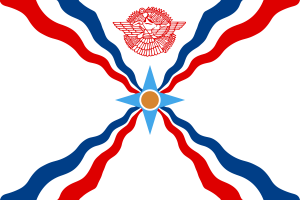 Editor’s note:  Click to read more about the Assyrian Diaspora and resettlement in countries like Iraq. Click here to watch another Assyrian-Iraqi whose family also immigrated to the US – tell her story.

Why did you or your family move TO America?

a. We moved to America because of the better opportunities for us, and the substantially better education system. My father had lived in America for a while and after comparing the US and Iraq – decided to move, but while he had been in New York we decided as a family to go to California. We did this because through facebook our mother had made many friends from California, and they told us about how welcoming of a place it was.

Did you experience any hardships when coming here?

In short, no. However I was honestly scared for my life at first. We were constantly worried prior to the move, and for about the first year in the US – that we would be scorned because of 9/11. For a while I had thought that people never intended to bring it up to me because I don’t look exactly middle eastern, being a mix between Sudai (Assyrian) and Italian. It took me a while to realize that the people around me just weren’t bothered by it. I had thought that I would face either group discontent as a whole, or that select people would be angry with me for it because of who I am.

What about America did you know of prior to moving?

What do you miss about your hometown/country?

The city was smaller therefore it was easier to connect with our neighbors making it feel more like a community. Since the middle east has a lot of unique cultures and ethnicities it was easy to find people with the same ethnicity but at the same time ethnicity didn’t matter because it was so diverse. In all of my time in America I have only met 5 people outside of my family that were Sudai (Assyrian).

5. Do you regret moving here why or why not?

I don’t’ regret moving here at all, because of the opportunities that are here. Had I stayed in the middle east with my experiences and who my parents are I would most likely have to be a butcher for my whole life. My family does not have roots there anymore, and being a butcher is the easiest profession to start there. When walking to school you could see cows being butchered in the streets.

Did you find it difficult to learn english prior to immigrating?

Not at all, actually. I had learned some English at the same time as I was learning Sudai before even coming to America. Both of my parents are fluent, save for some pronunciation problems. It feels like English is speaking with my tongueand Sudai is speaking more with my throat. It was because of this that I foundFrench to be an easy language to pick up for my high school credits because of how similar the words were formed. And to top it off, when I came to America – for a long time all I would do was read books by myself. To be honest, I think I am more fluent in English than Sudai. English also turned out to be my best subject here in America.

How were the cultural norms from your home different from America’s?

This is a bit difficult for me to say, since I was quite young when we moved. I hadn’t really had an understanding of culture as a whole until about my junior year of high school. From what I can remember, it hadn’t actually been all that different. The school I attended when I moved to America actually had a very similar layout to my old one too, and that had me quite confused for a while.

How did you cope with the sudden change?

At first I had a hard time, so I would go to the library every day and just read while time slipped by. Eventually however, this small group of three friends pulledme aside at school and would talk to me despite the fact that I could only offer half sentences and broken English at the time when compared to them. I deeply wanted to talk to these people better because of how kind they were to me and this pushed me to learn English with a new passion.

To be honest for me they were very similar. If anything life was harder in Baghdad than here. Since I didn’t really have anything to do while I was so young my life was mostly aimlessly wandering around while walking to and from school. However after moving my father became an investigator for a company dealing in fires. Because this is better paying than his security job back in Baghdad life has been much easier.

Do you think having siblings helped you cope with moving? If possible can you emphasize why or why not?

Having family you are close to makes everything easier. I was never able to go to school with my brothers because me and my next oldest have a four and a half year gap between us in age but they met many people, both students and teachers that knew I was coming and received me very warmly. I was actually baffled at how many teachers in high school recognized me because of my brothers and they were all very kind to me.

Matthew A. Berasley was interviewed by Karen Pompa.