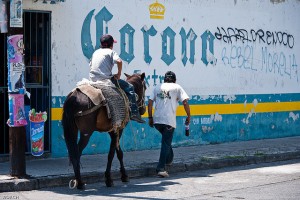 One thing that I have always hoped for is for my kids to have an education and to be someone in life, and to be known.

During the time I was in Mexico I lived in a place called Morelia. I lived in a regular house that my dad made, but we still needed money to get food. I worked in the fields. I also worked on construction with only a few people. I had to work everyday to survive because life is hard in Mexico. I didn’t have the time to go to school while being in Mexico. I had to do whatever I can in order to get money.

I decided to leave because I wanted to explore and make my life better, such as moving to the U.S. In the United States there is more chance of being successful here than in Mexico. I sort of hated life there in Mexico because there was no future for me there. I had nothing to do there but suffer trying to keep myself alive.

Then one day I packed my stuff and left. It took me about 5 days because I had to come to the United States by foot. The way I did it was by paying a guy to guide me along the way. My feet were killing me on the way there. While there was daylight it was very hot because I was crossing the desert in order to get here. But the nights were ice cold luckily I had a jacket with me that a lady gave me. I remember walking on the sand, rocks, and dirt. I also tried to avoid many deadly scorpions.

Some people did not make it all the way because they were so exhausted. I remember one of those people was a lady. I remember how she suddenly fainted. It was also the lady that gave me the jacket for the night. I came here with a few of my friends that also wanted to have a better life. Once we got here we all went our separate ways. Each of my friends had some family here while I didn’t. Also I realized that nothing got in the way while I was on the way to United States. It actually went smoother than I thought because it was easy to cross the border.

I came here at the age of 15. The first thing I did was try to get a job, but nobody wanted to give me a job, so it took me a while. Eventually, I got a job working with a man as a gardener. That’s what I did until I was 18 years old. I first lived in a place called Dos Palos, in California. I lived there for one year.

Then I realized that one of my older brothers came to the United States also and was living in Redwood City which was only 3 hours away. Now I live in Redwood City where I have lived for most of my entire life. It was very hard when I came here because I had to find a job when I wasn’t even old enough. I also had to find a new place to live with no money. Also being 15 in Mexico kind of means that you should be working and have your own place to live. Because as you know there wasn’t as much rules there. I mainly came here as soon as I can go by myself to try to get a better life. I also didn’t think it through because I was young and dumb.

Now I live in Redwood City with my wife, 2 sons and 2 daughters. One thing that I have always hoped for is for my kids to have an education and to be someone in life, and to be known.

This interview was conducted by Raul Padilla Salinas of his father. Raul is a 9th grader in Redwood City, CA.