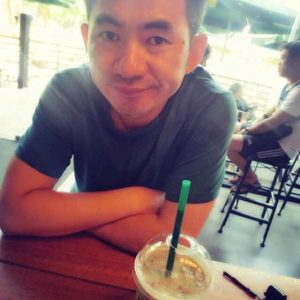 My father Yun Nie was Chinese; I used “was” because he just got his green card in the last month. Now he has his green card, so he is a part of United States. He was born in China in March 27, 1973. Now he is 45 years old and going to turn 46 this month. Why does he love America so much? Let’s talk more deeply about him, shall we?

Back in China, he was a guy that worked really hard every day. Every time my brother and I went his house, he would always be lying on his bed; I thought he was just being lazy and didn’t want to do anything. But once he brought us to his workplace, I was shocked. He managed people really well and worked really hard on his own things. He was a guy that had many jobs and worked hard on all of them. He got a nice pay but he thought it was not enough, because he wanted save money to pay for our college and to support the things that we wanted to do in America. He thought his life in China was really easy, and keeping it up was really easy as well, but he felt it was not enough for him. He wanted to go to a better place like America. And he had two brothers, our uncles. My father wanted us to take the Civil Service Exam and bring my two uncles here. My father’s father, my grandfather, had already immigrated to Canada so he was too not to worried about him.

He visited America many times before immigrating. Whenever he came back from America, he’d tell my brother and I how nice America was and how he loved it. As what he told me, his biggest point for immigrating to America was for my brother’s and my education. When we were in China, he always telling my twin brother and I, “You guys must be 100% ready and proud of yourself! You guys will be the first Americans for Nie family!” Well that is what he said 3 years ago, now it is more like “I know you guys worked really hard but it is not enough, it is America, a place that has the best education, you guys must get in a very nice college…” Since it is time to take the SAT and go find a college for a better future life. And I think the second thing he always like to tell us is how beautiful America is; he always say things like: “America’s foods are so clean and fresh, the surroundings of America is really good, you can see it in San Francisco, Chinatown is always messy, but another place of the San Francisco is really clean.” He is not just saying, he loves travel to many places such as New York, San Francisco, Chicago and Las Vegas. Even though he is not a guy that speaks very nicely, he always likes to tell us and bring us to places he went before.

For now, he lives in Sacramento. He thinks there it is really beautiful and peaceful, and houses are cheaper than in Fremont. Shopping places are very united and people are very friendly… At first, he wanted to live with us, but there was not enough room for 3 people, and he thought my little sister with him would distract my brother and I from studying. And he thought Sacramento doesn’t have as nice of schools as Fremont does, so he didn’t make us live with him. Now he thinks he is very happy there. Even he can’t speak too much English, he still finds ways to talk with other people. He loves the place he lives now, and people around him.

The story of Yun Nie was recorded by his son, Jiafu Nie.