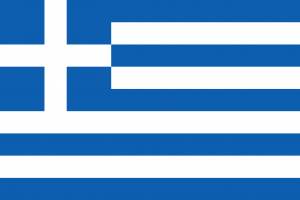 This is a picture of the flag of Greece, where my grandmother was born and raised until the age of 13. Creative Commons Image

What if I told you that a young girl, living in a family of ten in northern Greece, would find her way to Palo Alto, California, married to a New Yorker with a daughter and two loving grandsons? My grandmother, Amy Lewnes, was born on November 30th, 1933 in a small town in northern Greece called Serres. She lived with her father, her mother, her brother, her grandparents, and her aunt and uncle. Her family was quite successful and accomplished; they were the richest family in all of Serres. However, when my mother was very little, she moved from Serres to another town called Salonika. There, she was placed into an all girls private school at the age of six. My grandmother was a very happy child, she had many friends who she played with in and around her home. She and her brother however did not have a very great relationship; she was constantly bullied and picked on by him and his friends. Despite this, my grandmother loved Greece and had a wonderful youth there.

As she grew older, her family dynamic took an unexpected turn. Her father, who had lived in America prior to her birth and had actually fought for the U.S. in WWII, had gained U.S. citizenship in the mid-1920’s and was preparing for a move back to the states. In around 1940, my grandmother’s father left Greece to make a name for himself back in the U.S. This devastated my grandmother; she felt abandoned, neglected, lost. But life had to go on; she continued to work hard in school and took a liking to science specifically. She was regarded as one of the brightest children in her entire school. However, nothing prepared my grandmother for what was to come.

WWII ravaged through Europe in the late 1930’s and early 1940’s and devastated millions of people. Greece had been relatively unscaved until after WWII, when Greece was hit hard by economic and social struggles. Communism was spreading throughout Greece and my grandmother’s family was unsettled by this. In 1946, my grandmother’s family decided to move across the Atlantic Ocean to New York City in search of a more stable place to live. My grandmother’s father, who had been living in the U.S. for the past 5 years or so, found a loophole in immigration laws that allowed for my grandmother, her brother, and her mother to make the journey to the U.S. The journey itself was fairly simple, they boarded a military cargo ship, which was set up by her father to escort them safely to New York, and took a two-week journey across the Atlantic. When they arrived in New York, their documents had already been cleared and they were prepared for their new lives.

Life in New York was very different from Salonika, but my grandmother stated that the transition was “seamless.” Her father had bought a small apartment on 47th street in the upper floor of a hotel. My grandmother was not used to such closed quarters; her home in Salonika was very spacious with enough room for ten people to live comfortably; her new home struggled to fit four. The language barrier was not difficult for my grandmother to overcome. In her school in Salonika, she had learned to speak a little bit of English; it took her only about a year in America to learn English. Adapting to school was not very difficult for her either, she was placed into a private mixed school, and gained many new friends very quickly. The thing my grandmother struggled with most in America was leaving her family and friends behind in Greece. Previously, she had been living with her grandparents, and her aunt and uncle. Unfortunately, they were unable to accompany her immediate family in their journey to the U.S. She also left behind many friends who were so dear to her. Eventually, she would look past her old life and start an all new life in America.

As she grew older, she grew out of her Greek culture and adapted American culture as her own. She graduated high school as an excellent student and enrolled at Hunter College for women in New York City. She worked extremely hard throughout college, studying biology and microbiology, and was able to get a job as a medical research technician at Columbia University right after graduating. In 1954, my grandmother met her husband to be, Jim Lewnes, and married four years later in 1958. In 1961, my mother was born in New York. The three of them lived in New York until 1989, when they moved across the country to San Francisco. After a short stint in San Francisco, my grandparents and my mother moved to Palo Alto in 1997, and they have never looked back.

This story was written by the immigrant’s grandson, a student in Palo Alto.