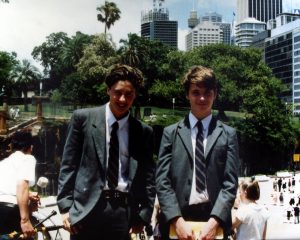 This story is based on the real life of Kris Duggan. He immigrated from Australia to the United States in 1976 and again in 1989.

I was born two years before we left our home in Sydney to move to the unknown, Houston, Texas, USA. In Houston, life was like a TV show. Everything seemed as if we were in a sitcom where everything seemed right and in place.

The only thing that seemed out of place were my parents. My mother, of Ukrainian and Bulgarian descent, had skin the color of dirt that was saggy and cold. She would wear tall heels to look down upon my sister and I until we shot past her meer 5’5” stature. Yet her frail, old body somehow was able to engage in activities that were physically demanding such as golf, tennis, and gardening, and still be able to do them again the next day. But she was dumb as a doornail. She could not write or solve an equation to save her life. My father, of Australian descent, was almost the complete opposite of mum. His skin shimmered like soap suds in a bathtub, and the beige plaid suits he always wore made his long legs even longer and caused his torso to extend. He could not do any physical activity without tearing, fracturing, or breaking a part of his lengthy frame. But, it felt as if he knew everything. His work was so intellectually demanding, which proved his value and importance to his superiors. I did not really understand what my father did for work, but I knew it had to do with cities around the world. He was a chemist who graduated from the University of New South Wales, Sydney. I despised my parent’s carelessness around parenting. This was the largest cause for my anger and frustration towards them. But, I unconditionally loved them, no matter how mean or oblivious they were to my needs as a child.

I looked different from all the natural born American kids. Because of my parents’ backgrounds from Eastern Europe and Australia, this made my appearance very unique. My face had an awkward shape, circular and not symmetrical. My facial features were abnormal; my nose was lumpy and got worse with the fights I got myself into in grade school. Becoming a teenage boy, made my appearance even worse, because of puberty. My face was like sandpaper, gritty and dark. My clothes were either too baggy or too tight. Because of this, I stuck out like a sore thumb in Houston. Even by the way I walked, I was scrutinized. Being a minority was agitating, the feeling of antsiness and nervousness ran through my veins and stunned me whenever I was in public. I thought to myself I wish I could just be one of them. It caused my blood to boil with simultaneous envy of my peers, and hatred of my parents. Standing out made me a target at school.

The year was 1985, it was a blazing summer in Texas. The rays of heat beat down on anyone in the sun’s view, making red necks redder, causing me to look sunburnt all year round. Seeing the bubbling skin after the hottest weekend in Houston history, we all looked the same. I was livid. Being the same for even just a short time was wonderful.

After my 13th birthday, on July 10th, summer was still going strong. I was in my room, constructing model cars, my favorite hobby when I was 13 when my parents walk in. “Kristoffer…” my mother hums.

“Yes, mother?” I replied hesitantly because whenever my mother calls me in a hum, it means no good.

“Your father and I have something life-changing to tell you,”

What could it be? I wondered.

“We are moving back to Sydney! Isn’t this great! We get to go back home, live with your cousins, Adam and Simon!” She said in a high pitched tone. I thought my life had come to a complete stop. I have to leave all of my lifelong friends forever and never see them again. I cried as my mother and father left my room. After living in Houston for so long I felt as if I had become a Houstonian. I felt I had a special connection to Houston. I had never thought of Sydney as my home. Becoming Americanized made me feel as if I was apart of the community. I could see why my parents wanted to return to Sydney. They had built their connection to Australia already. They had friends, family, and a community. But I was barely able to walk when they made the decision to move to Houston. I had no connection to the land, other than the fact that I was born there.

In Sydney, I did not belong. I had become so Americanized, that again, I stuck out. Every day I took the ferry to school, going through Circular Quay. Thousands if not millions of people took to the inlet of the Quay to get to work, school, and many other appointments. “Busy as a Beehive,” my mother used to say, mocking society for being crowded.

Later in that year, I overheard my dad talking in the other room. I heard him say, “Sydney is dried up. We don’t need you to be here. America is where all the profit is.”

I knew this wasn’t good. I had just started getting used to my life as an Aussie. Life started to work for me because I was surrounded by people somewhat like me. My Houstonian accent had disappeared, and my Aussie accent returned. In my life, I have always felt uneasiness because of the frequency of moving around. When I was younger, I had a fish tank. I had lots of fish and corals but every time we moved, the fish and coral would not survive the new climates. I am like those fish and coral. Being on the move ruins the constant things in life. For example, daily routines such as taking the ferry and walking through the loud, bustling Sydney harbour was way different from walking to school in the quiet suburbs in America.

The next thing I knew, we were on a plane for Los Angeles.

The 18 hour flight was exhausting, even when you sleep 10 hours of it. The rocking of the airplane, the beeping, buzzing, and random thuds made it feel like a jungle. But I dreaded landing. I would rather stay in the jungle of mechanical noises than to land.

Los Angeles was beautiful. Every building had glossy glass panes, reflective steel frames, and were a million stories high. As we drove past my soon-to-be high school, we noticed how dull the neighborhood was. Every house was just a copy of the last. A muddy shade of orange and brown tile roofs. It looked abandoned because there was nobody in the streets. I felt uneasy because Sydney was the complete opposite; noise, people, and liveliness surrounded you. Even in Houston, the city was full of life. I could not stand to live in the dull, boring, quiet suburbs of Southern California.

My first day of school was horrific. I walk into 1st period and get torn apart by the sharp laughs and shrieks of laughter. The students were bouncing off the walls. I heard, “Oi oi oi!!! Bloody Aussie, mate!” in a hissing accent. “Look at his shirt! Who wears a pink collared shirt to school?” I should not have let my mother go to the store and buy my clothes.

I could barely make it through the rest of my day. Last period. French. I expected more of the same. Hollering and howling at my shirt, my accent, my skin tone. Alas, there was no noise upon walking into the class. Only a few students and the teacher. I sat down and read the board which said “lire la page 76 du manuel” or read page 76 in the textbook. I started to read and when other student slipped into class after the bell rang, every seat was filled except the one next to me. Until a pretty blond girl came in. She was beautiful. Eyes the color of the sky, her hair was perfectly braided and almost gold tinted. She sat next to me.

I asked in my deep Australian accent, “What’s your name?” I could see her freaking out as if it were the beauty and the beast. Anticipating a horrible reaction, I braced myself.

At this moment, I knew that there was a life in Los Angeles where I was seen as normal. Without any humiliation, this new girl showed me that not everyone will judge you based on your ethnic background. I have traveled from Sydney to Houston, back to Sydney, and to Los Angeles and in all of those places, I chose to Americanize, or to Australianize. Now, being older I am able to make the decision without my parents influence about whether I want to Americanize again or maintain my culture. My decision was not black and white. I want to maintain my Australian heritage, for example, celebrate Australia Day, or Australian Independence day, January 26. But I also want to develop my American identity. I know I will go to University in America, get a job in America, and have kids in America. My future kids will be American, and it is my obligation to them, that maintaining your identity is the most important thing because it is all you have.

This story is based on an interview by Colin Duggan, a student at Palo Alto High School.