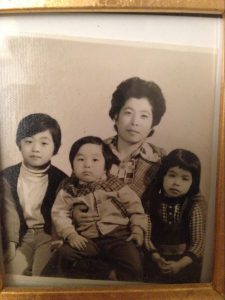 My mother (right) sights with her mother and two brothers.

My mother was born in Seoul, South Korea in 1968 and lived there for the first five years of her life. At the time of her childhood, South Korea was rather poor, only beginning to become a developed country. She took morning walks with her family: her parents, her older brother, and her younger brother. Her younger brother would be pushed by her mother while she and her older brother held her father’s hands. The air was fresh in the morning and the sky clear. They walked along the sidewalk by small stores and restaurants. There would always be street vendors, selling hot buns with meat inside that would melt in your mouth. Her parents would take them on these walks on weekends when they worked from home as teachers. They taught mathematics and history to middle-schoolers, often coming home with lots of papers to be graded. The two made enough money for a living and were satisfied with their lives, but wanted more for their children.

Her parents chose to move to the United States for better education for their children and better job opportunities for the whole family. Moving to the United States was something my grandparents dreamed about, being able to work hard and live successfully, with educated children who had families of their own. They saw no future or opportunity in Korea for themselves or their children. My grandparents believed that their children would be stuck on the same path their whole lives and could not determine their own future the way they could in America. My mother’s parents made sure to let their children know that they could achieve anything, as long as they had the opportunity.

At five years old, my mother’s family took a plane from Seoul to Honolulu. Before the flight, her parents were very nervous because they had three young kids with them. Throughout the 10 hour flight to Hawaii the parents had trouble relaxing because it was the first time the family traveled by plane and they were unsure of what would meet them in America. No problems arose during the plane flight and they entered the U.S. safely without any immigration difficulties. Although the flight was lengthy, my mother enjoyed the small packets of peanuts and the big chair. Another plane flight to San Francisco brought them closer to Hayward, where the family started off living with my mother’s uncle. Flying on a plane for the first time was an experience that my mother relished, especially when it was taking her to a completely new life.

When she first arrived in America, it was very difficult for her family to assimilate into the American culture. It was scary for them, not understanding anything that people said. The language barrier was definitely the biggest challenge for the whole family. Fortunately, the kids went to American schools and learned English there. My mother recalls her parents always asking, “What does that mean?” and “How do you say this?” in Korean. Not only was there a language barrier, but a major cultural difference as well. Things like food and social understanding made them feel like outsiders at first, but they soon accepted American culture. The family did not completely assimilate and traditional Korean meals were always served at dinner. The hot galbi, cooked vegetables, and rice were common in their household.

Not only was there a completely different culture and language, but the family moved without anything planned for them in the U.S. No jobs were lined up and they didn’t know anybody except my mother’s uncle, who had only lived in the U.S. for a little bit longer. Both of her parents worked tirelessly to provide for their family, first as food servers and then later as franchise owners of a 7-11. At the 7-11, they worked long-hour shifts to save money. My mother took an independent and caring role in the family for her siblings and herself. On a daily basis, my mother would help out around the house, organize her own schedule, and care for her brothers.

Over the years, the family has achieved many goals and completed their American dream. The parents became business owners, first owning a 7-11 franchise and later a Korean market and a few other properties. All three children went to college and are married with kids, and the whole family are financially successful. Since living in Hayward, my mother and her brothers have all moved to different cities in California, although their parents stayed. To this day, the unforgettable memory of their American journey is still fresh in their minds.