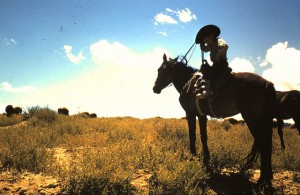 I am in, no, I was in México on my step-grandfather’s ranch, up in the trees picking all kinds of fruits, from mangos to guavas to plums. I could see the sun setting on the horizon and I saw the horses below me grazing with the cows.

I was born and raised on outskirts of México City. I would always visit my step-grandfather on his ranch during my summer vacations as a child. I would go horseback riding and milk the cows. Going to my to the ranch made me feel happy and I could remove myself from my daily routine. During the school year I was on my own.  Well I had my sister too, but we were always alone because our parents were constantly working. The neighbors were like our extended family, they took care of my sister and I. Then my grandmother started to live with us. She would take care of us….. she would cook, clean, and wash our clothes.

México was my home but when I had just turned twenty, my mom, two family friends, and I decided to look for a better life in America. Meaning we would be able to find better jobs, be economically stable, and to live the American Dream. Traveling to a new country wasn’t easy.

When we left we took a bus ride from México City to the U.S. Tijuana Border. Taking a bus wasn’t the shortest way to get to our stop. This trip took us five days to get to the border and the trip wasn’t very pleasant either, it was stuffy, crowded, tiring, and very uncomfortable. We made stops at almost every city along the way, so more and more people got shoved onto the bus while others got off there were still more people trying to get to our same location.

When we arrived at the U.S. Tijuana Border, and then we had to cross it. The people who were letting us cross were asking us many questions. They asked if we were going to need public assistance, housing, or medicare. All they wanted to know was if we going to be dependent on the U.S. government.

Then I saw it – America. The first thing I really saw was the land in front of the four of us, and our feet inching further and further away in every direction. I started to get overwhelmed….. overwhelmed with the fact that I was in a new country. There would be new opportunities, new responsibilities, and a new life ahead of me. It was a whole new world from my view. At first, after walking and we started to meet and see new people, I felt out of place, like I didn’t belong here, it felt strange, it felt like a place I didn’t know.

Could I make good decisions in this new country? What lays ahead?

There was a whole new language for me to learn. I was, no am self taught. I listened to music, the radio, watched tv shows, read newspapers, and magazines. It wasn’t the easiest thing to do because when I tried to communicate with others they couldn’t understand what I was saying even though I knew what I was saying. I ended up finding a job as a janitor in an office building. It might not have been the best job in the world but I was happy to have a job that helped me pay bills and that gave me a little extra to spend.

Now that I have a family and a supporting job, I can say that I’ve lived my American Dream. I currently live in Menlo Park and work as a chef in Palo Alto. From starting out living in another country to end up with a family that I love and a job I can rely on is something much bigger than what I started out with and I love my family and all of it so much.

Dasha, a 9th grader in Redwood City, conducted this interview with her father.