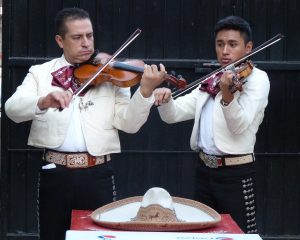 I, Maria Teresa Lucatero, left my home in search of a future better than what was to be ahead of me, all while I was struggling to find a way out of being alone.

I was born to a large family on September 3rd, 1959, with a total of 9 siblings, and my mother and father. My mother had a given birth to a total of 20 children, but the majority were miscarriages or early newborn deaths. My parents raised me in El Llano del Tigre, Nayarit, Mexico. My parents weren’t in the best of economic situations, but they made the best of it. My mother did not work and she took care of us at the house while my father worked as a musician, playing the violin. His work as a musician didn’t bring much income home, but we weren’t dead poor, we still had a roof over our heads, food in our stomachs and clothes on our backs. I remember walking into the living room and hearing my father playing the violin when I was a young child, the sound of his violin strings humming and vibrating made me feel the most happy in life. The sound of his violin strings vibrating still ring in my ears from time to time. I was enjoying life as a young little girl with my light blonde and hazelnut locks of hair and my light, paler skin.

My life was quickly turned around when my father died. He died of a liver problem on September 16th, 1968 when I was just 9 years old. I had to grow up at that moment. I remember my mother telling me, “No más cosas de niños,” No more kid stuff. I was to help my mother with maintaining the household and help her provide for a family of now 11. At the time of my father’s death, the majority of my siblings were still around in Nayarit. That all would change in the coming years. By the time I was 13, 5 of my siblings had already been living in the United States and it was only my brother and sisters now.

A short time after my 14th birthday in 1973, presumably in October or November, my brother came to me and asked if I would go with him to the United States permanently. I was shocked to hear this because I did not know the United States at all and I would be leaving behind a mother who only cared for me. My brother then sat me down with my mother and sisters and he told her what he wanted to do. He told my mother that he wanted to take me to California, to live with his family and give me a better life than what I was going to get here in Nayarit.

My mother began to cry and she told me, “Ve chica, ve a ver una vida que no te puedo brindar aquí,” Go child, go see a life that I cannot provide for you here. I began to cry, I embraced my mother and held her close to me as I told her, “Mama, yo no quiero ir. Quiero estar aquí con usted y mis hermanas,” Mama I don’t want to go. I want to be here with you and my sisters. She told me that this was the best for me and that all she ever wanted for me and my siblings was to live the life she never could. To this day, that moment has stuck with me as the memory of my mother’s greatest sacrifice. She sacrificed a life with her children in exchange for a better future in the United States without her by their side.

My sisters said that they would leave soon and that I should stay a little while longer. I refused, I wanted to leave now, I didn’t want to experience that pain I would feel when I would have to leave my mother and may not be able to see her ever again. All I want is to get away from here, so I don’t have to see mama cry anymore.

Finally the day came and my brother told me it was time to go. I grabbed the bag I packed and said my heartfelt goodbyes to my family. I hugged my sisters and told them,”Los veré pronto ¿no? Cuidate a mamá por favor, por mí” I’ll see you soon right? Take care of mom please, for me. I looked at my mother, with her beautiful eyes and soft, pale skin and gave her the biggest embrace I could. I told her how much I loved her and how much I would miss her, she said the same. Then we left. The journey was hard, but we made it to California. We arrived in East Palo Alto, California where my brother’s family was living at. The house wasn’t anything extravagant, but it was what I called home. I don’t remember what it looked like exactly, but it is still apart of my memory. It was a home big enough for us to live and sleep in, a home that kept me warm at night, a home that I could go to whenever I felt alone.

When we first arrived, I felt a sense of fear and joy at the same time. I was seeing America for the second time in my life, this time I was here to stay. I kept close to my brother as he led the way, I did not want to be seen by the white people living here. At the time, unbeknownst to me, the US was at war with a country named Vietnam. My first year there was my worst year yet. I had never been more ridiculed about how I talked or looked than when I first arrived to California. I had a very hard time adjusting to the diverse culture here in California being that there were so many Mexicans, especially in East Palo Alto. Despite the fact that there were people of my culture, I still felt alone. I had no one to relate to, no one to tell my story to, all I had was myself and my family. I wasn’t able to adjust to the culture here in California and to this day, I am still not able to adjust to the ever growing culture here.

The person who helped me most get through all of the hardships in both school and in life in East Palo Alto was my cousin, whom I will not name for privacy sake, and she was also the person who helped me adjust to life in California. She took me places to get me familiar with the area and with the bigger community of California. She took me to my first American restaurant where I got to experience the food here, I decided that I didn’t like it much but I was grateful for it. When my brother enrolled me in school at Ronald McNair, I felt really alone. I had no friends, no one to really help me know what was going on in class so I was constantly to myself at school. I did not experience my first real job until my thirties when I started as a housekeeper. It was the easiest job for me since I was already used to cleaning houses and it was a job that didn’t require me to use English as much. Throughout the years, I have learned the English language and can understand it, however, I choose to speak with those close to me, the language I was born to speak; Spanish.

As the years have passed, I realized that leaving Nayarit has offered me countless opportunities here in California. California is where I met, Gregorio Nunez, my first and only husband. Sadly, we decided it was best for us to divorce years down the line but I do not regret what feelings I had for him. We had 3 beautiful daughters together, Aracely, Verenice, and Yunuen. Those are my babies and they will forever be my babies. When I had my kids, I knew right then and there I realized that me leaving was the best thing that could ever happen to me. I felt, for the first time in a long time, that I wasn’t alone anymore. I was able to provide a future for my children where they can go to school and go to college and find good jobs for their families. I was now able to show my children that this is what life is all about, being able to make a future for yourself. I had these beautiful babies who completed me. They are passing that mentality onto their own children, who are much better off than I was at their age. I hope that my grandchildren are able to all go to college, find a successful career path of their choice and pass on the virtues of life to their children like how I did with my children.

Now, I work in a retirement center being a caretaker for the people there, being the caretaker my mother wanted me to be for the people around me. My departure from Nayarit left a permanent mark on my life as my mother passed away of a heart attack on March 31st, 1996, but it has also offered me the greatest gift of all; to create a future for myself. I visit Nayarit every Mother’s Day in honor of my mother’s passing, letting her know that Nayarit is still me and will forever be me. I tell myself everyday that it is okay to be alone sometimes, but that you’ll eventually find your way out of it. I hope that my grandchildren are able to see that and allow themselves to find the path that they want to pursue, to be able to have the life that I never could.

The interview and the written narrative were done by Maria’s grandson, Diego Vasquez, a student in East Palo Alto, CA.