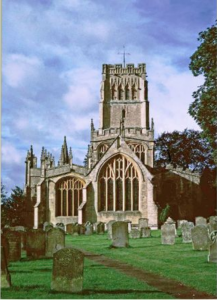 Born towards the end of World War II, Janet grew up in Northleach, a small village in England that was mentioned in the Doomsday Book of 1086. Unlike some old villages, the houses of the Northleach main street have not modernized – they remain stable and upright with their thick sandstone walls.

Janet grew up in a large house in the grounds of a former brewery. On the top floor her father raised hundreds of chickens. The bottom floor was used by her father, who sold and repaired cars for a living. As a child, Janet used to catch minnows in jam jars, play with frogs, paddle, and run down the river Leach.

The Northleach Church of St. Peter and St. Paul was built in the 1600s and served as a community hub ever since – people would meet up, socialize, and get married, baptized and buried at the church.

There was also a village center that supplied the citizens with small shops: the bakery, shoe repair, pharmacy, grocery store, and pubs.

When Janet was 17 she decided to study as a nurse at Oxford. There, she met her husband. He was a Greek Cypriot who moved to England for an education. One day, he received an invitation to work in the radiology field at Stanford for a year. Janet and her husband’s relationship escalated quickly as they got married in order to move to the United States. Janet did not know much about the United States or the “American Dream”. In fact, she even thought the Golden Gate Bridge would actually look golden. However, there was an American air force base, close to Northleach, where she occasionally got glimpses of Americans– men drove huge cars while women wore fancy clothes with painted nails and permed hair. All of these sightings were astonishing to Janet because the women in her neighborhood dressed in simple clothes and worked in their gardens.

Since Janet was Church of England and her husband was Greek Orthodox, their families decided to have two weddings on the same day in the same village church. Janet’s family sat on one side of the church where the minister spoke in English, while her husband’s family sat on the other side of the church where the priest spoke in Greek. Her wedding even made headlines in the local newspaper “Local Girl Marries Twice in One Day”. A week later, the couple got visas and boarded the Queen Mary to New York. Janet describes New York as big, noisy, and a bit overwhelming. Soon, the newlyweds were on their way to the Bay Area, California in pursuit of a new chapter of their lives.

During their first night in Palo Alto, Janet and her husband decided to explore the downtown area near their hotel. To their surprise, no shops or restaurants were open. It was only around 7:00pm, but not a single soul was out on the street. Janet even suspected that an atomic bomb had been dropped– she simply did not understand why the streets were so dull, empty, and quiet.

Janet was shocked by a lot of aspects of American culture, such as the informality of work in the hospital. Nonetheless, she kept an open mind. She described how in England, doctors were on a pedestal compared to nurses. However, in the United States she noticed that doctors and nurses ate in the same cafeteria and sat at the same table. Janet also recalls another cultural shock when she first started working at Stanford hospital. One time she saw a doctor sit down with a hamburger, pick it up with his hands, and put it in his mouth. Janet was caught by surprise as touching food with your hands was looked down upon in England. Thus, seeing a doctor– a person with utmost prestige– touching food with their bare hands, was very unusual for her.

To her surprise, there was also a slight language barrier. For example, a pram was called a stroller, nappies were known as diapers, and biscuits were referred to as cookies. Foods were also different, she had never tasted melon, avocado, or eggplants prior to arriving in the United States.

In the 1970s, after her two children had started school, Janet decided to go back to school herself and received an undergraduate degree at the College of Notre Dame. Then, she got a master’s degree at Mills College in Oakland in Child Development. During her studies, Janet participated in a book club with her friends from Notre Dame while intermittently working at Stanford in medical research. When she was 60, she got her PhD through a university in England, but completed all of her work at Stanford. In her opinion, getting a PhD was never a big deal because all of her coworkers had one as well. Janet worked with premature babies at Stanford and Kaiser Permanente for a few years until she retired. 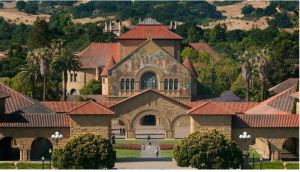 With her extra time, Janet trained to become a docent at the Asian Art Museum. While working at the Asian Art Museum she met people who were Shinto, Buddhist, and Christian at the same time. The inclusivity of the Japanese was very interesting to her because Janet grew up in a strictly monotheistic and conservative community.

Janet mentions that one of the best things about living in the Bay Area is the weather. When she first moved to California she praised the sunshine and blue skies because the weather seemed like a miracle compared to the gloomy climate in England.

Janet is thankful for all the rich opportunities that she has experienced living in the United States for 55 years. The diversity of people has greatly enriched her life and allowed Janet to see and travel the world in a more open and accepting way.Throughout all of her adventures from England to the United States, Janet always remembered an old saying from her elementary school: if you don’t succeed at first, try, try again. To this day, Janet still uses this as her life motto.

The interview and narrative of Janet were done by Dorreen Darya-Bari, a volunteer for Made Into America, and a student at Sacred Heart School.