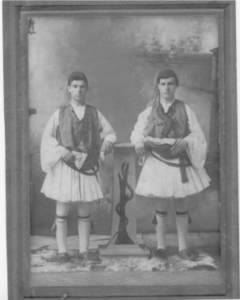 Panayotis Kalogerakos lived in Langadia, a mountainside village in Arkadia, in Peloponnesos, Greece. While it was beautiful there,  Panayotis wanted to leave Greece as a young man in order to escape the fighting that was going on in the Balkans at that time. In addition,  there were attractive job opportunities in the industrialized New England area of the United States. There, he might earn a living, and his future children would have better opportunities for education and  prosperity.

Panayotis walked over 100 miles to Piraeus, the port of Athens, and  from there, sailed to New York. When he arrived at Ellis Island, New  York, his American name was shortened to Peter Calos. Peter headed to New Britain, Connecticut, where his brother Mihalis, had already  settled. There were some large factories that might be hiring workers.  For example, Stanley Works was a large tool company in New Britain,  founded in 1843. Landers, Frary & Clark was a large housewares  company that was founded in 1865 (see photo below). They made a  wide range of household products, including items like cutlery, coffee  percolators, and stoves.

Panayotis tells this story about how he got his first job in the U.S:

Immigrant men looking for a job would gather every day in a particular  spot. A foreman would come and choose a few men from the crowd to  hire. Panayotis was passed over a few times. To make himself stand  out, he bought a straw hat and wore it the next day. Sure enough, “the  guy in the hat” was hired that day. He eventually worked at Landers,  Frary & Clark. 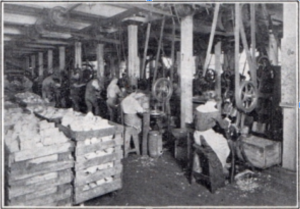 In 1914, Paniyotis returned to Greece to get married. His future wife,  Golfo, had been betrothed to him by their families since they were 5 or  6 years old. Arranged marriages were normal in Greece at that time.  Ship records show that Paniyotis and Golfo sailed from Patras, Greece to New York in 1914 on board the Martha Washington.

They settled in New Britain, Connecticut and had five children.  Their oldest child was named Peter Calos Jr, who was  my mother’s father and my grandfather. 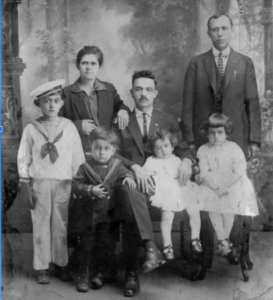 In about 1922, when young Peter Jr. was 7, the family returned to Langadia because Golfo missed Greece. While there, young Peter attended school and worked in his father’s store in the village. Peter Calos Sr. could read and write Greek, because he had attended the village school. However, Golfo refused to go to school after first grade  and insisted on remaining in the hillside fields where she took care of the family’s sheep. She loved animals, especially sheep. All of her life,  she kept a framed photograph of a sheep hanging in her kitchen. Living in Greece did not work out, and within 1 or 2 years, the family  permanently moved to the U.S. Panayotis and Golfo became  naturalized American citizens in 1938 They often said “God bless America.”

My grandfather, Peter Calos Jr. attended school in Connecticut. Greek was his first language, but like other immigrant children, he soon  learned English in school. He was a good student, but was teased,  bullied, and called “greaseball” by a few of other students because he  was Greek. Then, as now, some Americans discriminated against  foreigners. Peter worked, selling fruit and shining shoes to contribute to the family income. A child working was a common sight back then.

Although Peter Calos Sr. had not had the opportunity for much  schooling when he was growing up in Greece, he greatly valued education, along with hard work and integrity. The family was  determined that Peter Jr. would have the chance to go to college. Peter was an enthusiastic student, and as the oldest son, the whole family  worked to fund his schooling. However, his college education was  interrupted by World War II. Peter served in the U.S. Army, where he  rose to the rank of Captain. After the war, Peter returned to Connecticut and married Stella, my grandmother. Stella also came from  a family of Greek immigrants with a similar background. They met at the Greek Orthodox church in New Britain, which was the social center  for the local Greek community.

Peter and Stella had 4 daughters, including my mother. When my mother was 7, the family moved from New Britain, Connecticut to Phoenix, Arizona. My grandfather always retained his high regard for  education as the key to success and made sure that all of his daughters  went to college. My mother ended up accepting a job at Stanford  University. Thus, my sister Victoria and I were born in the Bay Area.  While we are native Californians, our background stretches across the  US, and across the Atlantic, to Greece.

The Industrial towns of New England in the early 20th century had abundant manufacturing industries. These factories needed workers  and were magnets for European immigrants. Unskilled workers could  find opportunities to be trained and advance their careers in this  setting. For example, Peter Calos Sr. started out polishing metal wares manufactured by Landers, Frary & Clark. He eventually become a  machine operator and spent most of his career working at that factory.  He retired with a gold watch and a pension. Many other immigrant  groups such as Poles and Italians settled in New Britain. My congresswoman representing San Mateo County, Anna Eshoo, was born in New Britain, Connecticut. 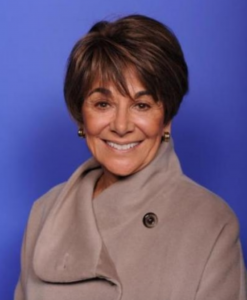 From an  Armenian immigrant background, she eventually become a member of  the United States House of Representatives, where she continues to  serve.

I really appreciated learning more about my grandfather and great grandfather by doing this interview. In 2017, I visited the village of Langadia in Greece, where my great-grandparents were born and raised. It was a completely different world there than what I know in  the Bay Area. My family has been in the U.S. now for over 100 years,  and I consider myself fully American. However, I participate in many  Greek traditions, thanks to my mother. Becoming familiar with my  grandfather’s and great-grandfather’s lives helped me to understand  how people coming from all over the world have created a diverse American society.

Peter Ellis, the great-grandson of Peter Calos Sr. interviewed his mother and aunt to write this narrative.  He is a student at Foothill College in Los Altos Hills, CA.