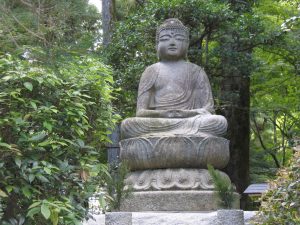 Only a few short months off his ninety-first birthday, sitting cross-legged in a recliner that he had owned long before my birth, my grandfather told me, “My life isn’t all that exciting.”

My grandfather is a private and simple man. He is the type that would much rather spend an evening watching a baseball game with a hearty homemade dinner than discussing his life story and struggles. Yet, when we did talk about his journey, I found myself astonished by what he had experience, accomplished, and sacrificed for his country, his family, and, ultimately, me.

He began by describing how his father, Genzo Yamada, came from the Honshu island in Japan just past the turn of the twentieth century at just eighteen years of age. He initially came through an education program, being housed with an American family and going to college. After this, Genzo began training as a farmer in Fresno in hopes of garnering enough savings to buy a house and hopefully marry. My great-grandfather was an immigrant who dreamed not of fame and grandeur, but opportunity and freedom.

However, tragedy struck one day as my great-grandfather, who clearing a stump with dynamite, lost the majority of his eyesight. He had set off the explosives, but, as they had not gone off, he went to investigate. The dynamite detonated. Ultimately, the explosion caused thermal burns that caused the permanent loss of most of his sight.

Still, my great-grandfather Genzo continued to work hard as a farmer and even began working as a janitor in apartment buildings to save up enough money to buy an apartment in the bustling city of San Francisco. Through long hours and determination, he was eventually able to do so, and decided then, at thirty-four, that it was time to begin a family.

In Japan, it was tradition to be married through family arrangements and so Genzo married my great grandmother, Hanako, a woman thirteen years his junior, without meeting her prior to the day they wed. He knew who she was only through his family and a single photo. The couple quickly had two daughters, Ruby and Gwen, before having my grandfather five years later.

Born on September 9, 1928 in San Francisco, California my grandfather described his early days as a typical and happy family life. He went to public school and, despite being a city boy, enjoyed playing and watching baseball with his friends. But the normalcy of this life, he said bitterly, ended at twelve years old.

When the Japanese, in a shocking and brutal attack, bombed Pearl Harbor on December 7, 1941, the American identity was shaken to its core. America, a hodge-podge of dozens of languages, nationalities, and ethnicities, came together in a frenzy of anti-Japanese sentiment. The American people, driven by fear and rage, indiscriminately rounded up and sentenced people of Japanese descent to concentration camps in the inland of continental America, paying no attention to citizenship, profession, or individual values. My grandfather, a twelve year old American-born boy who had never even been to Japan, was among them.

With his sister Gwen and his mother, he was sent to a temporary holding camp in Santa Anita, California before being permanently relocated to the Topaz War Relocation Center Site in Topaz, Utah. His father, experiencing complications from a recent eye surgery, was not well enough to travel and was allowed by the government to stay with his eldest daughter Ruby in San Francisco until he recovered.

“The funny thing is,” my grandfather said, looking away, “I wasn’t mad about being sent away because I was Japanese or anything like that. The camps weren’t too bad. We got to go to school and I was friendly with the other boys. But at twelve years old my family life went away. We were never together again after that.”

When Japan surrendered in 1945, my grandfather was allowed to return to California. His parents and himself decided to settle in Palo Alto, California, while his two older sisters went to the Midwest to go to college.

In Palo Alto, my grandfather attended Palo Alto High School for his senior year, playing on the baseball team. He graduated in 1946, but was unsure of what career he wanted to enter. Eventually, a close friend of his convinced him to enlist in the military, and so he decided on a whim to join the army.

Not even two years after being forcefully removed from his home and family and detained in a small and inadequately supplied concentration camp, my grandfather still felt American enough to risk his well being and life.

In a camp in Kentucky my grandfather underwent six months of basic training, meant to prepare him for the physical and mental challenges of military life. Once he completed training, my grandfather was sent to Korea where tensions were building between the newly established countries of North and South Korea.

Japan had annexed Korea in 1910 and had been forced to release the region in 1945. Thus, many Koreans spoke Japanese and my grandfather worked primarily as a translator between American and Korean forces. There, he was careful in how he translated each word, for one misplaced phrase could lead to a total collapse in negotiations and the outbreak of war.

When I asked my grandfather what he did when he met a Korean who could not speak Japanese he said, “The Japanese and Korean languages are very similar. The ups, the downs, and the rhythm are the same. Like symphonies.”

Luckily, after an honorable discharge when he was nineteen, my grandfather returned safely after serving for eighteen months in Korea. Once he had returned he decided that he wanted to attend college. He attended San Mateo College for one year before he got a job offer as a steelworker, a lucrative career.

After working for a year, my grandfather decided that he wanted to buy a house. With the help of his father Genzo, who loaned him $6,000, my grandfather paid the down payment on a house in Palo Alto for $12,000. In six months, he was able to repay the loans he had taken from his father as well as the mortgage on the house.

However, with his father’s eyesight worsening and his mother unable to pay the rent on their apartment on her meager salary as a maid, my grandfather’s parents soon moved in with him. By then, he had built an extra room on his house as well as a garden shed in the backyard. In the yard he had planted a persimmon, apple, fig, pear, apricot, and plum tree.

“In just one month she went from being perfectly healthy to her death bed. The doctors said there was nothing to be done, the cancer was too advanced. We took her home and just let her rest. I felt bad. She was in so much pain and I, her son, could do nothing for her. I just tried my best to make her comfortable and take away her worries. I remember holding her as she passed away. She hadn’t been able to eat well, but as I held her, I noticed how thin she was. And then she died and I called the mortician to come pick her up the next morning.”

My grandfather then quickly married my grandmother in Japan and brought her over to the states. Not knowing a word of English, my young grandmother came to America and worked as a housewife, taking over care for my great-grandfather and the household duties. After only a year of marriage, my uncle was born and only a year after that, my mother was born.

Soon after my mother was born, my great-grandfather Genzo, at nearly eighty years old, passed away from complications of pneumonia in the same bed his wife had died in. And, again, my grandfather watched quietly as the mortician took his parent’s body in the morning.

My grandfather trekked on through this set back as well, working for thirty-eight years as a steelworker. After retiring at sixty-eight years old, my grandfather had earned enough money to send his son to UCLA to become a lawyer and his daughter to the University of Southern California major in chemistry.

Today, he spends his days watching baseball and visiting his wife in a home. He insists on maintaining his independence, renewing his driver’s license every two years and living on his own. Although he is quiet, my grandfather’s stories of his parent’s immigration as well as his own struggles in America as a Japanese-American are very unique.

This story was written by a student at Palo Alto High School.