Rissa Rasnovsky was born in the late 1800s in Borzna, Russia (now Ukraine) in the Pale of Settlement. The Pale was an eastern section of Russia where the Russian Czars and government ordered Jewish people to live in. Places other than the Pale of Settlement were mostly forbidden for Jewish people to reside in, limiting the opportunities and freedom Jews had. In 1935 she immigrated to the United States, during which she changed her name. 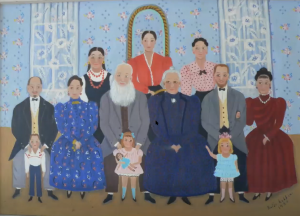 In this piece which Raisa herself painted, she shares a portrait of her family in Russia. The woman in the orange blouse at the middle is Raisa herself, the woman to her left is Raisa’s sister Zippa and the woman to her right is her other sister, Gnessa (who changed her name to Agnes). The three sisters all immigrated to the United States separately.

Joan Sperans, Raisa’s grandniece, shares how Zippa (the woman to Raisa’s left) married Isaac Mesirov after her immigration to the U.S in 1906. Zippa and Isaac had a son, who is Joan’s father. However, Zippa died when Joan’s father was 9 from a rheumatic heart. Tradition dictated that Isaac marry the next unmarried eldest sister – Agnes (the woman to Raisa’s right) who immigrated in 1910. Agnes herself had a medical degree from Russia. and Joan remembers that Agnes was a hypochondriac, constantly checking her family’s temperatures.

In the bottom row of the portrait, are Raisa’s brothers (the leftmost man and the rightmost man), one of which is Bernard who was the first to immigrate to America (in 1892). In the middle of the portrait are Raisa’s parents, Mordechi and Leah, both of whom stayed in Russia. Raisa was extremely detailed in her artwork – incorporating the wishes of her family in her pieces. For example, the rightmost brother had a wilted hand and wished to not have it be a prominent aspect of his identity/depiction, and thus Raisa included one of the children in the portrait to stand in front of him (thus covering his hand from view).

Joan’s grandfather, Isaac Mesirov, who had married Zippa and then later Agnes, also immigrated from Ukraine. He, however, first came to Canada, then Philadelphia where he had a few cousins there who sponsored his passage. Once Joan’s grandfather arrived in Philadelphia, he worked arduously in a knitting mill where he mechanically knitted stockings to provide for his family. Eventually, he became owner of a tailor shop where he had many employees. He originally had emigrated from Russia because of Jewish pogroms and vehement Anti-Semitism, alongside army conscription. In Russia, a Jew could be drafted as young as 12 years old and kept in the army for 25 years.

Joan’s dad, Leon, born of Isaac and Zippa, became a lawyer and went to the University of Pennsylvania during a time when Jews were rarely, if at all, accepted. During this time, in Philadelphia existed Jewish and Christian law firms, alongside Russian and German Jewish law firms, where Anti Semitism existed between the differing faiths, and prejudice within the same Jewish communities. He was a large proponent of good government and was part of the efforts to make Philadelphia less corrupt by working for the election of Richardson Dilworth. Leon was appointed to the position of deputy City Solicitor. Subsequently he was appointed as one of three Civil Service Commissioners. 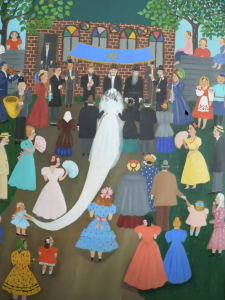 or art as an American immigrant. Prior to painting (which she started around 1933), she did batik artwork. She stopped this art form, however, when she was told she got tuberculosis from the dyes (a diagnosis which proved later on to be untrue). She switched to painting. Her painting revolved around her memories of Russia and also of Jewishness. Here we include one depicting a Jewish wedding ceremony and Tashlikh, a ritual at the end of Rosh Hassanah, the Jewish New Year, where the worshipers symbolically throw their sins into a source of water. 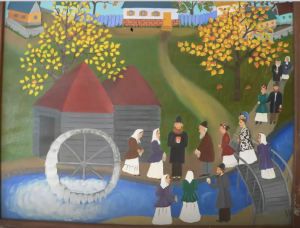 She garnered acclaim for her pieces, presenting in solo and group shows in Philadelphia and New York. Her artwork has been shown in the Carnegie Institute, the Jewish Museu. Articles in the New York Times and the New Yorker discussed her work. Raisa continued to paint throughout her life, dying of Parkinson Disease in Langhorne, Pennsylvania.

Raisa’s love for artistry, however, did not die with her. Joan, who shared this story of her great aunt, took classes at the Philadelphia Museum of Art, studied fine art and art education in college, and went on to the Tyler School of Art where she majored in crafts. Joan learned metalsmithing and created jewelry by hand. She taught metalsmithing at Berkeley Extension and at Los Angeles Junior College. Part of her passion can be credited to her great aunt, a prominent Judaic artist even now, years after her death.

The story of Joan’s paternal family’s immigration process is one filled with the history of the Jewish identity and struggle throughout history. From the pogroms and restrictions on where Jews could live, to Anti-Semitism here in the US, her family’s story chronicles the journey taken to try to find opportunities and a better life to future generations. 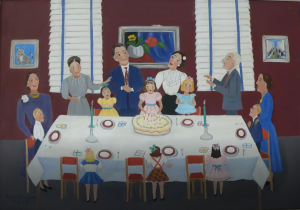 This story was written by Elisa Shaholli, a student at the University of Connecticut who is volunteering as an interviewer for Made Into America.