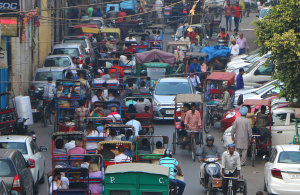 A mother, born in the heart of India but grew up in a different country every year. A father, born in small-town India but grew up in Zambia. A mother whose father was in the navy and grew up eating a wide variety of foods. A father whose parents were strictly vegetarian and won’t kill a fly. A mother who was bad at math and history. A father who failed accounting class whose own father was an accountant. Somehow, 20 years after their birth they found themselves in America. How did they end up there?

It was her big day. Bags packed and good wishes sent, my mother was about to take a flight to America by herself. She had gotten into the University of Austin, Texas to get a masters degree in architecture. Of course she was nervous, but as an independent woman who had been traveling and exploring her whole life, this was no different. A few hours before she had to leave for the airport, she took a car with her dad to go say bye to some friends. Then she lost her boarding pass.

He had never really travelled much. As a small child he flew from India to Africa once, a trip to move. He went to college in the United Kingdom for four years with his sister nearby. But compared to my mother, my father wasn’t big on travel. However, in 1980, everyone around him was excited for his trip. He was going to America, all by himself to finish his education. He had gotten into Penn State University for his masters degree in electrical engineering. He left Zambia with anticipation and good wishes, headed for the United States. But many hours later and many thousands of miles away from home, he found himself in Canada with a visa that wouldn’t let him enter America.

For a couple centuries now, people have been coming from every corner of the world to the United States. Some come for family or job opportunities. Some are seeking asylum or running from cultures that won’t accept them. However, many people taking a flight to America are coming for education. Whether it’s high school, college or something else, people come to the United States to learn more about the things they are passionate about. For both my parents, this was the case. They came to America in their twenties to earn their master’s degrees in their respective fields. Then, they stayed for the next thirty years.

And yet they thrived. A father who had lived his whole life beside his parents soon navigated himself through city streets in a country and city he was all kinds of new to. He grew up in suburbs but handled the Pennsylvania cities, and then Texas cities like a native. A mother who had been traveling all her life shocked people by the fact she was a new immigrant because her confidence led her through Austin, Texas like she’d spent her whole life there.

A mother and father who only expected to stay in America for the duration of their education. A mother and father whose only hopes and dreams were to be able to do the things they loved for a living. To be successful in their home country. And yet thirty years later they still live in America. In states they never would’ve imagined. They’ve travelled even more now. A mother who has been traveling all her life. A father who has gotten over his fear of flying. They survived their immigration story. They made it through and don’t regret it. They are proud of who they have become and they know that’s enough. They brought children into the world and taught them both sides of themselves. A mother and father whose children know the dance to cross the streets of India and who know how to eat healthy amid the fast food. They built themselves a life and built two more lives, a girl and a boy.

This story was written by their daughter, Kaahini, a student in Palo Alto, California.