A Nurse from the Philippines 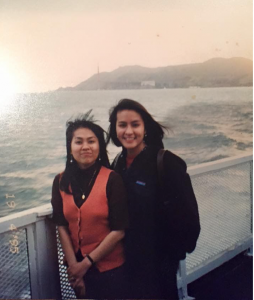 My mother, Marigold Suico (née Villaroya), was born on November 7, 1968 in a small town called Cagayan de Oro in the Philippines. Her father was an attorney and her mother was a stay at home. My mother’s story was slightly unconventional compared to the other immigrant stories I’ve heard about. By comparison to her life in the United States, her life back home in the Philippines seemed far better. She always told my siblings and I stories of her extravagant childhood and having maids and drivers, so it always confused me as to why she would want to leave her life in her home country to live a middle class life in the United States. It wasn’t until my interview with her that I finally understood. My entire interview was conducted via Facetime because my parents live in Vallejo and I live in San Diego.

Her mother, Lita, had just separated from her father and had moved to the US in pursuit of better opportunities. Lita said she had been a stay-at-home mom her whole life and wanted to do something out of her comfort zone after her divorce from my grandfather. Apparently, she decided moving to America would be the best way to break out of that comfort zone. Lita was living in America and working as a caretaker for a wealthy old woman in Atherton, CA before she petitioned for my mother to come to America. My mother explained that back then, it was easier for a parent to petition for their child to come to the US if they were under 21, single, and unmarried. Marigold fit all of this criteria and the process took under 7 months.

After working in Atherton, my grandmother worked at various other old ladies’ homes as a caretaker. She wanted to be a caretaker because she used to volunteer at hospitals in the Philippines and caretaking was all she knew how to do.

My mother, Marigold’s first job working in the United States was as a bag screener at SFO International Airport.  Throughout the next three years, Marigold worked several odd jobs before she finally became a registered nurse in 1992. Her first job as a nurse was at a rehab facility in Oakland, CA. When I asked her what the hardest part about leaving the Philippines was, she stated that there was a lack of community here in America compared to her small town. Back in her hometown, everyone knew everyone and people were a lot friendlier. She was shocked to discover that most Americans (depending on the neighborhood, I suppose) don’t know all their neighbors and don’t say hi to everyone they pass on the street. Another big culture shock for her, which I found particularly hilarious, was that she found the amount of PDA here to be too much. When I asked her to clarify, she stated, “I couldn’t believe how many people held hands or hugged in public. It just wasn’t a thing back in Cagayan.” 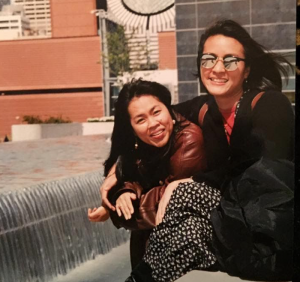 Marigold (left) and her sister, Candy.

Interviewing my mother brought me a lot closer to her and really made me appreciate everything she sacrificed for a better life for my siblings and I here. To this day though, she’s still not a citizen. She always just ends up renewing her green card every couple of years when it expires. My father, on the other hand, got his citizenship years ago when his green card expired because he decided it would just be easier than to keep renewing his green card. Before our interview ended, I made a promise to her to pay for her citizenship application.

As for my mom’s sister, Candy, she came to America a couple years after my mom immigrated. She got a degree in physical therapy at Fordham University in New York City, where she met her husband. Now, Candy is a stay at home mom in Connecticut and enjoys baking in her free time.

This interview and narrative were done by Marigold’s daughter, Keanna Suico, a community college student.