A Leap Into the Unknown (Philippines) 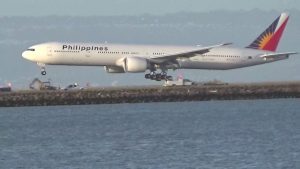 “Please fasten your seatbelts and prepare for landing. Thank you for flying Philippines Airlines,” the flight attendant announced. I looked out the window astonished at how different California was compared to my native home, the Philippines. I glanced at my brother and he was fast asleep with his mouth open. I thought to myself, this is an unbelievably exciting time, how is it possible that he can sleep on this flight? I must have glanced at my watch a million times just to see how much longer before touchdown. Then it happened, we finally made it to America, the
land of opportunity and dreams, where anything was possible.

This had been our wish for so long, a common goal. We had spent countless evenings at the local café after school formulating our future plans. Now this is becoming a reality. I may have to actually pinch myself to believe it. It all happened so fast. Thump, thump. The heavy envelope hit the marble floor, and our dog started barking loudly. “It’s here, it’s here!” my brother exclaimed with delight. He had been waiting for this moment his whole life, as it has always been his dream to attend university in the United States. The envelope was large, which sparked a certain excitement in me, as I was aware of the size of acceptance letters.

As he read the letter, I saw how his face brightened with joy, but in an instant completely changed. “How am I going to move across the world all alone? I won’t know anyone or how to do anything. This is my dream I have to go,” my brother contemplated out loud as he was overwhelmed with this sudden choice that would decide his future. I watched him from across the room struggle with the pros and cons of this decision. Immediately, I had this brilliant idea. It was my last year of college and I had been contemplating on what to do next, and that’s when I realized that I should immigrate with my brother. I explained my marvelous idea to my him, and he was delighted to have his best friend move with him.

“Miss, how many customs forms do you need?” the flight attendant asked. “Just one,” I responded, snapping back into the present. As I looked at the form, I began to feel the sudden responsibility that was put on my young shoulders. I was now fully responsible for not only myself but my brother, as well. I am only 22 years old, I thought to myself, and I have never lived away from home. Can I actually do this? It will be a completely new experience, and I will know no one and will have to suddenly be the responsible older sister.

I am still baffled that my parents agreed to let me move to the United States with my brother. I would have never thought they would. I remember the day like it was yesterday, my brother and I had finalized our plan to present the idea to them. We had butterflies in our stomach as we had already gotten our hopes up that our plan would actually work. My brother decided to write all our points down on an index card so we look prepared and don’t forget any key points. The time finally arrived, and I stared at myself in the mirror, trying to pass time. My long, glossy black hair was parted down the middle, falling down my shoulders. I carefully buttoned my green flowy top, as it was newly ironed, and checked my outfit in the mirror one last time. I put a lot of thought into my outfit and was sure to wear my mom’s favorite top. I slipped on my shoes and walked into the living room.

Some of our friends were crouched behind the couch and while others were hiding in the rooms, peeking out. I could hear them breathing heavily, and I instantly knew that they were feeling the same way we did, which made us even more nervous. As I looked around the room, I saw my parents sitting on the couch in deep conversation with each other, my brother anxiously reading over the index cards, and my friends doing silent cheers in the background. In that moment, I realized that the chapter of my life of living at home had come to an end. That was the turning point, it was then that I moved into the next phase of my life.

Since then, a year has passed, we completed a semester at the university. It was now the holiday season, and I was finally starting to feel at home. As I walked through my favorite mall in Stockton, I glanced around and saw people Christmas shopping with their family. I noticed that a majority of the people around me were immigrants and I felt proud to be one of them. My life was finally where I wanted it to be. I was happy living in the United States, and was so glad that I made the choice to move. As I looked around, I realized that whenever you have a one in a lifetime opportunity, you have to take that leap and take the chance even though it might frighten you.

This story is based on an interview by Ayesha Jain, a student at Palo Alto High School.